If there's one undeniable truth I've learned in design, it's that big numbers always look cool. It was always the plan to put some on the Bastion, I just never figured out how I was going to do it as the shape pretty much precluded that possibility. A lot of the time spent on the quad guns was a stalling tactic trying to help resolve how I was going to put the big numbers on. In the end I just measured two panels and then put a number in it with the stencil text leaving a hand join between the two. I then cut them out but given how it was a font that was used in Word it meant I was beholden to the stencil gap - if I'd done this in Illsutrator [which would have taken about 5 minutes] I could ahve then turned it to outlines and then split the two parts and given a better gap to work with. However, the stencil was put in place and a coffee stirrer placed on the insideof the corner to act as a 'paint shield'. This gave me a sharp enough edge and a consistent gutter between the two halves. 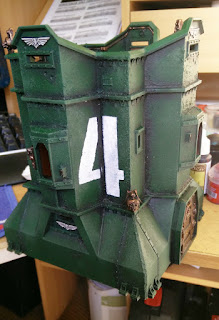 Bastions 4 and 9, I then added some paint drips and started to apply weathering similar to the Aquila Lander/Imperial Knight. 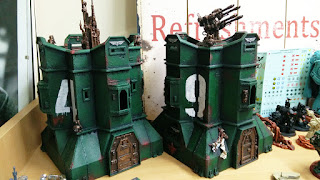 The Quad Gun also progressed and I picked out all those circular doodads as orange for no real reason. 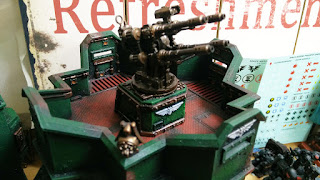 The other side of the bastions. Number 9 had some Gun metal applied, similar to the Lander but immediately I regretted it as weathering of this sort is not exposed metal, it's just dirt and rust. I added some Typhus Corrosion to try and cover it up.

Gilbert approves of this remedial action, it;s still nto right and I'll try some orange rust on it too but it's progressing. 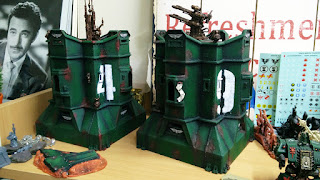 I just have to bring number 4 up to the same point then there are a lot of small details to do, which won't make much progress shots but will take significant effort. Verdigris will be one of those but it may be a little different this time around... 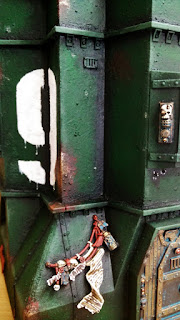