The irony of posting these WiP shots of the gravitic plates underneath the Land Speeders is that the subsequent efforts over the weekend meant I applied the anti-shine varnish on the 28th August, the day of the new Hobby Season! That just goes to show I was dilly-dallying for good reason, any of those days I avoided working on the Speeders could have resulted in a 2015/16 stamp instead of a 2016/17. The fact is it makes no difference either way, borne out by my inability to feel dismayed they weren’t completed last season or happier they’ll ring out the new season in style. The reality is I’m playing the 'To Done' images out in my head and that mental celebration is a win regardless of 24 hours hear or there. 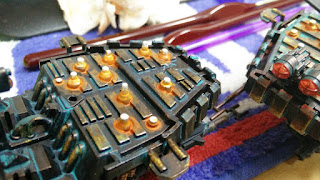 The glow effects were not as straight forward as I'd imagined. Orange was always the first choice, red was considered but with the red lights I thought it'd confuse matters. I must remember to always do the Macharius Solar orange glow though. When thinned it really does add the 'halo' effect, whereas the darker craft acrylic when thinned just sticks to the crevices. You cannot make the glow with it alone, it just defines the shape. 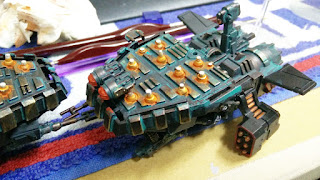 With the varnish dry I was not happy with the anti-shine finish, too many brush strokes were visible. This is a recurring issue on the black, particularly flat surfaces where there is no place to hide. So I cranked out the airbrush and tried to be a little more careful than I was with the Nephilim. In fact I think I had to spray on even more varnish but luckily it didn’t go ‘dusty’ [on initial inspection at least]. The second coat did at least manage to even out the varnish and cover the brush marks. All that remains to do is Tamiya Clear Red X-27 the lights, Tamiya Clear Orange X-26 the targeting lenses and then take the To Done pictures and I can get my first Big Purple Stamp of Approval.