Its a bit difficult at the moment to actually collate what I'm up to as I'm doing three or four things in any one painting session. So it's difficult to show progress and we're already at part 12 of this Knight. Anyway, I moved on with the chest plate for Euronymous. All the green has been done, I could probably use this piece as a test bed for the battle damage too. The scrollwork has been base coated and washed. 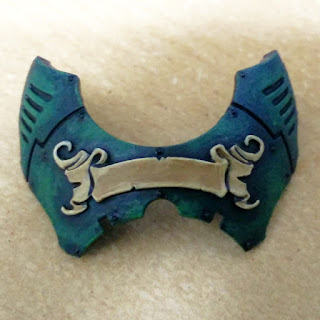 I then went in with some more highlights on the scroll and picked out the rivets in bonewhite, which matches my greenwing. 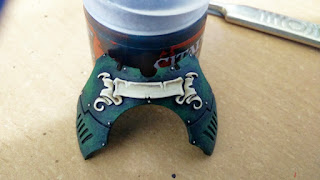 I'd pencilled in the name beforehand so I knew it could fit. With these sotrs of things it's always best to start in the middle and work your way out unfortunately I still managed to cramp up the end with a large amount of space at the beginning! It's not pretty but I surprised myself by achieving it so I can live with the less than stellar penmanship ;) 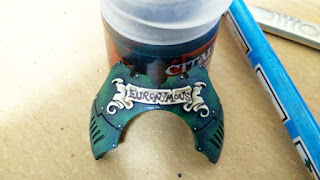 In another session I added some extra highlights on the bronze on the carapace, I also did the shoulder panels too but need to do the rest of the metallics and also on the Ravenwing. If I can get all these metal highlights done that will be a massive step forward. Having completed some of the panels it would join up with those elements still to highlight and the end would almost be in sight, it;s very exciting. 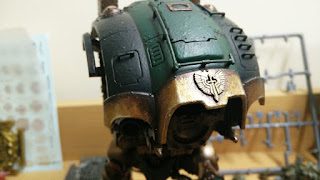 I also spent a session blocking in the chevrons on the Gatling Cannon and fist, I may well wish I'd gone orange and black at some point but these will ultimately be yellow and black, with the frotn of the cannon being all black which I'll decorate with decals. 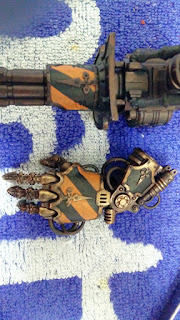 Again, this shouldn't be my focus as it can't feature in my Double Trouble list but I'm just going with the flow and with it not being the sole thing I'm painting in any given session I don;t feel too guilty about it's inclusion in my schedule.