Painting the feathers on the Ravenwing should not be my priority. I seem to be saying that a lot actually. The bikes themselves are but the wings should really be done after I've finished the metals and the black because I'm clearly going to screw it up in places. However I'm having a lot of fun with it so I just carried on. 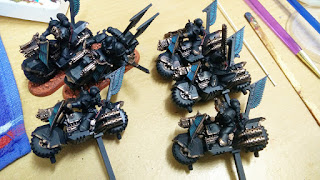 I'm playing with the paint in places. The 2nd generation Anita's turquoise looks quite opaque but goes on almost transparent so it's almost like it's been pre-thinned. I apply it and then do a second pass which makes the colour more pronounced and a third pass really gets the highlight. I also chose a different technique on one bike and subsequently applied it to two other so if there was a difference it could be contained within units. For this I did a first highlight using Army Painter Hydra Turquoise. Now this is slightly darker and bluer meaning when I applied second and third highlights with the Anitas I got a subtle shift in tonal range. Then added a black wash and a final pick up of highlights. Whether it's noticeable now and therefore worth doing I'm not sure but it was enjoyable at the time. Metals and black next... 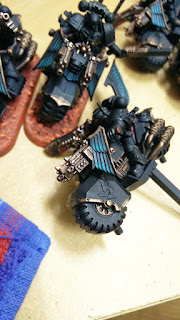 I also moved on with the resin base for the Nephilim/Dark Talon, washing the Red Oxide Primer with Army Painter Strong Tone. 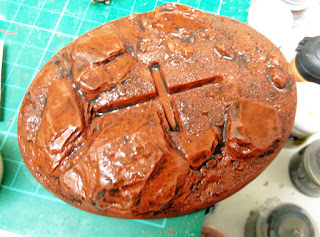 Then it was Vermilion craft acrylic for the highlight. 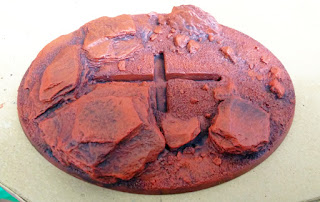 Followed by my first pass Vermilion and Pumpkin highlight mix, just about evident from these pics. 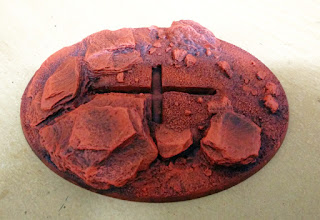