Having completed the Tactical Marines I'm struggling to be motivated, that translates to two nights without painting and STILL staying up post midnight - what's THAT about! Luckily the muse evetually finds me and although the Knight should be way down my list I'm compelled, which is good enough. The Ion Shield was at this stage prior to my lack of motivation but it's much better than I expected. 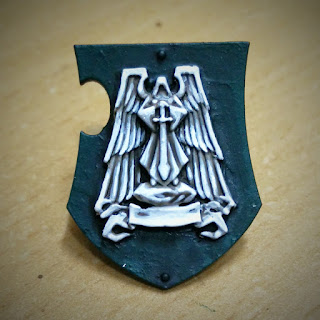 I'd also done the chainsword, all the greens highlighted at least. I did however add the black stripes for the Gerantius connection on the carapace. It may be too soon but I felt I needed to be laying paint down even if it requires a touch up down the line.

Another shot of the chainsword, I think the highlights are a bit brighter than my Tactical Squad but I'm OK on that, the texture paint makes it less lake some Tron cos-play outfit. 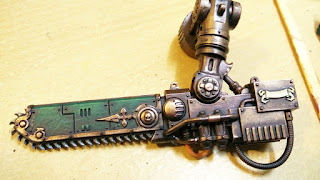 I also did the head cowl, which was more like drybrushing really, which usually I recoil from but it's not as bad as it could be. Still so much detail to pick out that will help mitigate any of the deficiencies 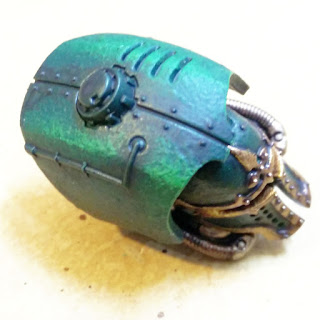 But with Renegade in the offing I want him done, even if his priority is well below the needs of the Dark Talon and Ravenwing bikes. Something else I noticed is I've done all of my alternate weapons with green armour plates. Which is fine, it's just should I ever get another Knight so I can expand my House Raven household then the green paenls will clash. So I'm debating whether to go ahead with the green, replace it with black - which will fit both households or go Chevrons, which will still work but lean towards Raven. It's only the Gatling Cannon, Carapace Weapons and Thunderstike fist that are an issue, I just need to weigh up aesthetics versus versatility.