I hadn't intended writing this as a battle report but I think there are some pretty cool things that happened so it may well become one. My army was:

The low down:
Compared to Ben's army this didn't feel like very much and as he's got Leman Russ's, Basilisk's, Wyverns and Heavy Weapons Teams my army was pretty much outgunned. 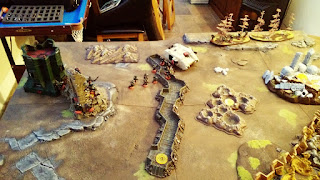 Oh yeah, he also had a Quad gun, even though he didn't know I had decided to take my unfinished Dark Talon! 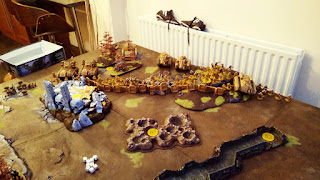 I was more conservative than usual with my positioning of the scouts. 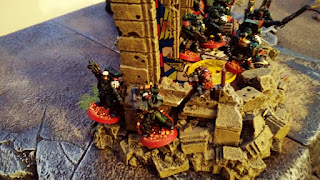 But they did look cool in the ruins. 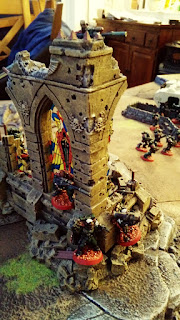 First, turn and with Land Raider potentially falling in Ben's turn I went flat out through the craters, passing the dangerous terrain test. Unfortunately I couldn't do anything to the Quad gun so I concentrated on the Hellhound. The Devastators managed to get 2 hull points off it. The Tactical Squad Missile Launcher failed to glance and the Plasma Cannon missed. The bastion did pick off a Guardsman, and the Scouts took a few. My cards were pretty ropey, kill Ben's Psyker, kill 1 or 3-5 or 6 units and I think to hold all the objectives, which I discarded. 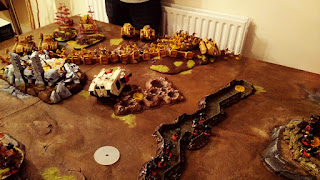 The Hellhound got to kill the Scouts, it's Flamer killing all but the one on top of the ruins, who was picked off by it's hull mounted Heavy Bolter - First Blood. Ben's Wyverns removed the Devastators :( Tactical squad in the woods get reduced to 2, fail their morals check and run off the board! Tactical squad in the Ruins have their Plasma Cannon marine shot off the board too. 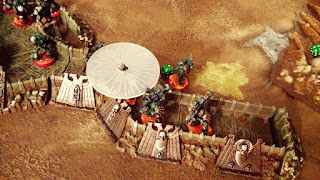 The Leman Russ Targeted the Land Raider and it managed to survive with 2 Hull Points damage and a wrecked Assault Cannon. I feverishly consulted the rulebook... My turn 2 and the Dark Talon arrived [after Warlord Trait re-roll], the Deathwing also arrived [again after Warlord re-roll] but then mishapped after teleporting onto Ben's psyker, who I'd laughingly suggested was a Fallen. Turns out they were very interested in him and managed to return to the orbiting strike cruiser to come back again next turn. 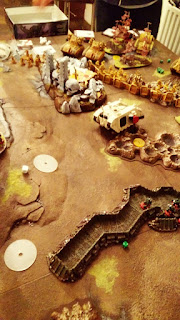 With the Dark Talon at risk from the Quad Gun I had only one option TANK SHOCK! I passed my dangerous terrain test to get off the craters, passed the next one to crash through the Aegis. 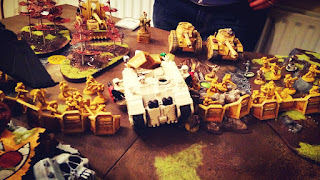 The guard scattered without injury but with the Quad Gun unable to move it was destroyed instantly - CRUNCH! [At least that was my/our interpretation, it's not a vehicle so it isn't rammed either]. Unfortunately, having used up so much speed I couldn't do anything else. The Assault Cannon was gone, the Flamestorms can't fire and the Terminators can't get out. The Techmarine failed to repair the Hull Points. 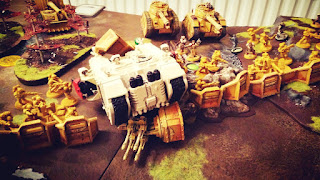 Having avoided the Quad Gun the Dark Talon opened up the Rift Cannon on the Leman Russ Vanquishers. Rolled to scatter, got double two so it hit both tanks. Rolled to pen and got another two 2's, then I remembered the main reason I wanted to use this afterall. Doubles on the scatter get me VORTEX! So the second roll becomes the Destroyer table rolls and I get two D3 hull Points on the Squadron, I get a 5 and 1, destroying the nearest tank. 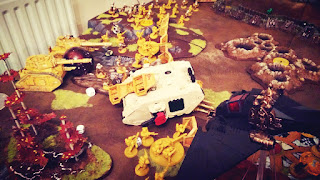 Ben's turn, the Vortex moves in front of the Aegis, killing one Guardsman [I love this] 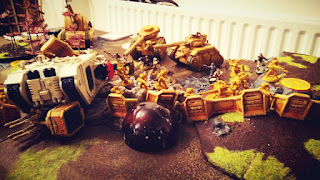 The Dark Talon manages to evade all incoming fire, without even resorting to Jink. 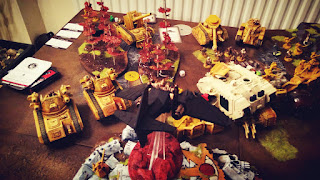 The Basilisk takes aim at the Bastion [because I'd retreated the remains of my Tac Squad into it]. 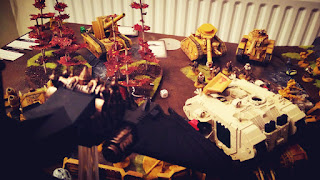 The Bastion collapses, leaving just two marines alive, they bolt and run back 8" before regrouping. 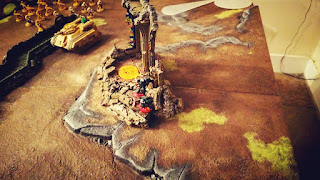 My Turn 3 and the Deathwing arrive, this time safely in the woods deep in enemy territory. 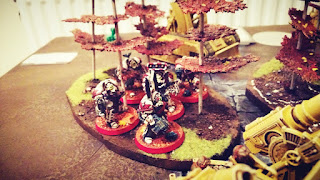 I manage to get a couple of Hull Points off a Wyvern. 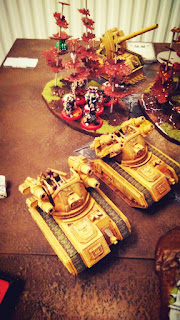 The Vortex continues it's merry way. I try to move the Land Raider and it becomes immobilised on the remains fo teh Quad Gun. The Deathwing sally forth with the Librarian. The libby psychically screams at a command unit of five Guardsman killing all of them. The Terminators manage to destroy the Basilisk with a perfect 7" charge and another unit falls allowing me to get D3 VPs, getting 2, plus another one for claiming and objective. Meanwhile the Librarian gets killed assaulting the other Command squad, overwatch did not help. 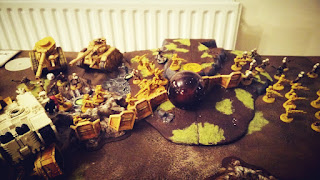 The Chaos G.O.D.s are a capricious bunch as the Vortex scattered directly on top of the last remaining Vanquisher, but I only rolled a 1 on the Destroyer table meaning the leman Russ was left with a Vortex hat! 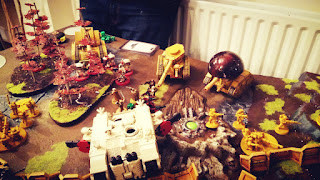 With the Land Raider wrecked by Haywire grenades from the Skitarii the Techmarine abandons it and takes out most of the Heavy Weapons squad. The Terminators scramble over the wrecked Vanquisher to assault the remaining tank only to be overzealous and the resulting pummelling from powerfists blows up two of their own! 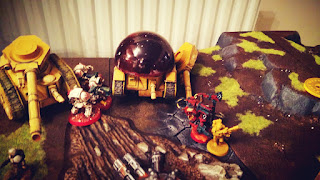 On the other side the last remaining Terminator assaults the second Heavy Weapons squad but nobody does anything. 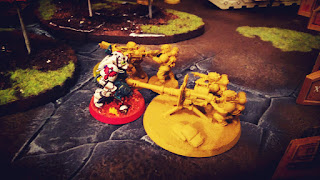 The final score was 14:4 to Ben, his Maelstrom cards were a damn sight more forgiving than my own but even so my army was pretty much outgunned and outmatched. The Dark Talon was pretty cool, but it was pointed out that with a tank killing S10 AP2 Rift Cannon and infantry killing double Hurricane Bolters you're going to struggle to utilise both weapons on the same target, which is unfortunate. I love the Vortex though and although 160pts is quite expensive I'm sure I'll be taking one just for the lolz. That said the Bastion was an utter waste but I really don't have anything to replace it with points wise and at least it increased it's unbroken record of not surviving a game.

A lot of things failed to perform, but most didn't even get chance to as they were wiped out first turn - Scouts, Devastators. This is still a steep learning curve for me, every marine is valuable, I can't sell them cheap like Termagants and they run away too! It amazes me they're the 'basic' choice for beginners. It's definitely making me look with fresh eyes at the nids and the things that do work but although I was 'crushed in defeat' I did really enjoy trying something different for a change.
Posted by 40kaddict at 12:08