Dark Angels - Tactical Squad 'pushing through Vs go with the flow'

I’ve been advocating ‘going with the flow’ for a long time now. When the muse strikes it is always much easier and more productive to go with it than to force yourself to do things less appealing or more difficult. Quite often you can harness s this power of procrastination to deliver something else and that’s perfectly valid and worthwhile.

However, it’s worth noting that ‘pushing through’ is something we shouldn’t always shy away from. Case in point I finally painted the second set of highlights on just three Tactical marines the other night. This has been a task I’ve been avoiding, in fact I’ve a number of those that are all vying to be ignored and when it was a toss up between containment spikes on the Tyranid VSG or paint a few Dark Angels I had to give the First a little attention. There were perfectly sensible reasons for making this decision, afterall the VSG is just a vanity project, it’s not something I need to do or is particularly urgent. The Dark Angels are needed, long overdue and as I could run 750pts of them at Alex’s Double Touble event I really should have some options. And, I don’t want them half-finished as I’ve been playing with them like this for a while.

Now I often envisage this ‘pushing through’ as wading through treacle or quicksand, it’s a mental picture that just helps me to overcome the creative inertia. You can feel it’s a chore, it’s not coming easy, every step forward needs to fought for and pushed kicking and screaming into existence. But three figures down I felt such a relief, such a sense of achievement. Hopefully I can do another three then finish the last four, or do the four and it’s the easy finish? I could even switch to a 3, 2, 2, it doesn’t really matter it’ll progress slowly but eventually the drag that is holding me back will loosen, the project will advance and eventually you’re no longer up to your waist in the thick of it – you’ve reached solid ground.

With all that in mind I can look at the remaining 7 models and not be completely disheartened by the bulk of the work that still remains. It’s far from easy and often the effort to push through just isn’t worth it, not when a quick side-trip to something familiar will result in more progress [my recent Termagants for instance] but these detours are useful for morale. The ultimate driver for your own progress is your state of mind - the tougher the slog the easier it is for your mind to just want to give it up. For most of us this isn’t a job it’s a hobby, it’s supposed to be fun, there are some tasks that feel more like a chore but if you can find a balance to overcome them it can be just as rewarding, if not moreso than those quick wins.

Keep on painting, while I have this left to do... 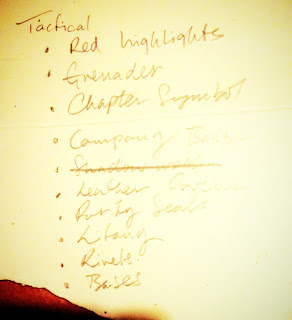