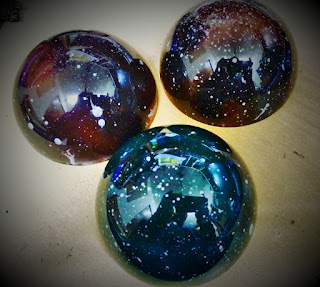 Despite the arm pain I actually managed to do some bits. In fact because I took the day off to see the doctor I had some free time and in a moment of madness I just decided to knock out a couple more Vortex templates. Having enjoyed the fun of them in my last game I'm hoping for a number of doubles in future games and I though three would be sufficent. I originally completed the first one in July last year and had put aside a couple of the Christmas baubles the other day.

Sadly I didn't take any pictures this time but I did adapt how I made them, without considering the original tutorial:

Having not referred to the original bauble first  I also noted:
I'm really pleased with the two extra templates, the uniformity is a minor irritation but for a 20 minute job I was really chuffed. Should I need any more I know I can get them done in a jiffy :)
Posted by 40kaddict at 12:16