Yet MOAR! Tuesday Nights all right for fighting

With PeteB on nights this week it gave me chance to arrange a game with Ben, who I haven't played since way before Throne of Skulls back in March. Trying to get in another game with my Blog Warslist ahead of Saturday but once again using 7th Edition rules but playing Purge the Alien so the version differences didn't have as great an impact. I have to say 1850pts is a nightmare, it takes so long to set up, we started rolling dice at 8:30pm and had only finished turn two, two hours later! Blog Wars has a 2.5 hour time limit.

Once again this isn't a battle report just an overview, interspersed with pictures from the initial deployment. Ben was running Orks, with Ghazgkhull, some Cyborks, Kommandos three trukks ad Dakkajet, three Killa Kans, a war trak, buggy and Void Shield Generator. I deployed first and was able to get first blood, on Ghazgkhulls sweet ride, so turn one was quite successful. PeteB had suggested last time I needed to be more aggressive with Deathleaper [although in his three games he's got into combat relatively quickly and died equally as fast with only a mullered Beastmaster to show for his efforts] so he was deployed in the open in the centre of the board to help my Mawloc arrive somewhere cool. 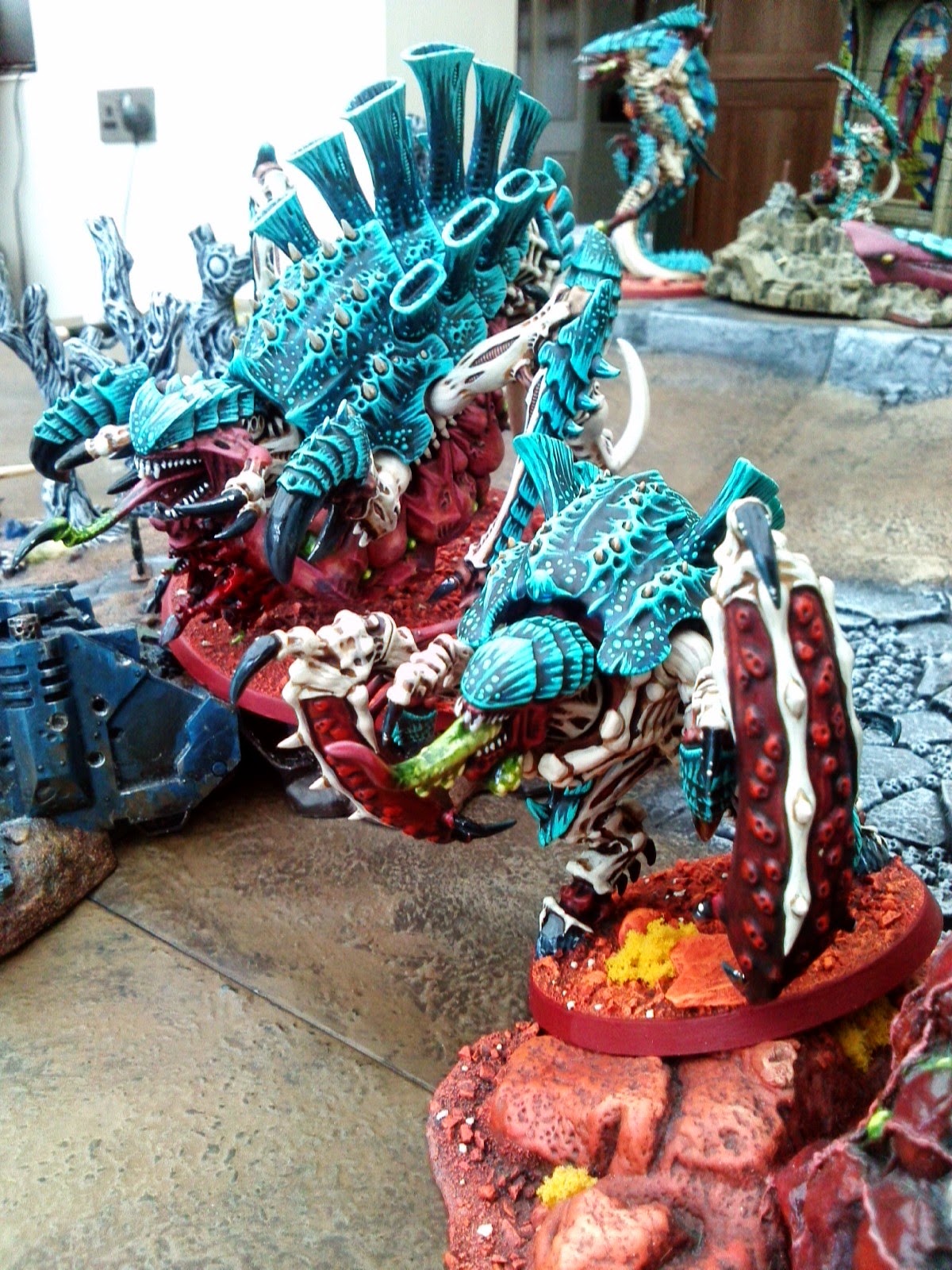 The psychic phase wasn't amazing because Ben had no psykers so his only option was to try and nullify my efforts but I seemed intent on applying the most randomly inappropriate power to a situation - Ghazgkhull with -3WS while facing Deathleaper, I'm not sure that made any difference. Giving Catalyst to Termagants where they couldn't get in range of a unitand the Carnifex standing not far away could!

Ben had a pretty rubbish turn one and things were looking positive when the  Malwoc arrived. I had a choice to take out a trukk full of Nobz or go for the recently disembarked Cyborks and Killa Kan in the forrest. I went for the latter, scoring only 1 wound on first attempt and 2 on the second. Cyborks 5+ invul and FnP from the Painboy was very effective. So effective I rolled on the mishap table because the Mawloc couldn't be positioned and got a 1! 140pts of damage to myself! The only solace was that if I'd have chosen to attack the trukk it would have been equally ineffective. In fact as a transport it would more likely cause a mishap because even if I manage to explode the vehicle and the Mawloc is AP2, so there's a chance, the models are positioned where the vehicle was, i.e. where my Mawloc is deep striking! We've come to the conclusion the best way to use him is to just clip the edges of the blast template with your target so it may have space to actually deploy if it kills it but that reduces the effectiveness of it's Raison d'être, non?

For pretty much the entire game I was shooting with impunity, I amanged to take out two of the Killa Kans so things were looking good. It was in assault I was failing and if Ben's appalling charge rolls had gone the other way I'd have been finished off much quicker. Ghazgkhull suffered one wound to Deathleaper and then promptly swatted him like he didn't exist. He then did exactly the same to my Carnifex and got the hat-trick by smashing my Bastion to pieces, taking the Quad Gun with it and putting 3 wounds on the Hive Guard inside! The Great Maw managed to wound every single Cybork once but not enough to get me the VPS for at least half the unit and he was shanked by the Painboy who managed to multi-task like fiend - killing Monstrous Creatures while administering solder and Savlon to the Cyborks so that they hardle ever failed a FnP roll. Not to mention the period of Fearlessness when the WHAAAAAAGGGHHH! was called. Then when the Great Maw popped it took enough Termagants with it to tip the assault they were in in the Orks favour.

The Flyrant was the king of the skies for the entire game. The Dakkajet, after losing one of it's weapons to Interceptor from the Quad Gun managed to stil put 6 wounds on the FMC but it saved them all and every other wound for the entire game. It Vector Struck the Ork flyer in return but could do nothing so shot it down with the remianing Brainleech fire. 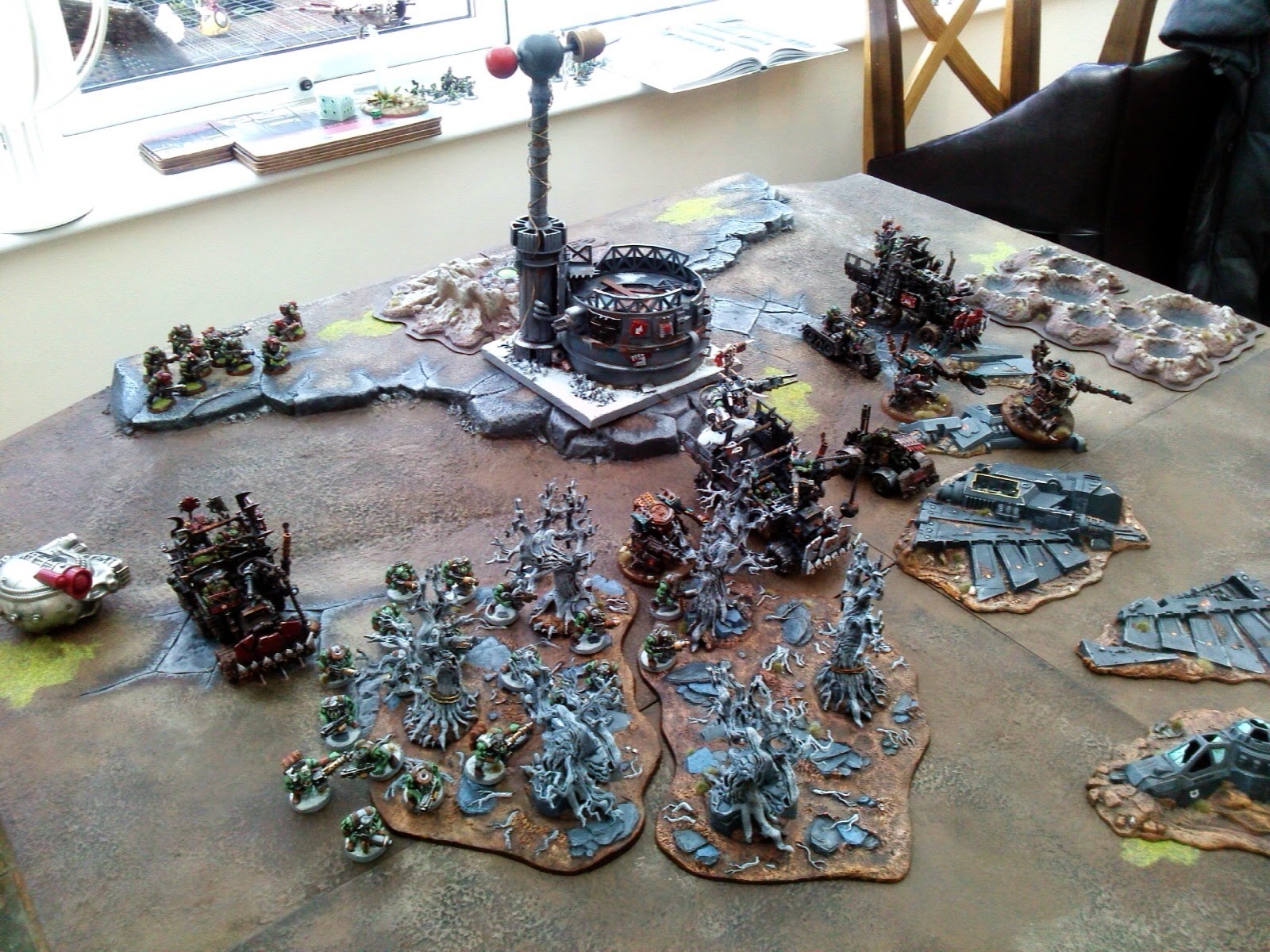 By the end of turn 3 or 4 I called it as it was after midnight. There was very little that I had left but I thought I'd been quite effective throughout but it transpired I'd killed just short of 500pts worht of figures to Bens 1400+ which is probably worse than I scored in the same mission at Blog Wars 6. It seemed that the stuff I had killed didn't cost a lot and despite all the wounds caused often it wasn't enough to cover 50% of the unit cost which would at least get me 50% of the points according to the rule pack.

So I'm two for two in my last four games. I really learnt a lot in this one. I finally realised that the new 'nid Codex contains one massive red herring. It is undeniable that the likes of Move Through Cover and Catalyst have made us quicker and 7th Edition removes some obstacles like carging through Difficult Terrain. So although my early nid experiences were always concerened with closing that gap to assault now we can do that much easier. But therein lies the con, we are not good in assault, or at least what I have in my army is not good. Tervigons just don't cut it with only three attacks. My only success was the Crushing Claws Tervigon blowing up a Trukk but it's occupants [the Nobz] survived and systematically butchered it over the next couple of turns. We may be able to close ground now but what have we got that can get the job done when they get there?

So I think I have to think conservatively again. Particularly for the tournament in that my Bastion does not confer Victory Points so I may as well capitalise on it's cover, hide behind it and force my opponent to come to me while ranged fire - Biovores, Brainleech Devourers, Hive Guard and Quad Gun do their bit. Lets see if my experiences make any difference on Saturday.
Posted by 40kaddict at 12:03