I've actually had two games of 7th Edition with PeteB now. We were going to continue with 6 until Blog Wars [as that's the ruleset they'll be using] but Pete has had his shifts rearranged so wouldn't be able to go. It's not really fair to keep forcing 6th on him when there are new rules to try out and get your head round, so I suggested we play the 'Purge the Alien' mission, given the changes to scoring units this will have less impact on my preparations. We'd play all the new 7th Edition rules with psychic powers, I think I can live with that when it comes to reverting to 6th.

Pete went with his Wraithguard and Lords again but I got first turn. 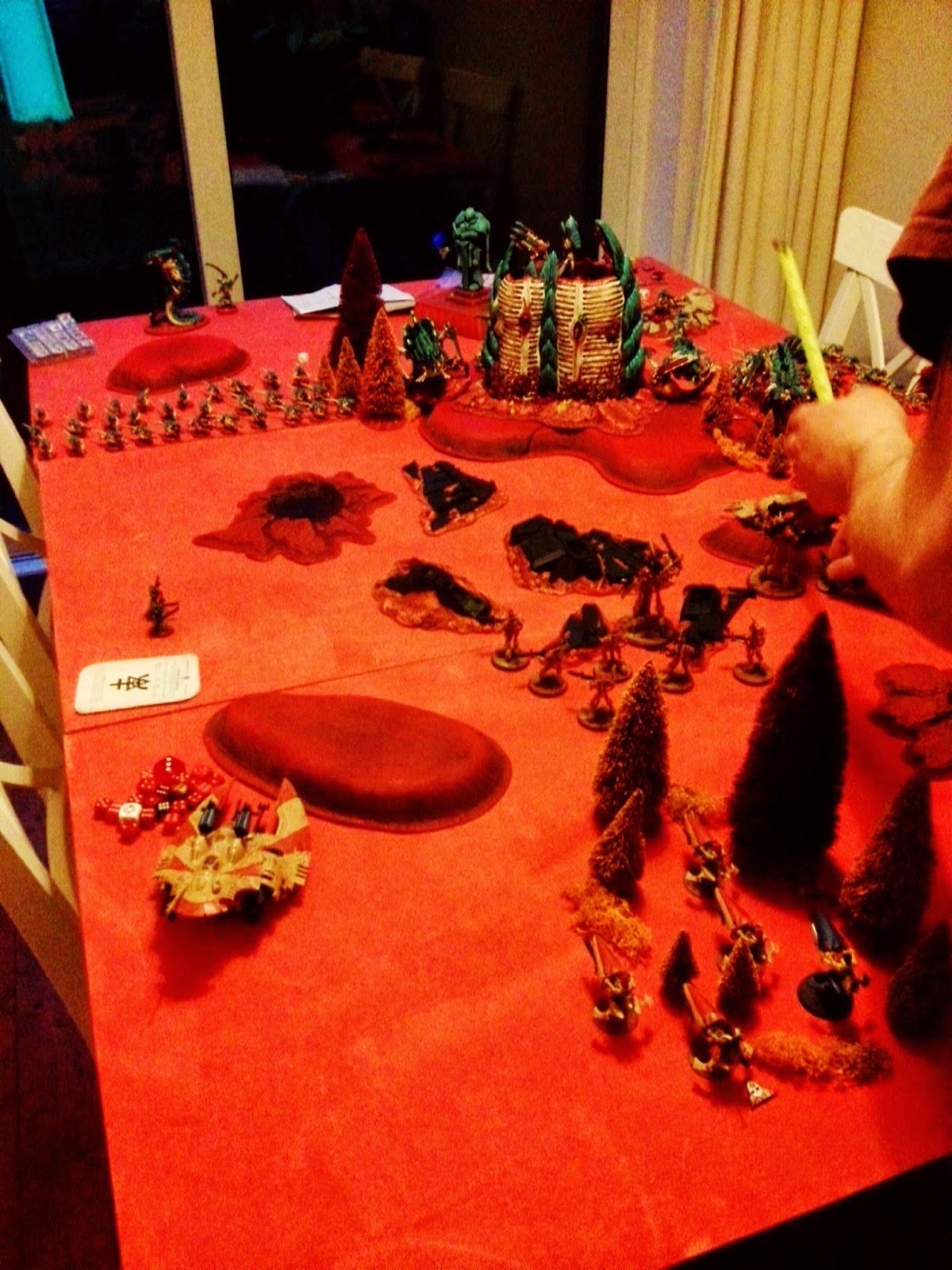 And having infiltrated  a wave serpent and unit of Scorpions forward Pete paid the price with my Hive Guard destroying it for First Blood. The Wraithguard also suffered a lot of wounds, Pete's dice rolling was particularly bad. My first turn was brutal and given last weeks overwhelming win I think this early surge was demoralising for the Eldar high command. 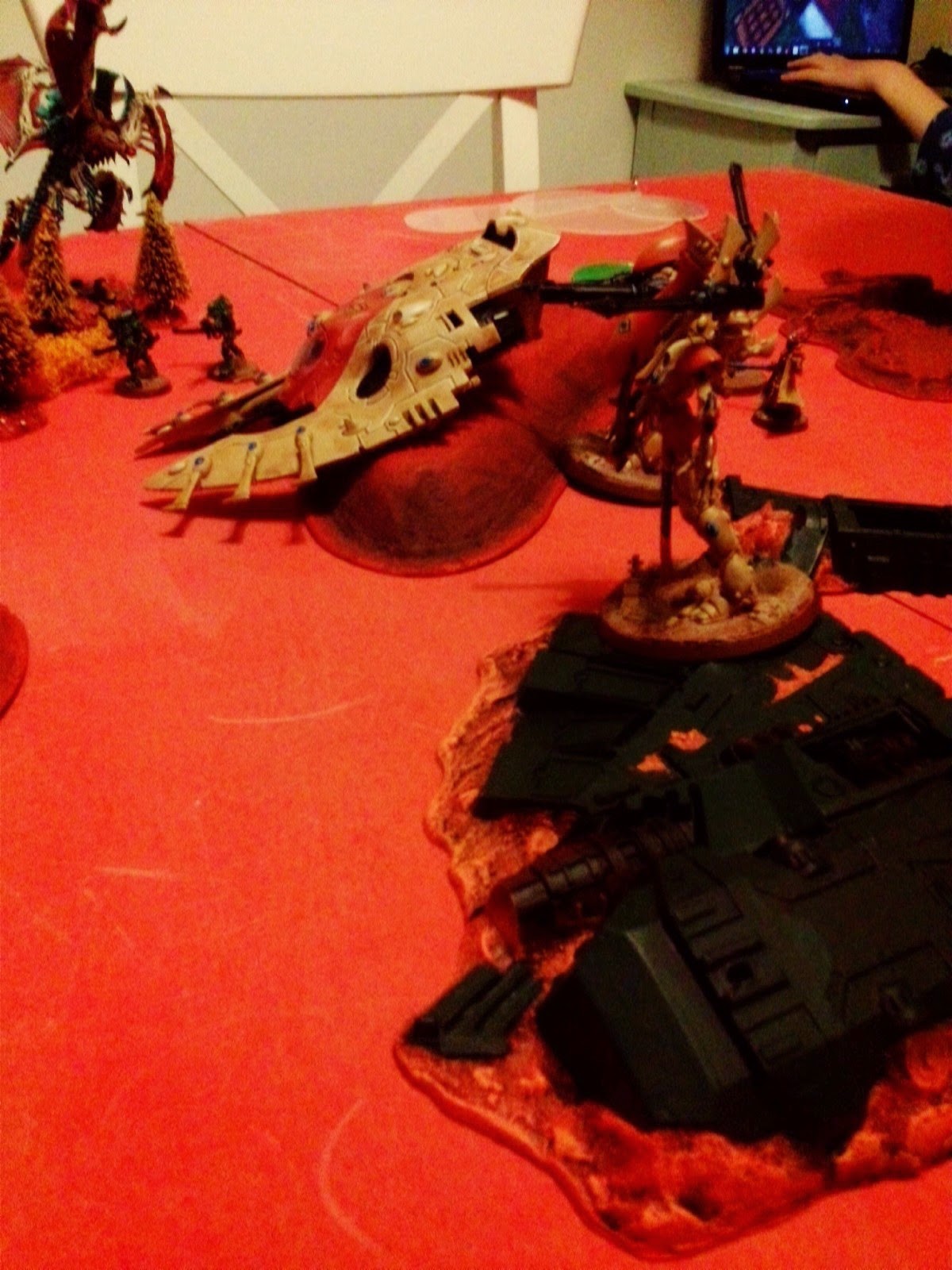 As time went by I did make some grave tactical errors, I continue to assault units far too powerful for my Tervigon to overcome. So as the game progressed Pete managed to close the gap quite considerably. One of the highlights was my last Tyranid Warrior getting an Overwatch on the venerated Wraithlord from our last game and taking it's last wound! 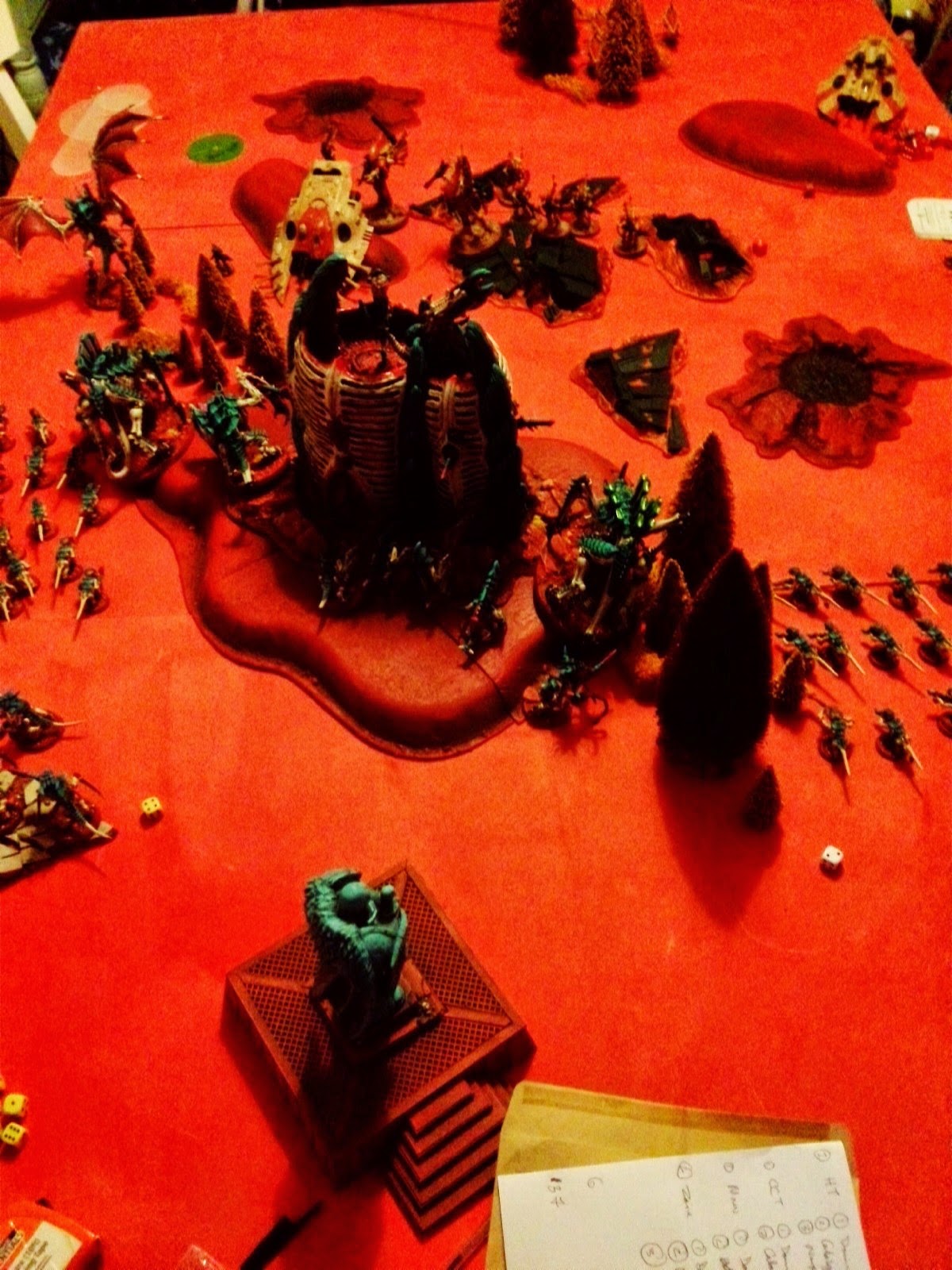 The Psychic phase was a whole lot of weird, Pete was initially very impressed before his turn when he was unable to cast any of his powers. That's one thing about 'nids, our powers are hella cheap to cast. It's a nice mechanic on the whole. It allows a bit more interaction between players during the game but it does interrupt the flow of things, slows it down a bit. We took to sitting down during this phase, it was more like a card game. When you consider I used to cast certain Psychic powers with three dice, two yellow for the Ld check and a red die for any D3 modifiers - Iron Arm and Warp Speed, now Paroxysm [why didn't that get a straight -3 to BS and WS like the Biomancy powers?] to try and save just a little bit of time. So I'm a bit concerned about the amount of time spent doing powers, but it's early days. Overall the game plays much the same but I was slightly more impressed by the charge through cover situation with -2" to your 2D6 but my Termagants have Move Through Cover so it's no effect [except for the Initiative modifier] and they get Counter Attack for free when next to their Tervigon. So I'm seeing some benefits for my nids, which is nice. 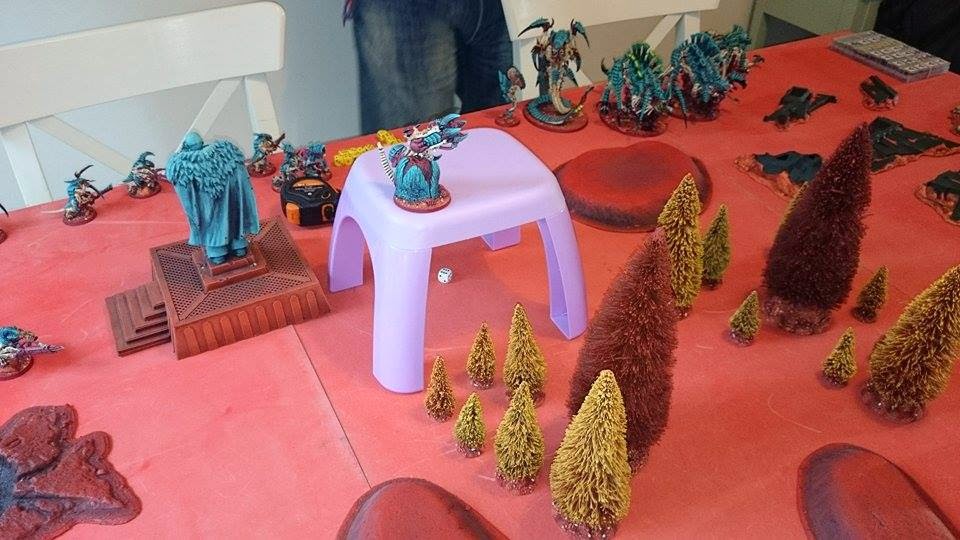 A week later and we're at it again. This time PeteB decided to overcome the shortcomings of his Wraithguard with the help of some Evil Space Pixies and their faithful beasts. This time we did the 'Emperor's Relic' mission from Blog Wars - 3 objectives with one in the middle of the board worth 10pts, and one each, your own worth 5pts to yourself and your opponents worth 15pts, an interesting dynamic. As you can see I forgot my Bastion so PeteB's daughter's toy stool proxied as my Fortification. 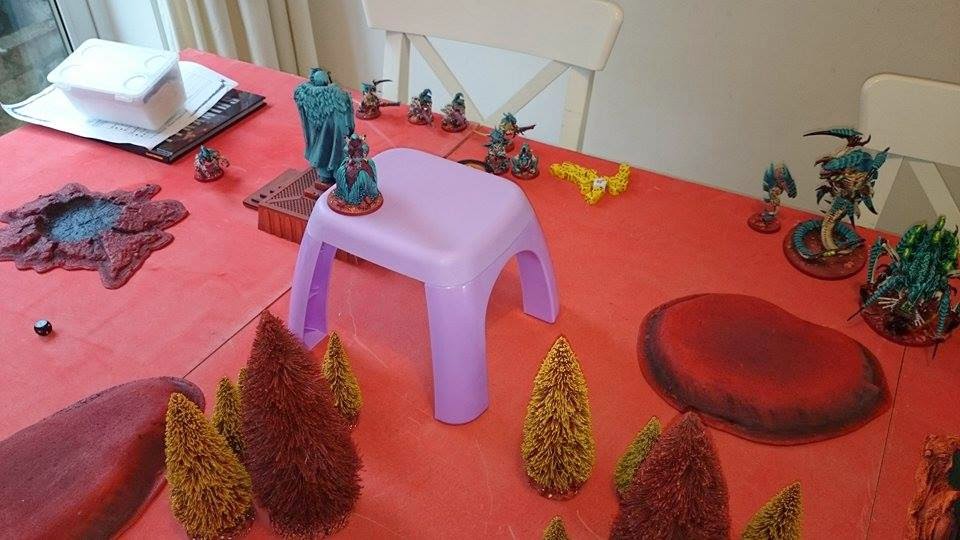 The beasts were the advance guard but I got first turn again so I was hoping to thin their numbers. 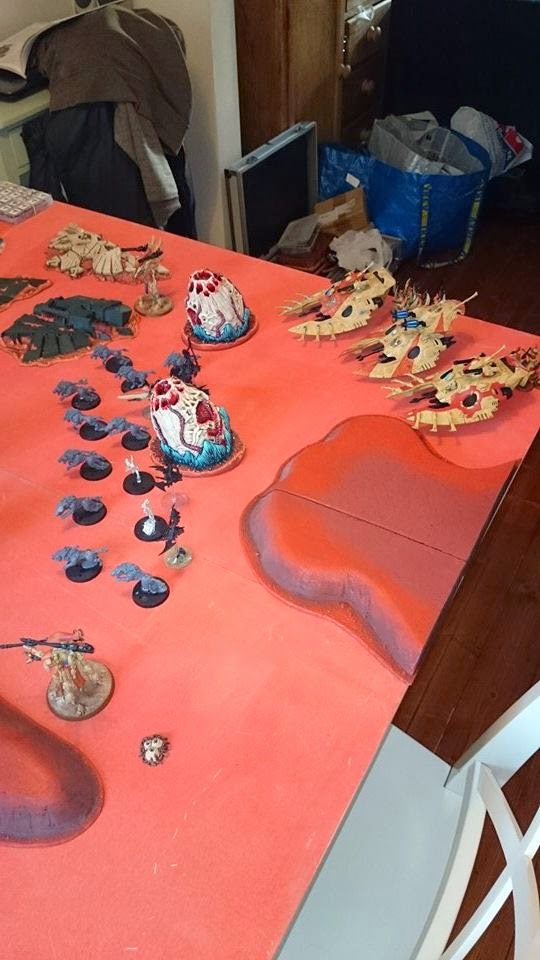 One advantage of the 'stool of doom' was I could put my models inside the building. The Hive Guard were reasonably effective and although I didn't manage to get First Blood I took out quite a few beasts and wounded a Wraithlord.

Unfortunately the beasts are super fast and managed to roll over my Carnifex. Additionally the Bastion got hit by a Lance weapon and blew up. The Zoanthrope manning the Quad gun took two wounds and I got snake eyes for his saving throw. The Hive Guard suffered 3 unsaved wounds between the three of them, killing one and wounding another in the explosion. With Baron Sathonyx and a Farseer/Warlock on a Jetbike all sorts of wound allocation shenanigans went on to protect the beasts. It was really difficult to kill any of them. I made a gamble and sent Deathleaper in, challenged, and ended up facing a Beast Master. Challenges seem to have changed in 7th. I thought you nominated who you wanted and if they sent someone else they didn't get to take part. Now the assaultee chooses who accepts if there are more than one so the Beastmaster [the weakest of the three opponents] was torn apart by 5 wounds, two of which were rending. The Great Maw spewed its poisoned Miasma over everything and both my Biovores and Barbed Strangler deviated wildly to less effect, it seems I was borrowing Pete's luck from last week. 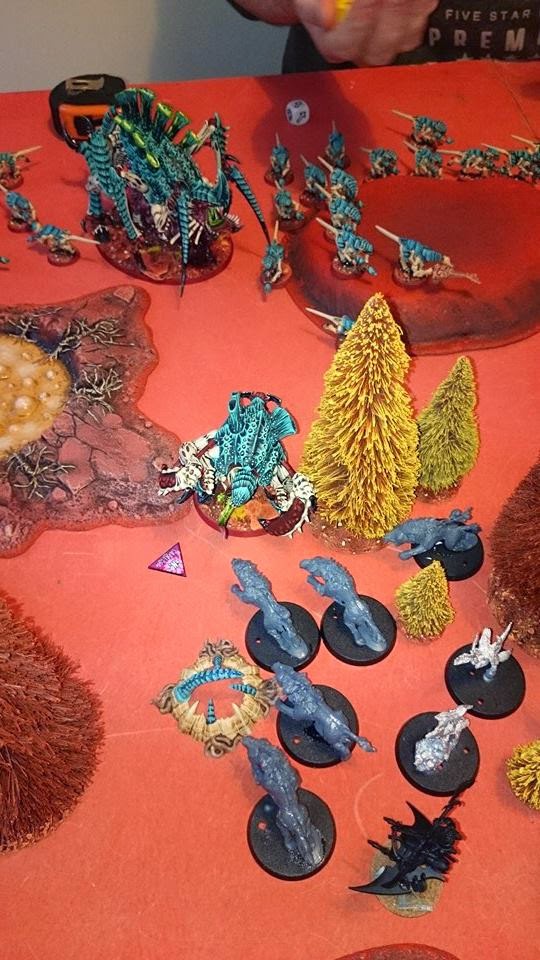 At this stage there was still a unit of Jetbikes and Vipers to come on and the Dire Avengers hadn't even got out of their Wave Serpents. My Mawloc had failed to turn up on turn two when Deathleaper could have got him to swallow a bunch of doggies, instead he eventually got a unit of Swooping Hawks, with the sole survivor flitting off. My Tervigons fell, one was Doomed so was taken out by the Vipers in one turn, the Mawloc would follow in much the same fashion. The Great Maw managed to survive a couple of turns against the Farseer, Deathleaper was unable to get past Sathonyx's save. Eventually the Farseer's Instant Death weapon brought them both down.

We had to call it at midnight, there was no way I could hold my own, most of my force had been spent on the Beasts and their buff units.  This was a difficult game, there's something that happens when absolutely nothing goes right. It doesn't matter how philosophical you are about it it's tough to overcome. Last week it was Pete who had to face this feeling, this week it was me. The Beasts and their buff units, offering them Fearless and having 4+ invulnerable saves, Sathonyx with a 2+ invul save until he takes a wound, it's a tough nut to crack. I even put 7 wounds on a Wave Serpent, thanks to my Flyrant, it jinked all of them!

I think we're both looking forward to smaller forces though, 1500pt armies. I'm getting bored fishing out 60 Termagants a game, can't wait to have something a little more compact.