The Death of Project X - Armies on Parade 2014 cancelled?

I've been dropping hints about projects X and Y for months now. Project Y turned out to be the landing pad section of my Skyshield to attach to the Capillary Towers I'd been building, but Project X has not been revealed, until now. 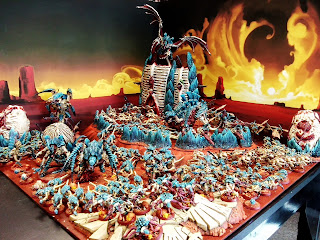 Sadly, I was the only entrant in my local GWs competition, so I walked away with the gold medal. It's since been used as a beat stick to my gaming buddies to enter the competition this year. Every time I play one of them I whip out the old medallion to wind them up, in the hope they will enter and then I'll be able stop showing it off. The only problem is, the fact I've seen no mention of Armies on Parade 2014 at all this year. This time in 2013 I'd already been approached by my GW manager saying he'd got three people who were going to commit to it [and ultimately didn't]. When I popped in recently and mentioned this years competition he was of the opinion it had been cancelled altogether. 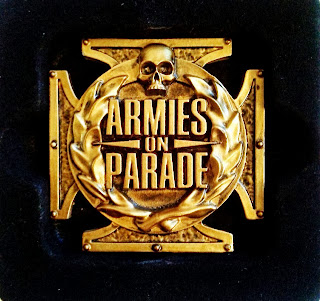 With this rumour in hand I decided to contact GW directly for some confirmation and this is the information I received:


Hey Dave - Many thanks for your email and we do apologise for the long delay in responding to you. Since the new web store launched we have received a large increase in both calls and emails.

We do not currently have any knowledge of if or when Armies on Parade will be happening, however the first place to find out about such releases would be on the website’s daily blog or in White Dwarf.

We hope this helps.

James
So Armies on Parade 2014 could be cancelled, or it may still be on. What is pretty much guaranteed is that Project X is dead. I'm not prepared to commit to creating a new board with just three months to go. That's not to say I couldn't do it in that time, in fact I'd probably set aside that amount of time to complete it anyway, but a little more advanced warning would help me. Additionally we may be looking to have some building work done on our house and trying to fit in a large scale terrain project won't really fit into that scenario, or go down well with my better half. Should AoP happen this year I will most likely reuse my existing board but there will obviously be new additions to the army itself, that will have to suffice. On the one hand I am disappointed, I had a really great idea for what I was going to do, maybe they'll sort it out next year and I can fulfill it's potential. On the other hand those energies can now be focussed on my current painting challenges - mainly Dark Angels with a side order of Tyranid procrastination.

One point of note is that AoP may well be still alive in other countries, I'm not sure why. But I have seen posts of people doing things overseas so maybe it's not all dead, just take what you will from the email I received. All I know is that this time last year the competition had been announced, whether it's dependent on Games Day/Golden Demon, which itself may be debatable after it was downsized in 2013, who knows. Like I say though, time is running out to run a competition that requires such effort as an AoP board, although I'm pretty sure those Golden Demon guys probably start preparing as soon as the last competition is won! Until I see an announcement I don't believe it's going to happen.