It was late on in the incursion of Ferron Proxima that Hive Fleet Gorgon introduced a new bio-menace.The tactics so far had usually followed a path of bio-engineering a new bioform that would threaten Ferron's defences and that way the Hive Mind could ascertain whether it was worth committing further resources to that bioform. However in this instance three new bioforms were created and deployed under the watchful gaze of the tried and tested Zoanthope genus. 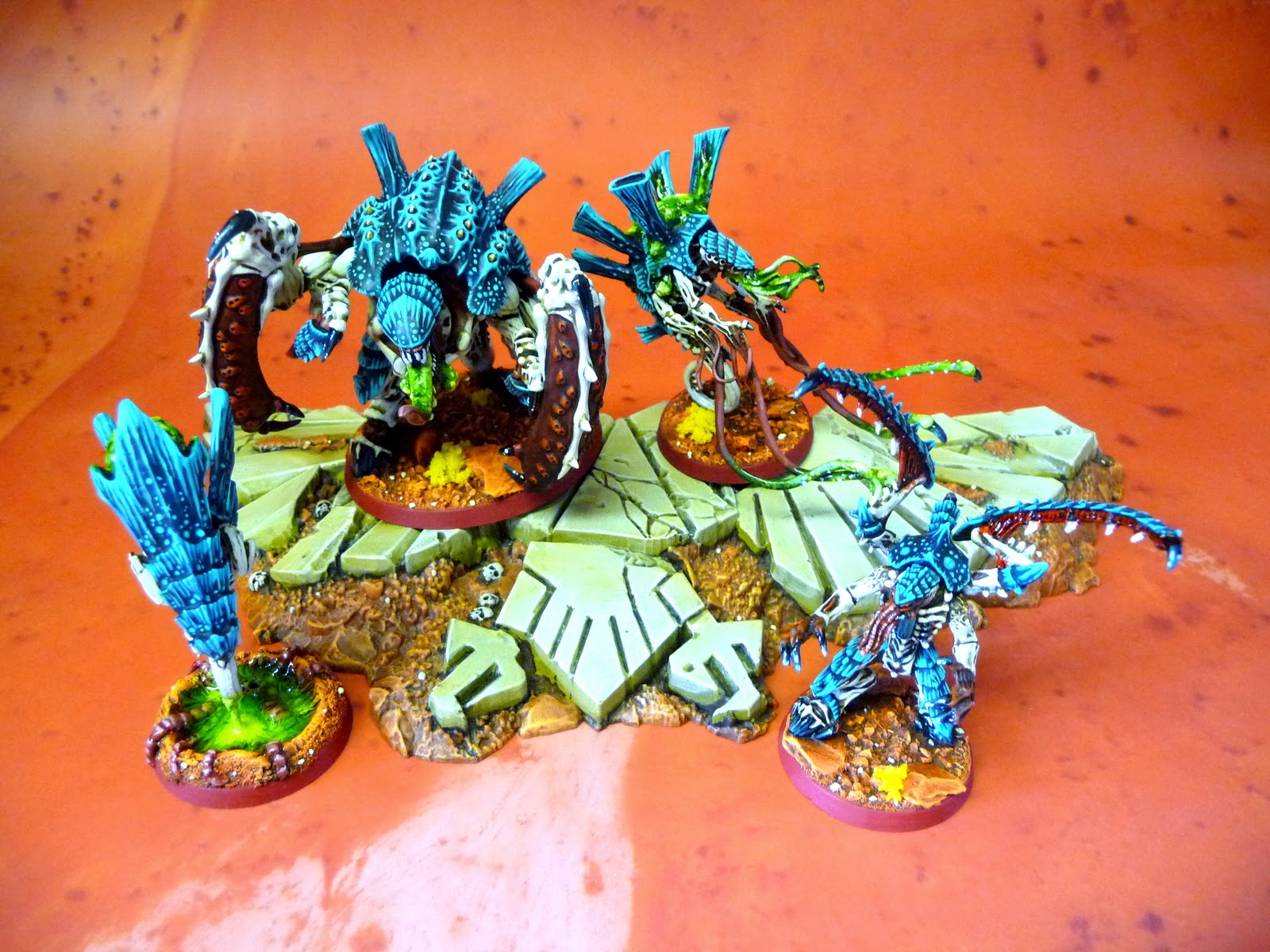 Having the enhanced brain capacity of the Zoanthrope alongside these three new test subjects would allow the Hive to monitor their progress, strengths and weaknesses in real time and at an accelarated pace compared to it's previous prototyping tests. As these four abominations were often seen within close proximity to each other the valiant defenders of Ferron proxima took to calling them the 'Four Horsemen of the Ferron Apocalypse' in referrence to the ancient Terran fables. At first this naming practice was overlooked. up until the the very words 'Four Horsemen' began to bring about the unmanning of the most staunch auxillia in the PDF. Once this fear started to spread members of th Astra Militarum Commissariat were deployed to submit fatal alternatives to the grip of fear. In truth though the names were continued to be spoken, just in more hushed tones, while the light of terror in their eyes shone on regardless. 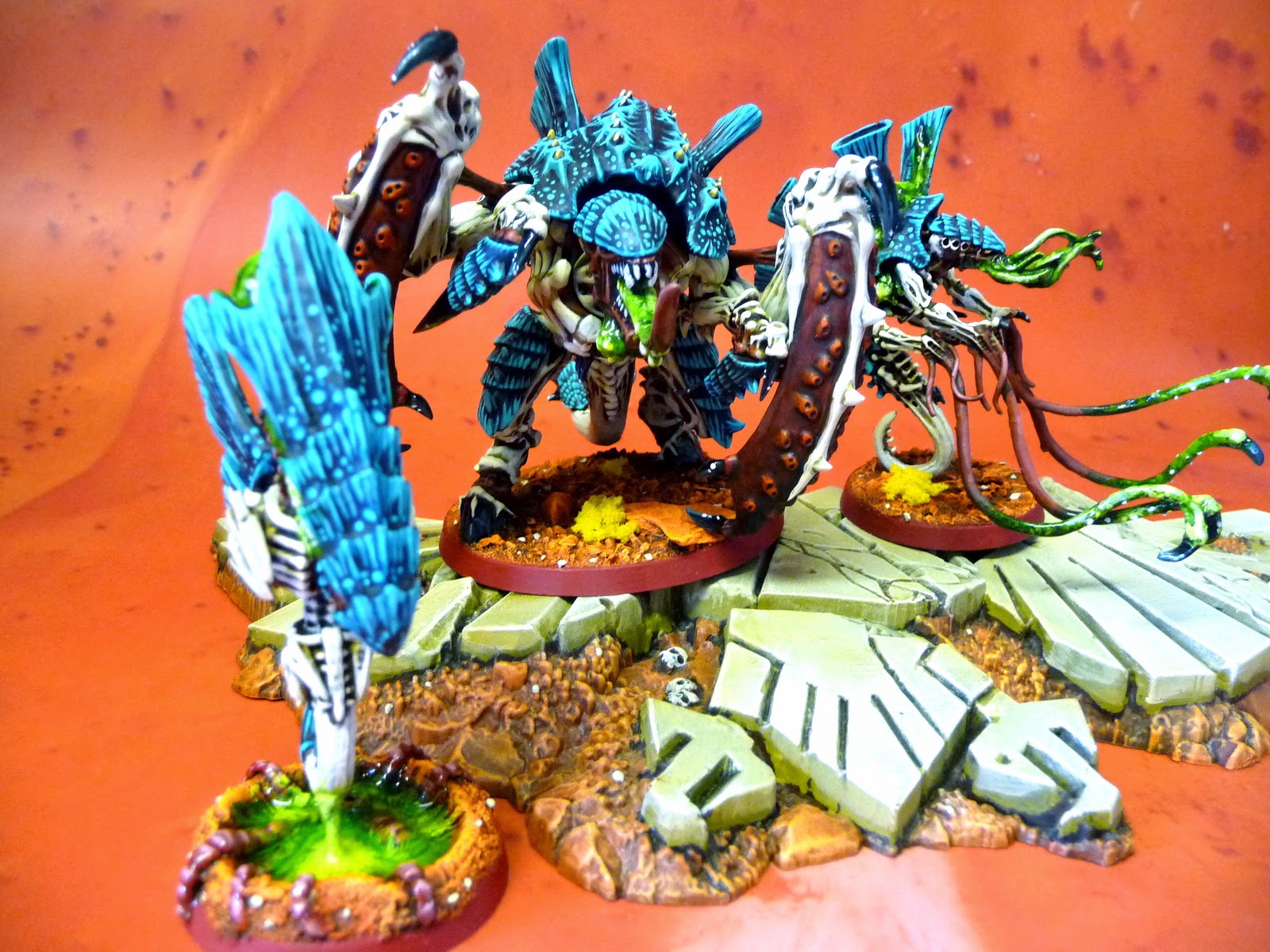 The Hive Mind's conduit was nicknamed Famine, in part because it was initially thought to be a reincarnation of the 'Doom of Ferron Proxima'. However, this was a case of mistaken identity and although it did not have the life sucking powers of that nightmare creature it did posses many other skills of the emperian. Although it was not initially considered the most threatening of it's twisted bretheren it's Psychic abilities received an unexpected boost when the 7 planets within the Ferron system aligned causing an unexpected change the manifestation of all Psychic powers within the system. Sanctioned Psykers of the Imperium have begun referring to this change as the 'Phase'. It's too early to tell what impact it will have on Hive Fleet's control of it's witch powers but so far there have been great improvements alongside drastic failures. 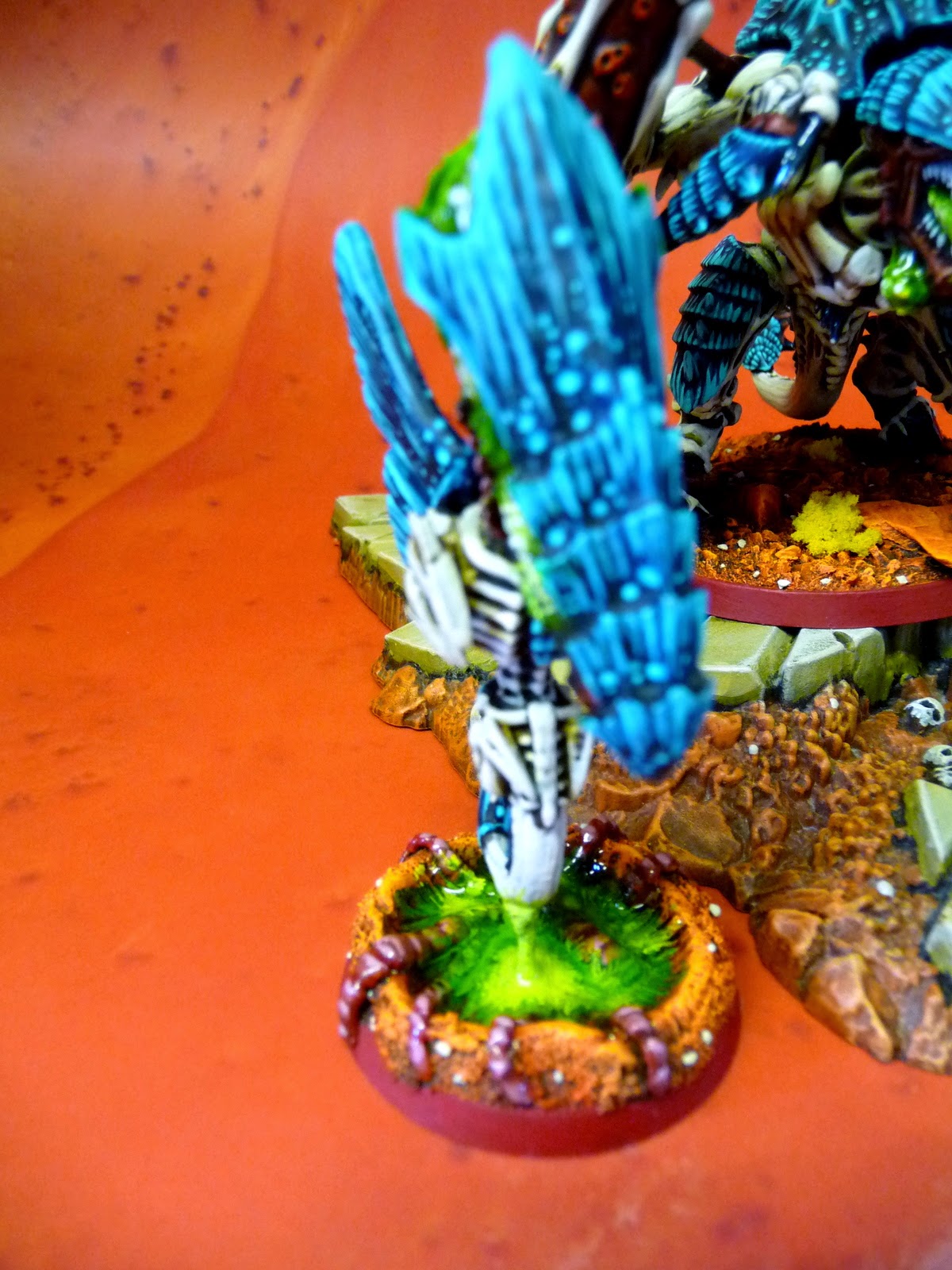 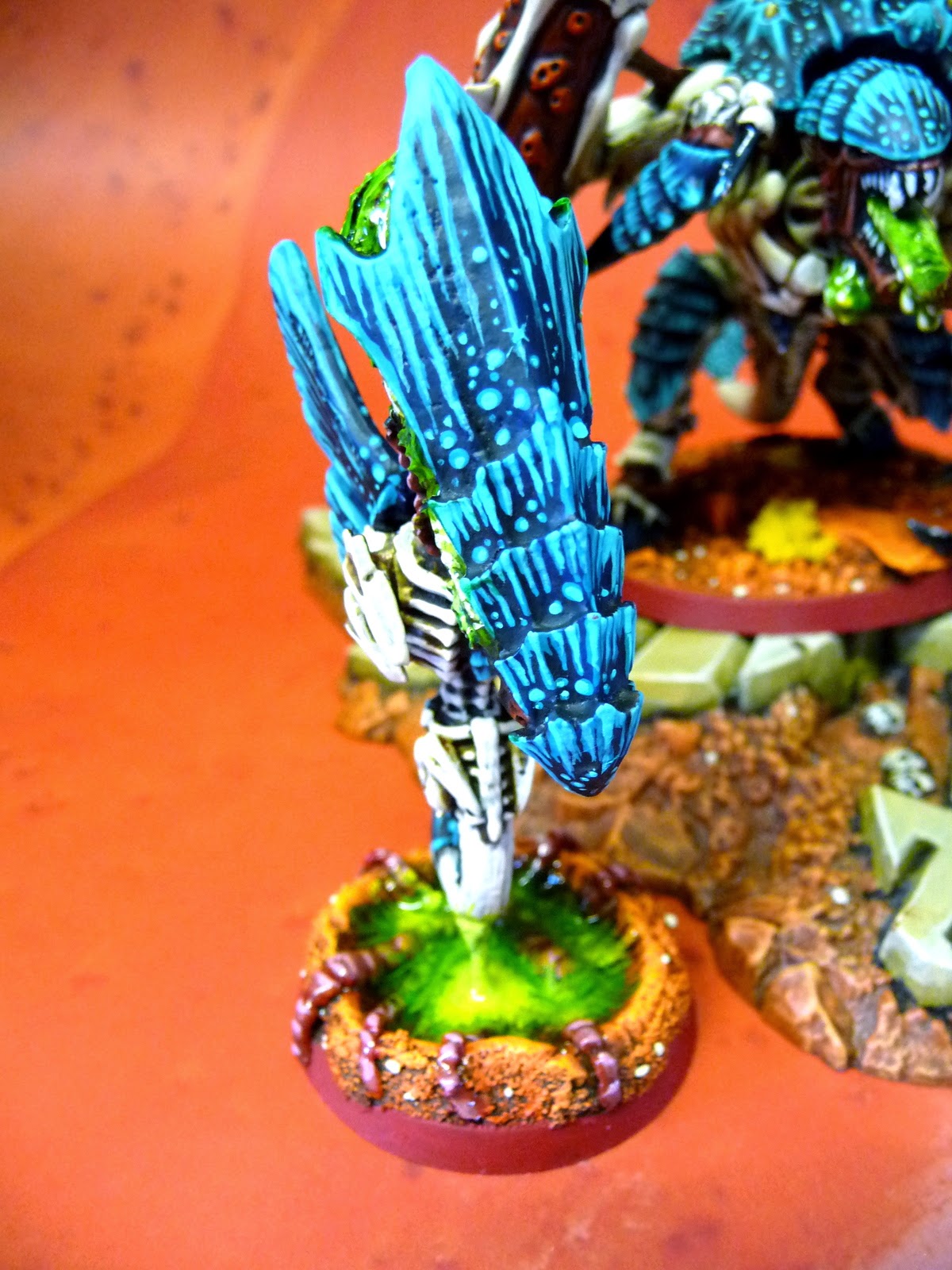 Despite it's fragile outer structure Famine controls all four of the Horsemen as an extention of the Hive Mind, it's recommended by the Bio-magi studying this new danger that despite it's lower threat level than it's brothers it should be considered target priority Alpha, to sever the connection between the other Horsemen and the Hive Mind. 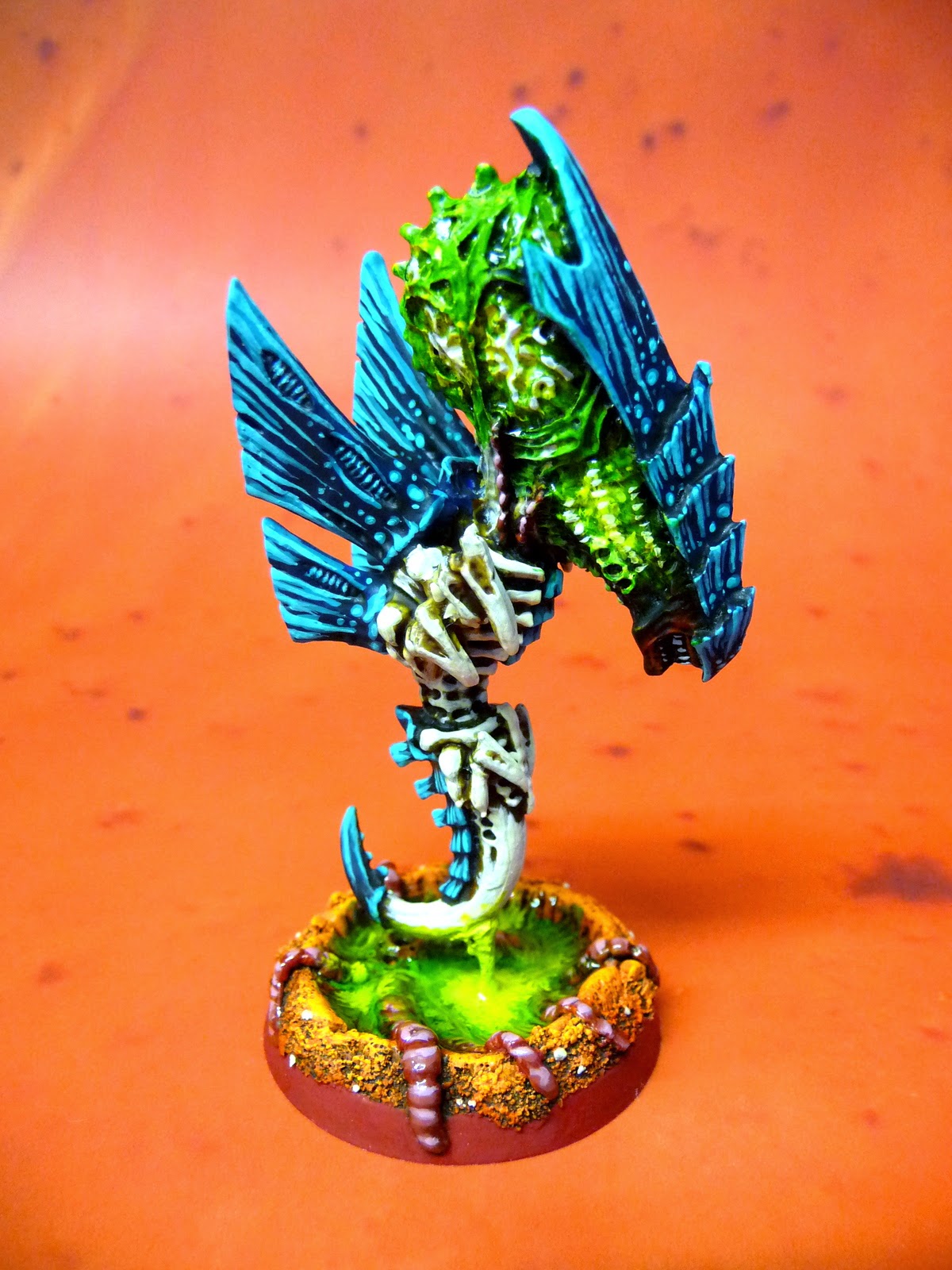 If appearance alone be the judge of danger then this creature from the Carnifex family would otherwise be considered target priority Alpha. The creature itself is a Behemoth, a nigh unstoppable bio-tank armed with some of the most potent Brainleech Devourers the Xenos can engineer. 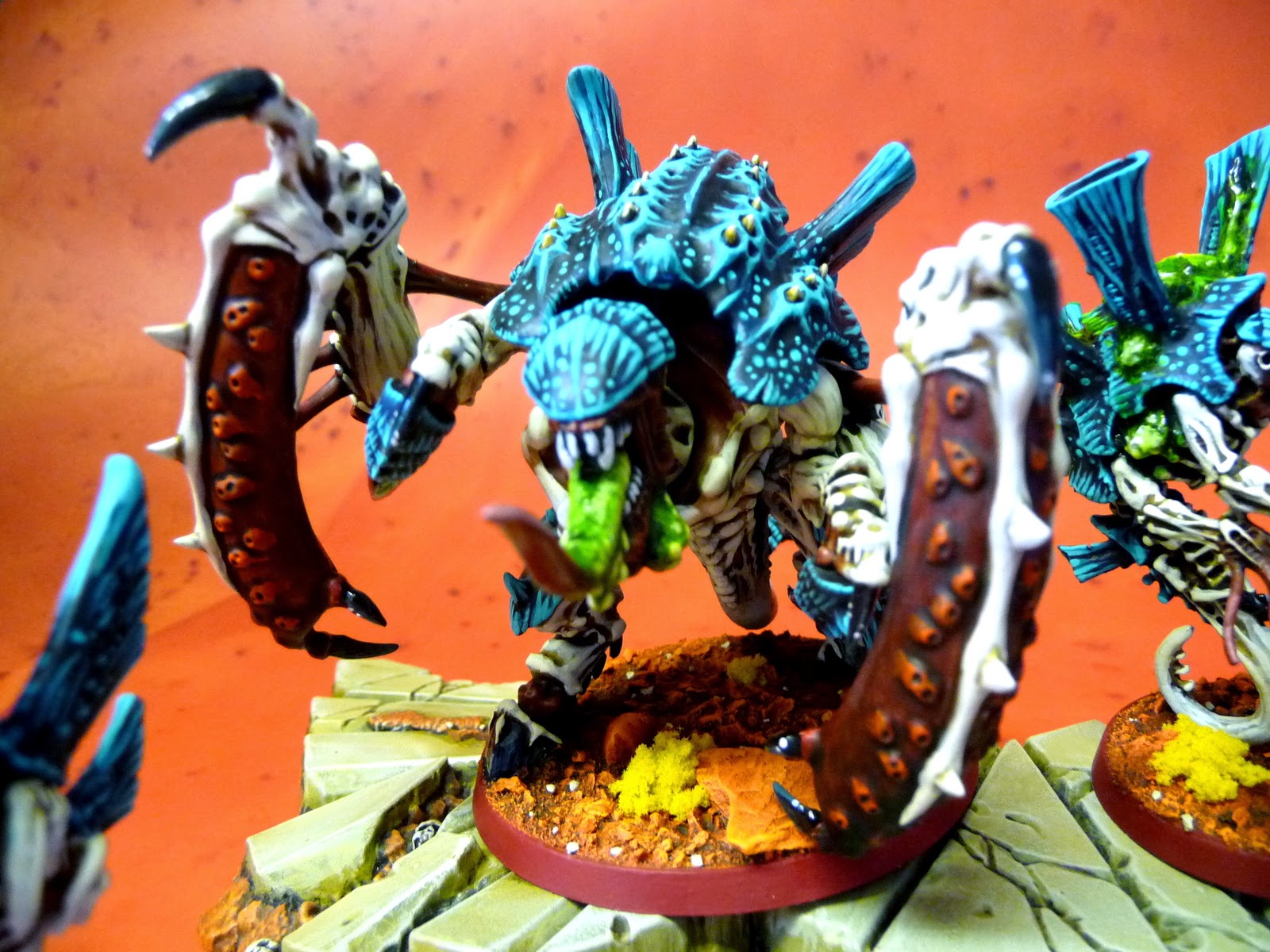 Although not as manouverable as the winged Hive Tyrant that also can be found armed with such weaponry this creature, dubbed 'War' due to it uncompromising battlefield role, advances under the protection of it's siblings. It uses the mental fortitude of Famine whilst being protected under the cloud of Pestilence...

...this foul, loathsome creature is still much a mystery to the bio-magi. It seems to contain and exhude some of the most virulent toxins and poisons ever encountered on Ferron Proxima. Gaining samples have proved extremely fatal. The creature is shrouded by a toxic mist that obscures most of it's biological functions and also manages to cover the advance of it's siblings and other creature from the Xeno's threat. 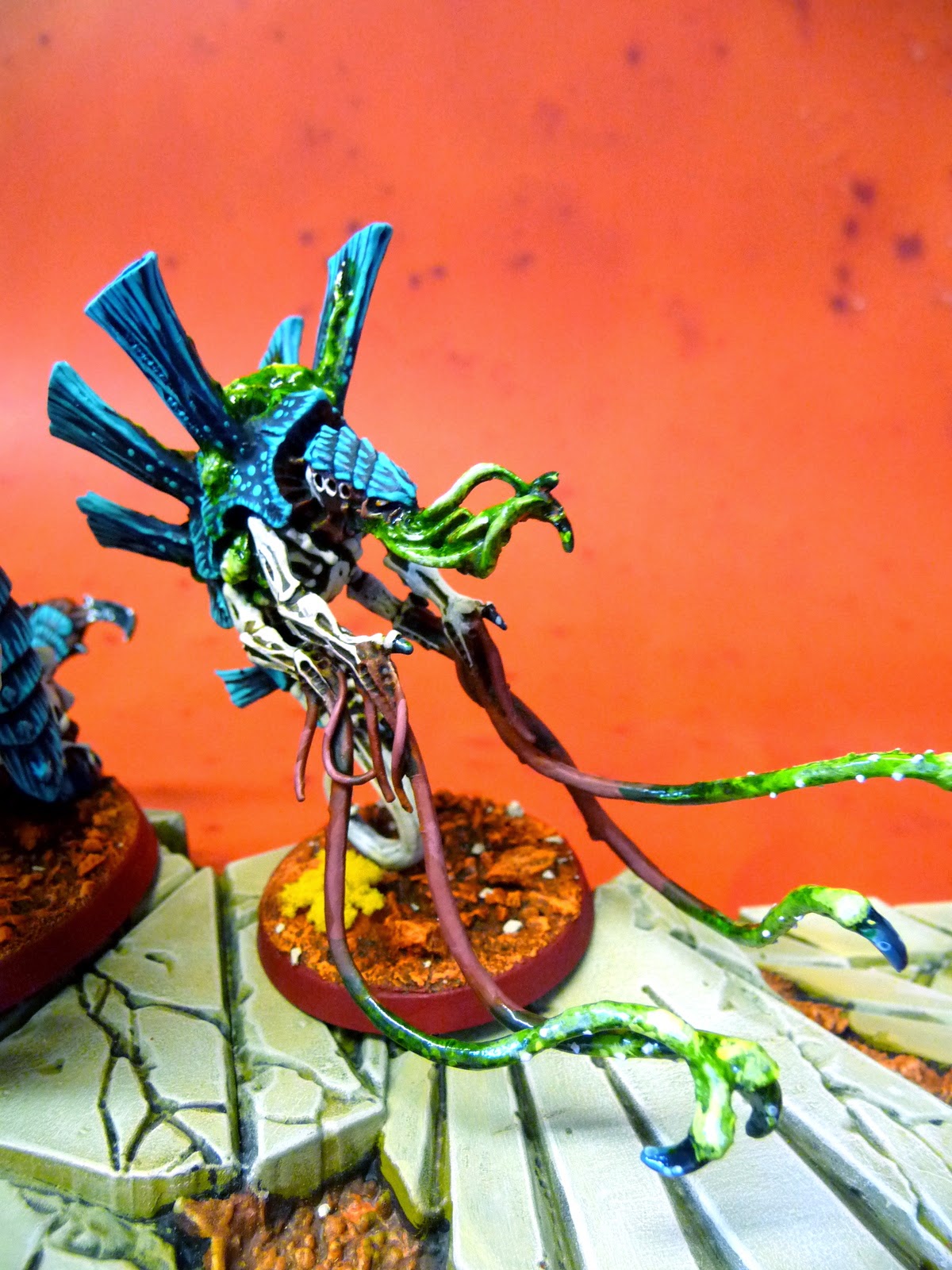 Due it's Toxic nature the nickname Pestilence was adopted. Despite its slender size and less fearsome appearance it is often this creature that will terrify more than the rest of the Horsemen. For what can a man do, even one blessed by the Emperor [insomuch as that man was conscripted into the PDF and there by default MUST be blessed] when behind those writhing tentacles and slime dripping maw once could die instantly just by being close to this abomination. 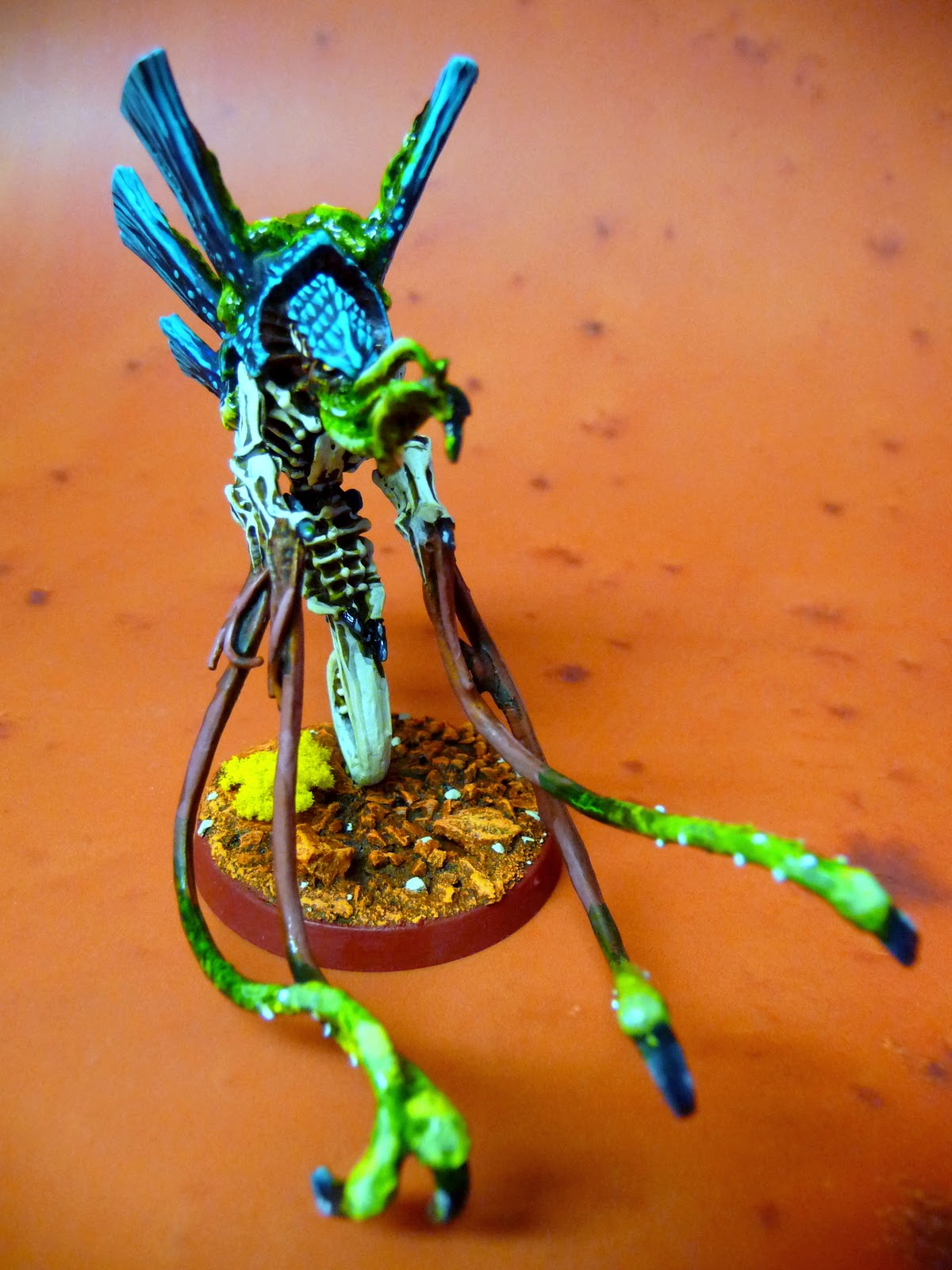 Yet for all Pestilence's fatal characteristics it is this Lictor that has earned the moniker - 'Death'. For it is death incarnate, an untimely end no one can foresee. Often striking from the shadows, having patiently stalked it's prey. With an adaptive camouflage that can help it blend into it's surroundings usually the first sign of it's presence is the mantis like talons that have suddenly appeared protruding from a Guardman's chest. 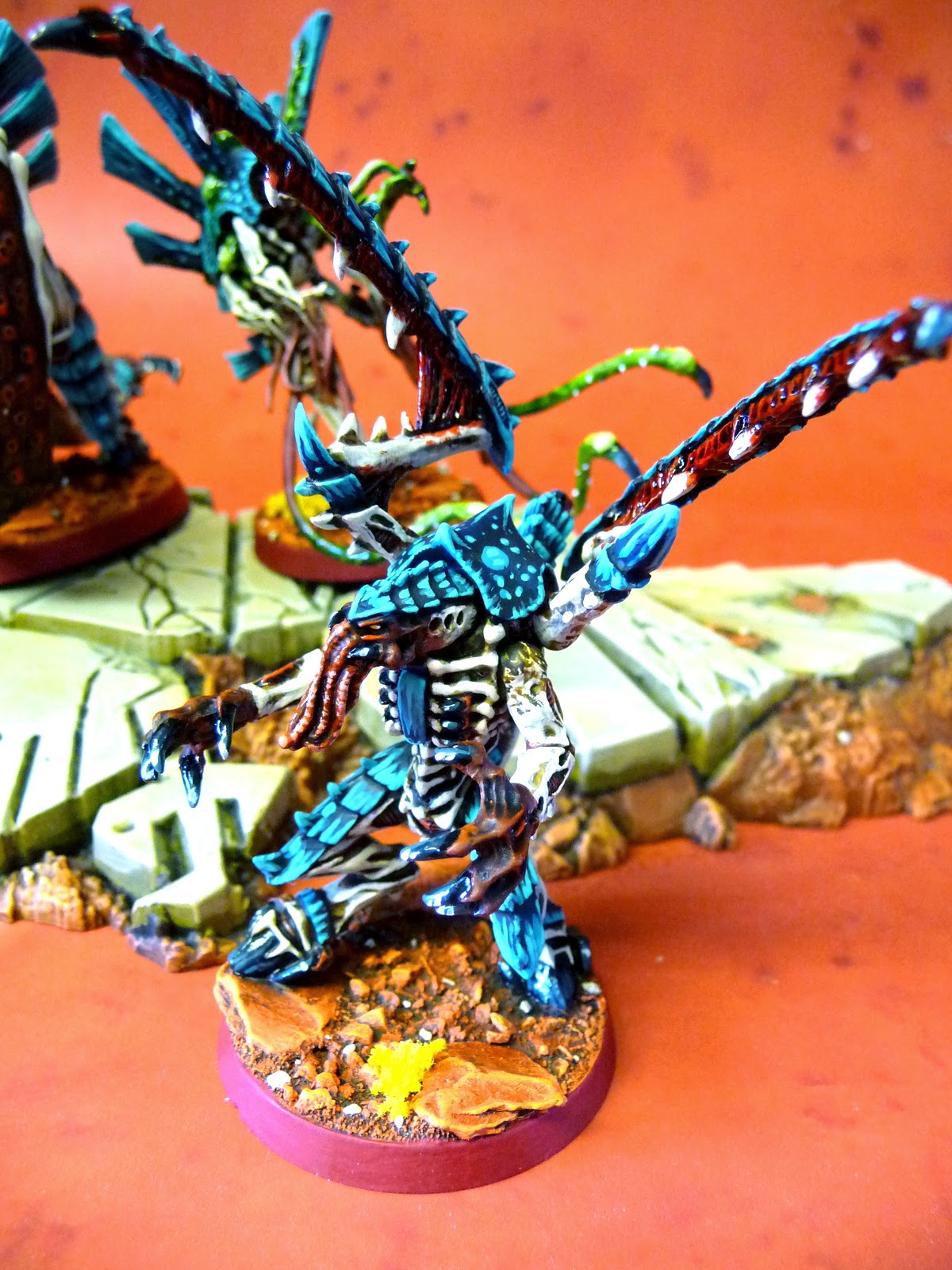 Identification of this member of the four horsemen has been the hardest  as it's given role of the fourrequires it to range further ahead than it's bretheren, even beyond the control of Famine and given this level of autonomy quite often the connection between the four has not been made. rest assured though that if you see one of these creatures the rest will surely follow but whether you see all four at once depends on if you survive the meeting or whether they choose to reveal themselves. 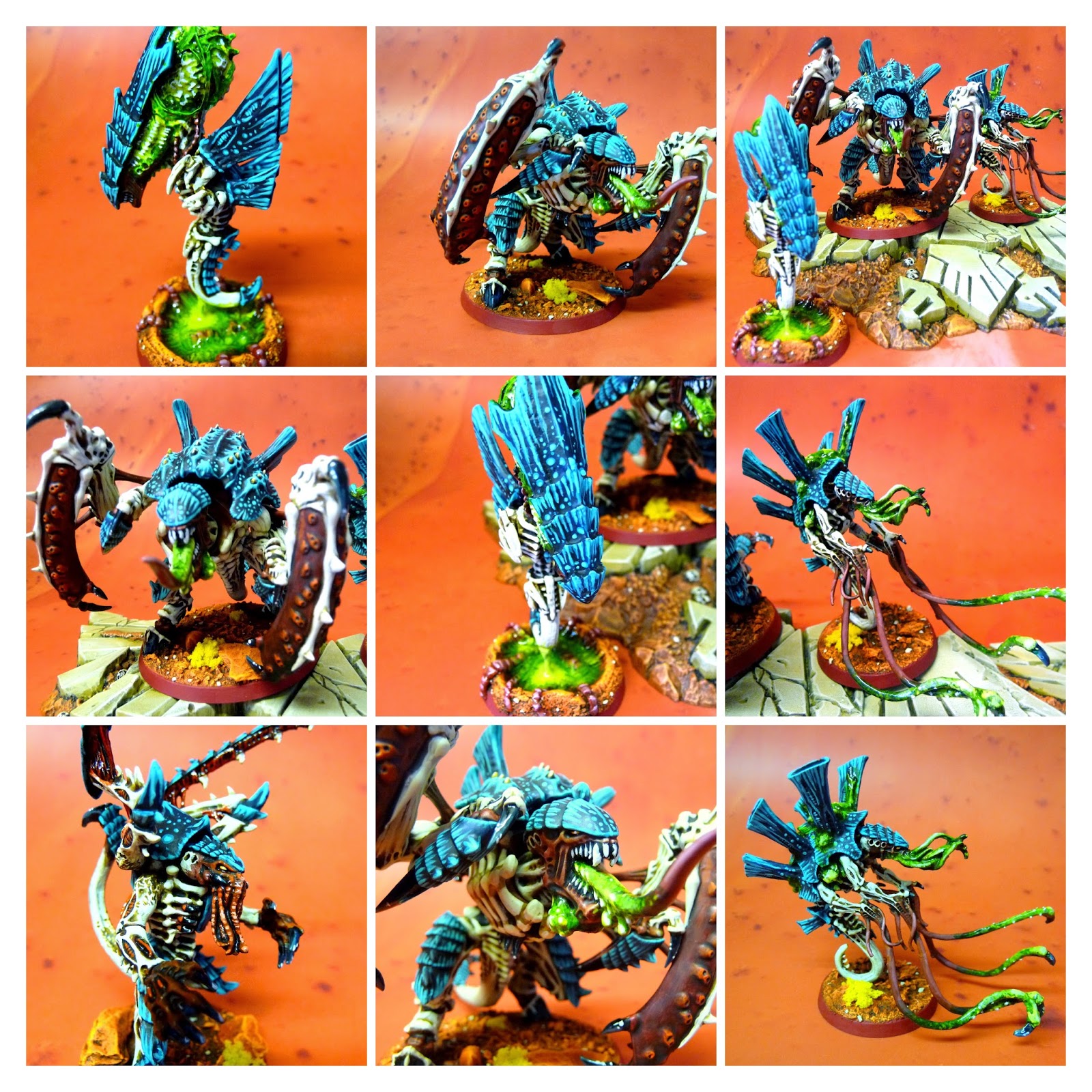 Be wary brave men and women of Ferron Proxima, these creatures are a very real threat. Should you identify any of them report the sighting to the nearest available defence cohort, where they will then detain you and send you on for thought cleansing by the Inquisition. To help the citizenry recognise these foul denizens of the alien filth, Magos Biologis Alder Garrick has prepared a set of handy cards, keep them on your person at all times. 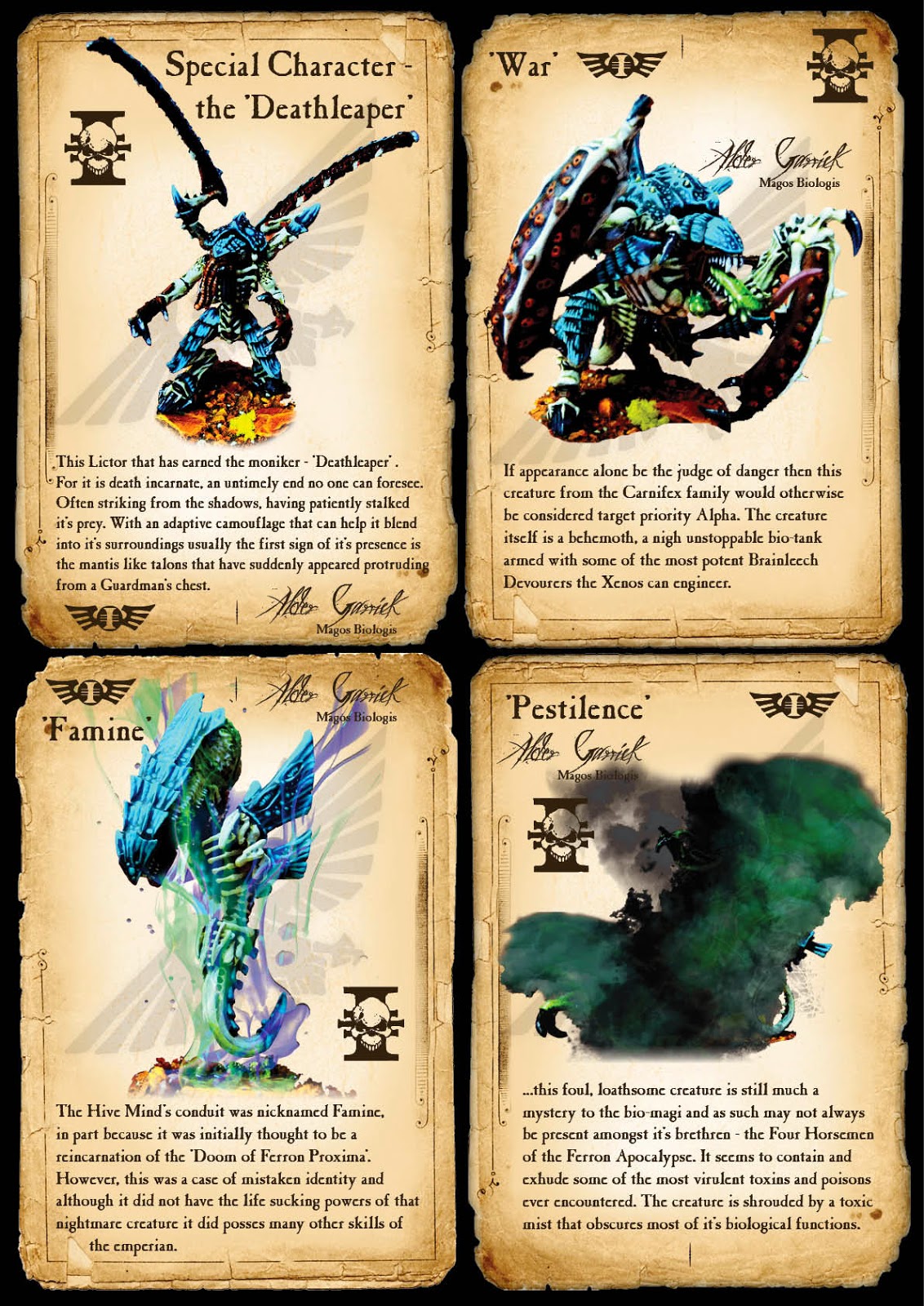