Tuesday nights all right for fighting

Just under a year ago I had an email from a guy from the Lost Boys Gaming Club who'd been inspired by my efforts to create his own Dark Angel Wound Markers he contacted me the other day asking if I wanted a match up against his Fallen with the nids because he's got a 1750pt tournamnet and he's never faced the great Devourer. How could I refuse? Not only do I get some practice with a list similar to my Blog Wars effort I get to see what Dark Angels can do.

Sadly I've not been to Lost Boys in quite a while, I usually get there later than everyone else and the night finishes at 10 so I'm hard pressed to complete a full game, not that that's a problem at Throne of Skulls, why is that? But that closing time also makes it problematic for packing up. When you factor in my priority in painting figures and the ability to satisfy my gaming needs with showdowns against PeteB and Ben and occassionally Liam it's been low on my priority list.

Anyway, I got to Ainsdale and Chris and I had a chat about our respective armies, his Land Raider is really cool and even has an LED inside to light up the transport area for his Deathwing. While we were talking though disaster struck and I managed to catch the Scourge of Oktavia with the pocket on my hoody and drag it off the table. As it hung precariously on the edge by it's base I stepped back horrified only to see it plunge to ground, it hadn't even been overwatched and still it was grounded! All the magnetize limbs ejected from their respective partners and the slate the tail mount was stuck to fractured just below the super-glue join, that's what slate does. Additionally one of the wing claws is snapped and one of his toe talons is bent/broken by about 3mm. All in all it could have been a lot worse, although I haven't done a full inspection of the damage yet. Suffice to say I think it crossed both our minds that coming out tonight was proving less than spectacular so far.


So we set up, Crusade I think, Hammer and Anvil, 2 onjectives each. Chris took all these pictures [many thanks] It's not a full battle report, I'm trying to be brief. Chris had a couple of Tactical squads, a Deathwing Squad and Deathwing Knights, Ravenwing Squad and Ravening Knights, Attack Bike, Land Raider Redeemer and an Autocannon Mortis Dreadnought and a Librarian running the show. My two objectives are behind my Bastion and on the first floor in the ruins. Chris positioned his in the second floor of a ruin with a Tactical squad just put of shot on the left and on that ledge of a ruin in the orange area terrain. Night fighting was in effect and Chris went first, he moved everything up and managed to get 4 wounds on the CC Tervigon thanks to some pretty apalling saving throws from myself. 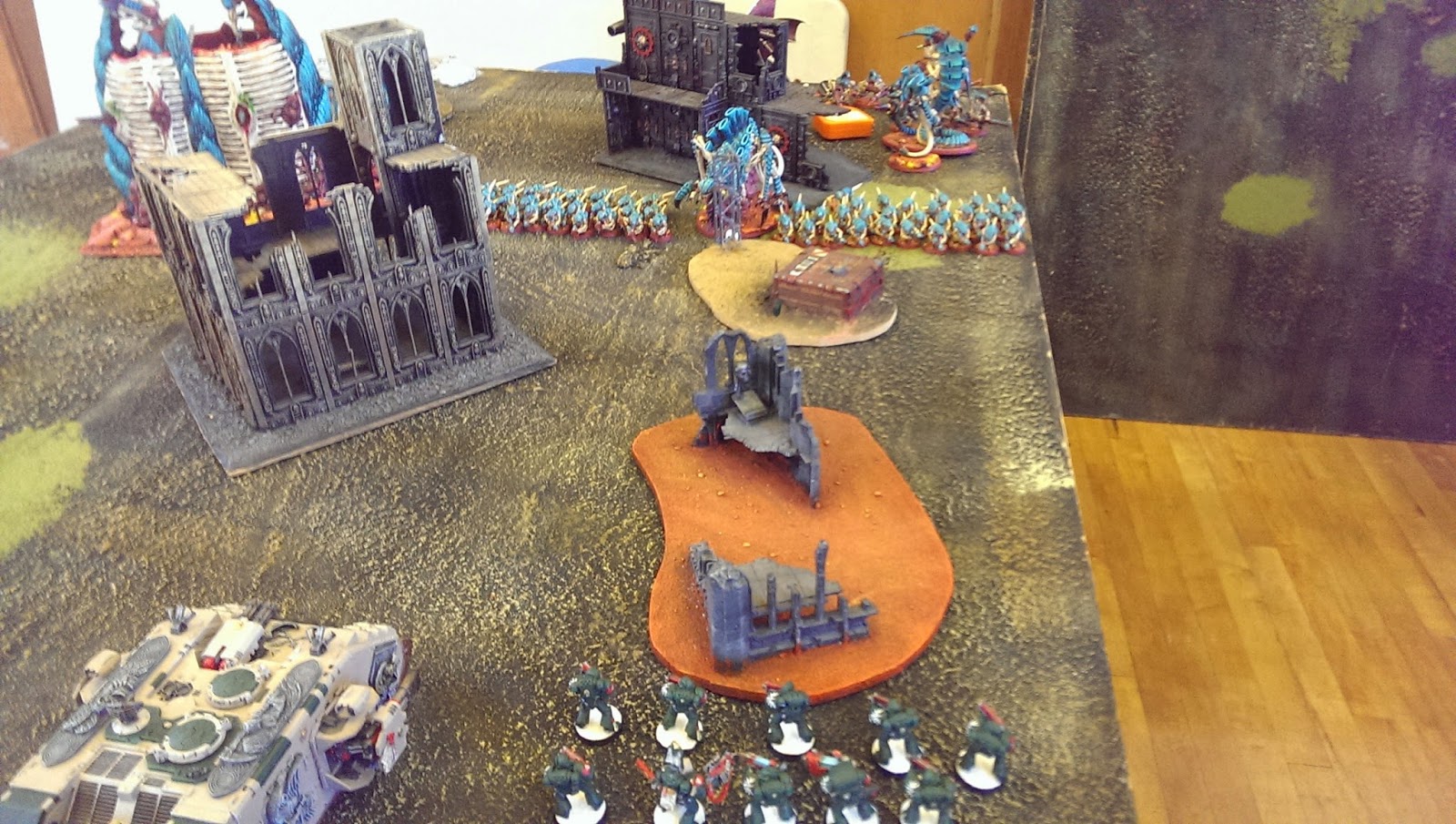 Now I had 60 Termagants, minus 11 killed by a Plasma cannon plus 13 spawned [while the Great Maw spawned out on 7] surrounding a Tervigon with 2 wounds left! The only choice was to go for the Land Raider, death or glory, but it had the Crushing Claws that could open it. Only it failed it's charge roll of 5"! Other Termagants headed for the Deathwing that telported next to the Bastion, they also failed their 5" charge range. I glanced the Dreadnought and may have pinged a Ravenwing with the Biovores/Hive Guard/Quad Gun, but it was the Twin Flyrants that did the damage, taking out the entire tactical squad in the orange area terrain, with a little help from the 30 Termagants. They would eventually swoop behind the Land Raider and put 20 Devourer shots on it's back door only to fail to glance it even once!

This is somewhere around turn 3 I think. Chris managed to get the Ravewing Knights on, he had some pretty disastrous Plasma shooting, killing one or two Marines throughout the game. When the attack bike arrived next to my Bastion I suddenly realise the Zoanthrope, Hive Guard and Bastion and Quad Gun was likely to go up in vaporized chitin. Interceptor fire from the Quad Gun put a wound on the attack bike but not enough to stop it firing but Chris rolled badly, not even getting a glance on the Fortification! His Deathwing tried to bash it to pieces but only succeeded in wounding a Hive Guard inside thanks to glancing blows. The wounded CC Tervigon succumbed to Assault Cannon rends, taking some Termagants with it but not enough to concern me.

The Great Maw and Termagants managed to take down the Deathwing after two rounds of combat.

Then they consoldiated back round the bastion with the Hive Guard and Great Maw assaulting the Ravenwing, who'd lost the attack bike and another rider to the twin Biovores! A Hive Guard died to overwatch but I think the Ravewning came to a sticky end. They tried Krak grenades on the Great Maw, I think it had only 2 wounds left and out of 4 hits got three 1's and a 2 for wound rolls! He later had another set saving throws that resulted in three 1's. The Dark Angels had 'fallen' from grace in the yes of the Emperor. 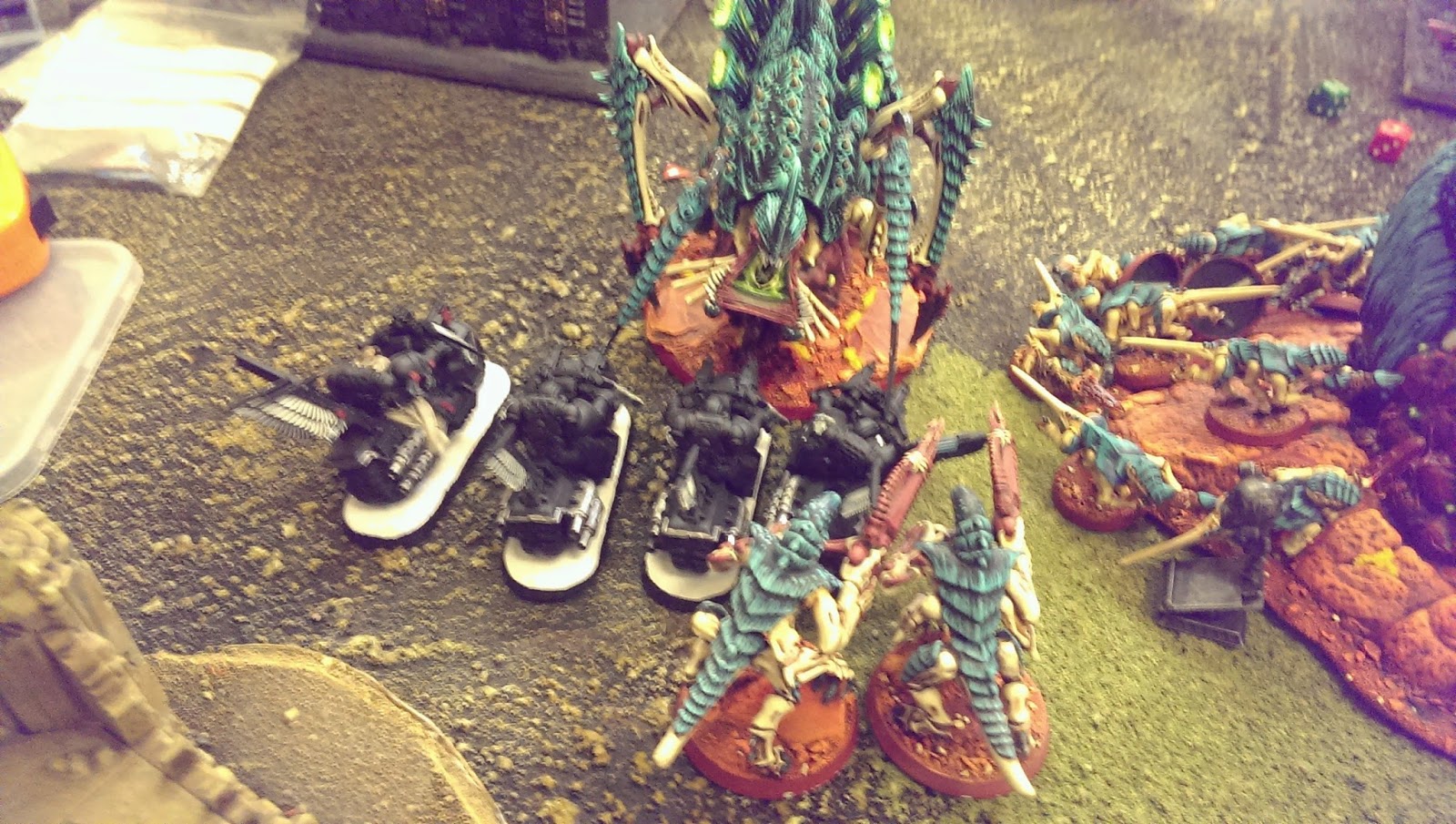 One Tyrant glanced the back of the Land Raider and then Smashed it, getting two pens, one of which, thanks to AP 2 blew it apart killing more Termagants in the explosion than the Flamestorms had during the entire game. I guess Promethium is very flammable! The other Flyrant went for the Deathwing Knights, and together with the Termagants and Warriors who popped out of cover managed to riddle them with weight of fire, killing them or leaving just two left. The Dreadnought also fell and the game was called.

Chris had some unlucky dice rolls, but I have to say those Deathwing Knights are extremely tough. i may well have to consider investing in some in the future. It was a really great game and even when my Tyranid Codex fell off the table and bent the hardback cover it couldn't shake the positivity of the match. It was great to play against someone new, in a none tournament way and I'm really glad Chris asked for the game. Hopefully it won't be so long before I go back again, although this time with less physical damage to my models please ;) I can see lots of remedial work to Hive Guard, Zoanthropes, Flyrant and Biovore before Blog Wars.