I write a 40k blog, so as we stand on the precipice of a new edition I have to make the obligatory 'you must have been hiding under a rock' reference [and indeed White Dwarf daily used that very same reference!] not to know about what is to hit us in a weeks time. Cliche I know but if you take away the cliche what will I have left? It seems only right that I close out 6th Edition with a look at my Limited Edition version. 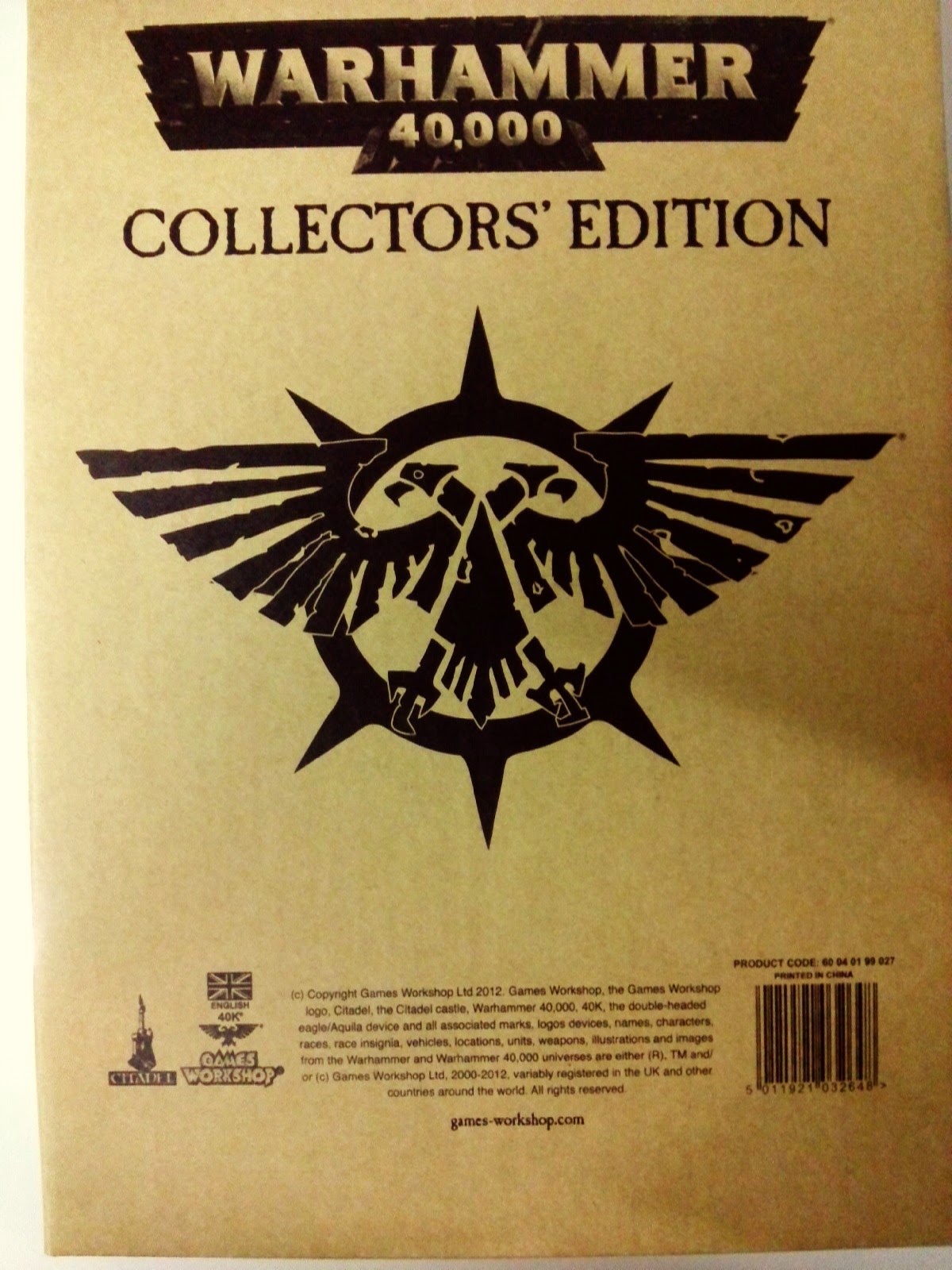 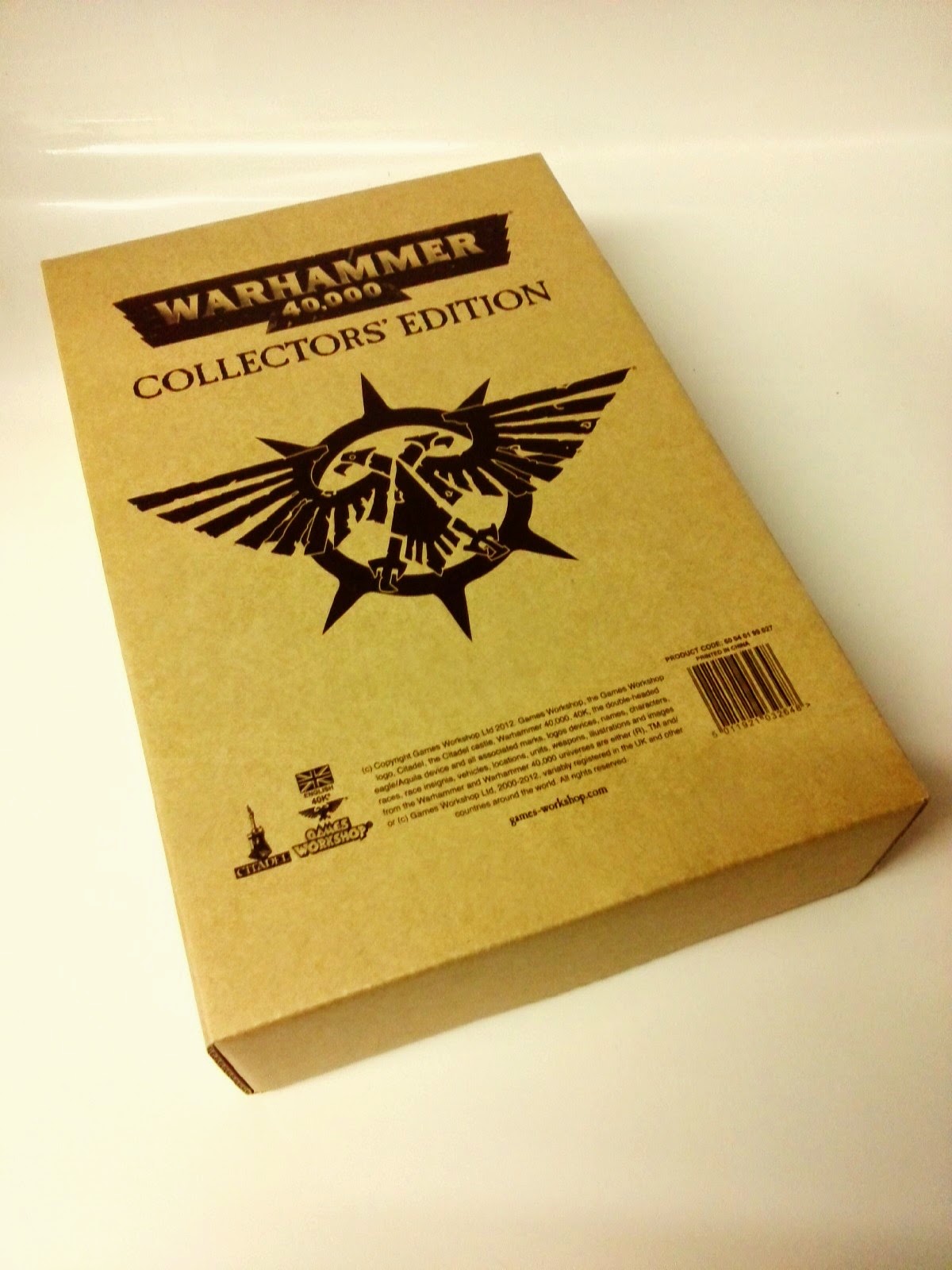 I explained my reasoning behind this purchase in June 2012, sadly GW's site update means all the pictures are missing now - note to bloggers, if in doubt save a copy of the images to your own space. Of course the most amusing aspect was the deluded 'I doubt I'll regret this...' 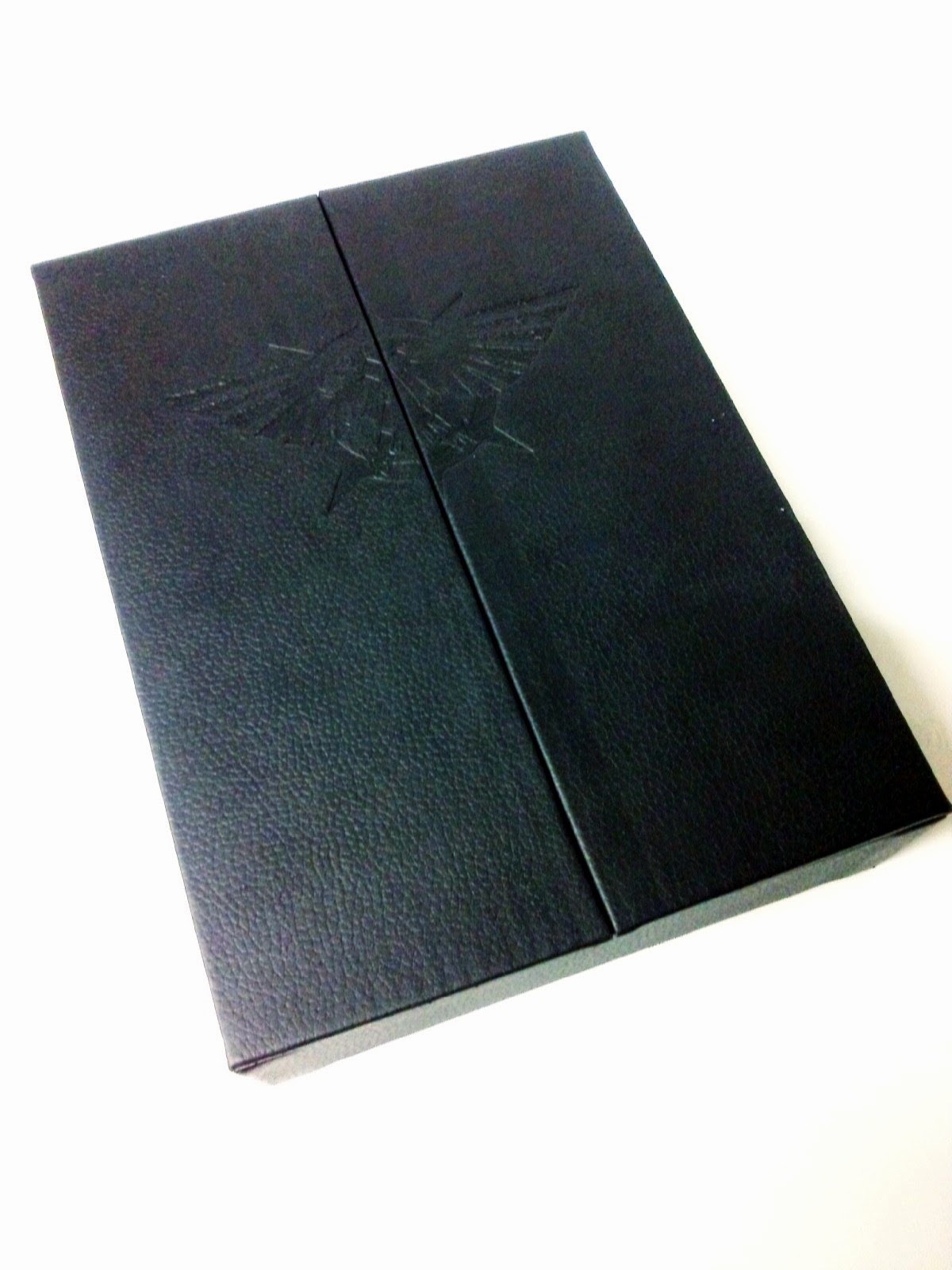 In truth I could have made double my money back. In the week after pre-orders ebay was awash with Limited Editions. So many peaople had been unaware they were available and missed out. They quickly soared in value, selling for £90, £100, £120. 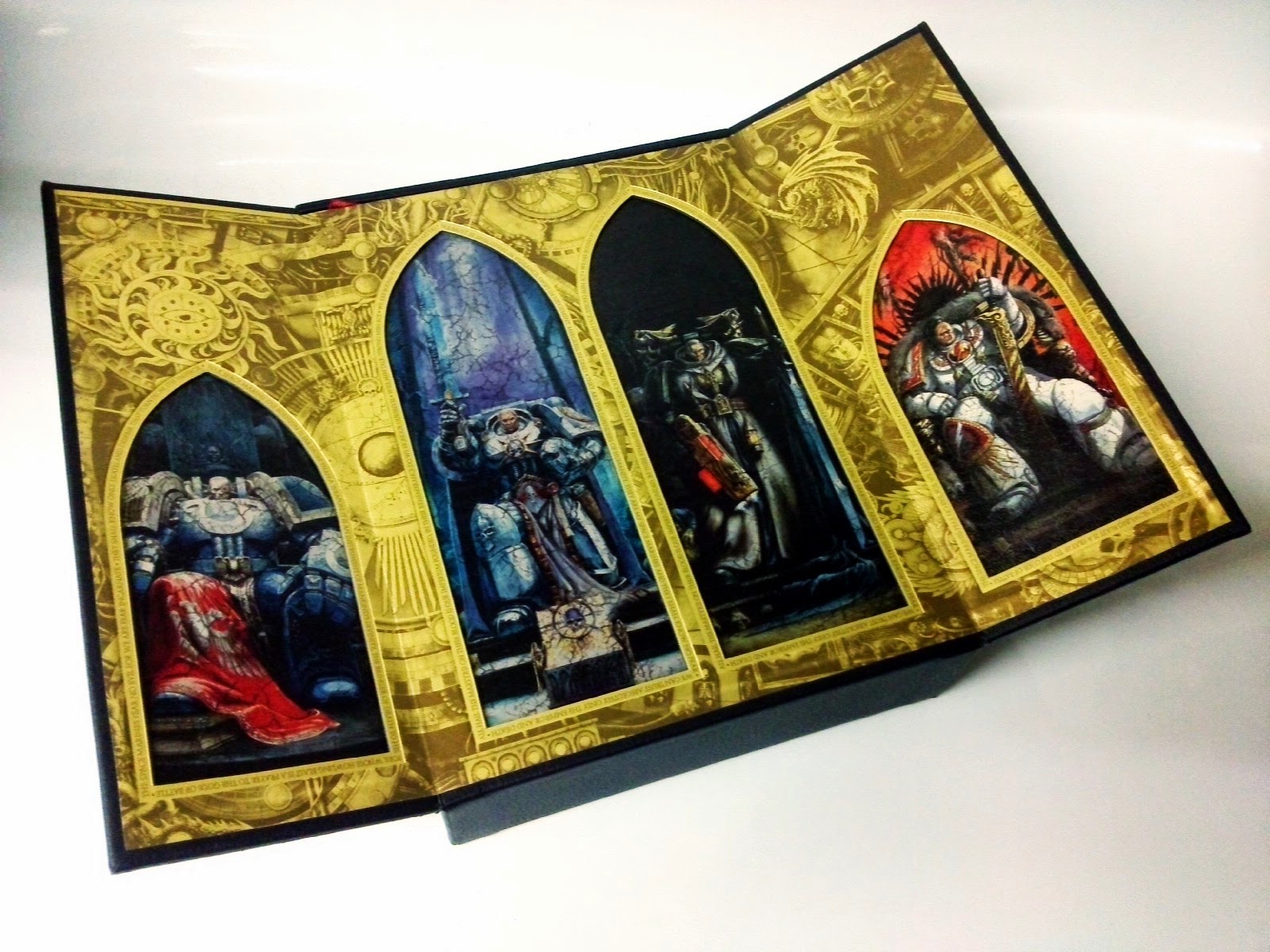 The most expensive I saw sold had a final bid for £300+ while someone managed to put quite a few on at Buy It Now for £150, which calmed the market somewhat, although probably making the £300 bidder violently sick in the process! 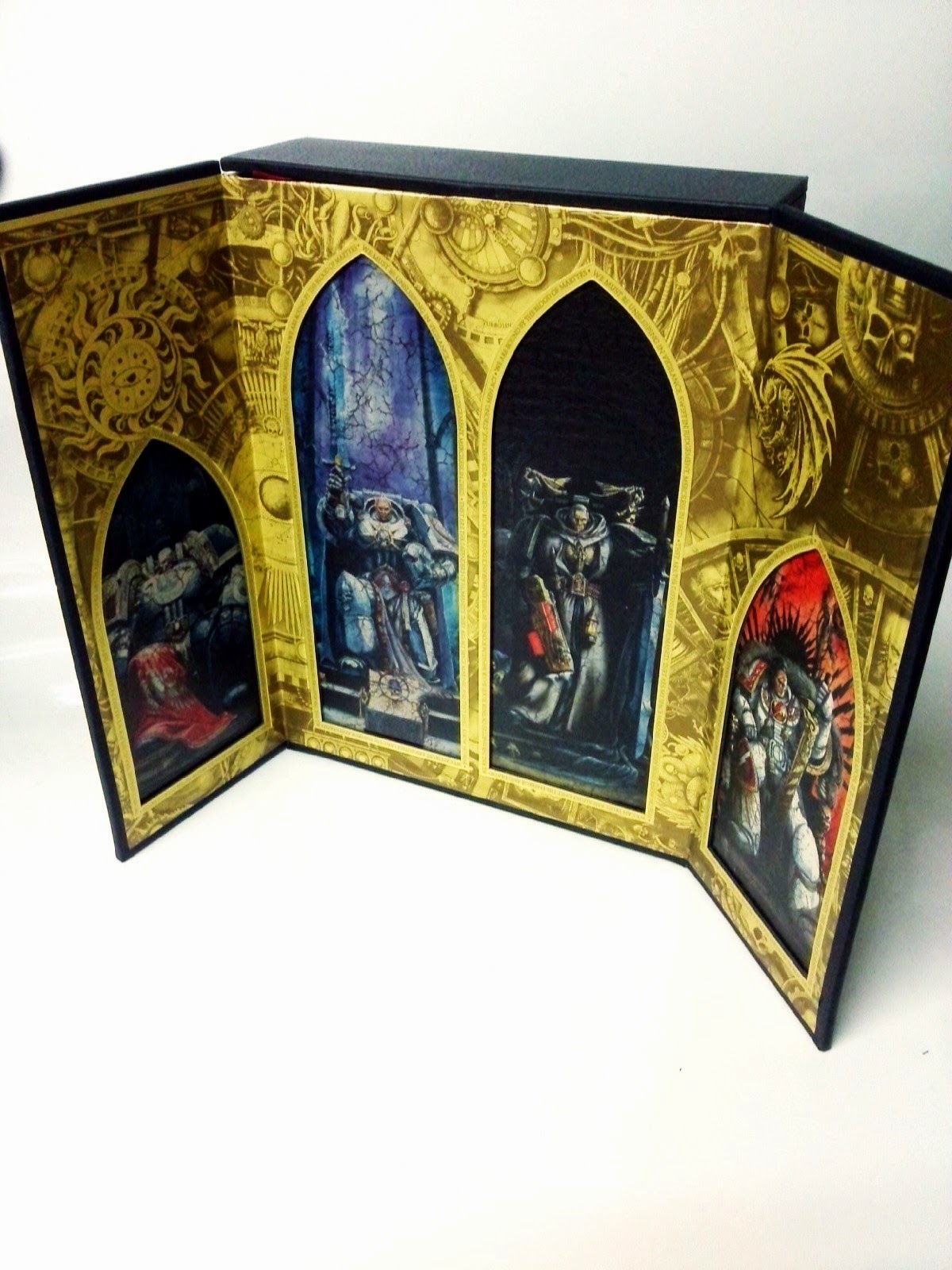 I was reluctant to create an auction for an item I did not have posession of so observed the mad scramble to sell 'unhatched eggs', even more ludicrous when you were unaware which numbered edition you were buying. Just imagine number 666 selling for less than 1372?! 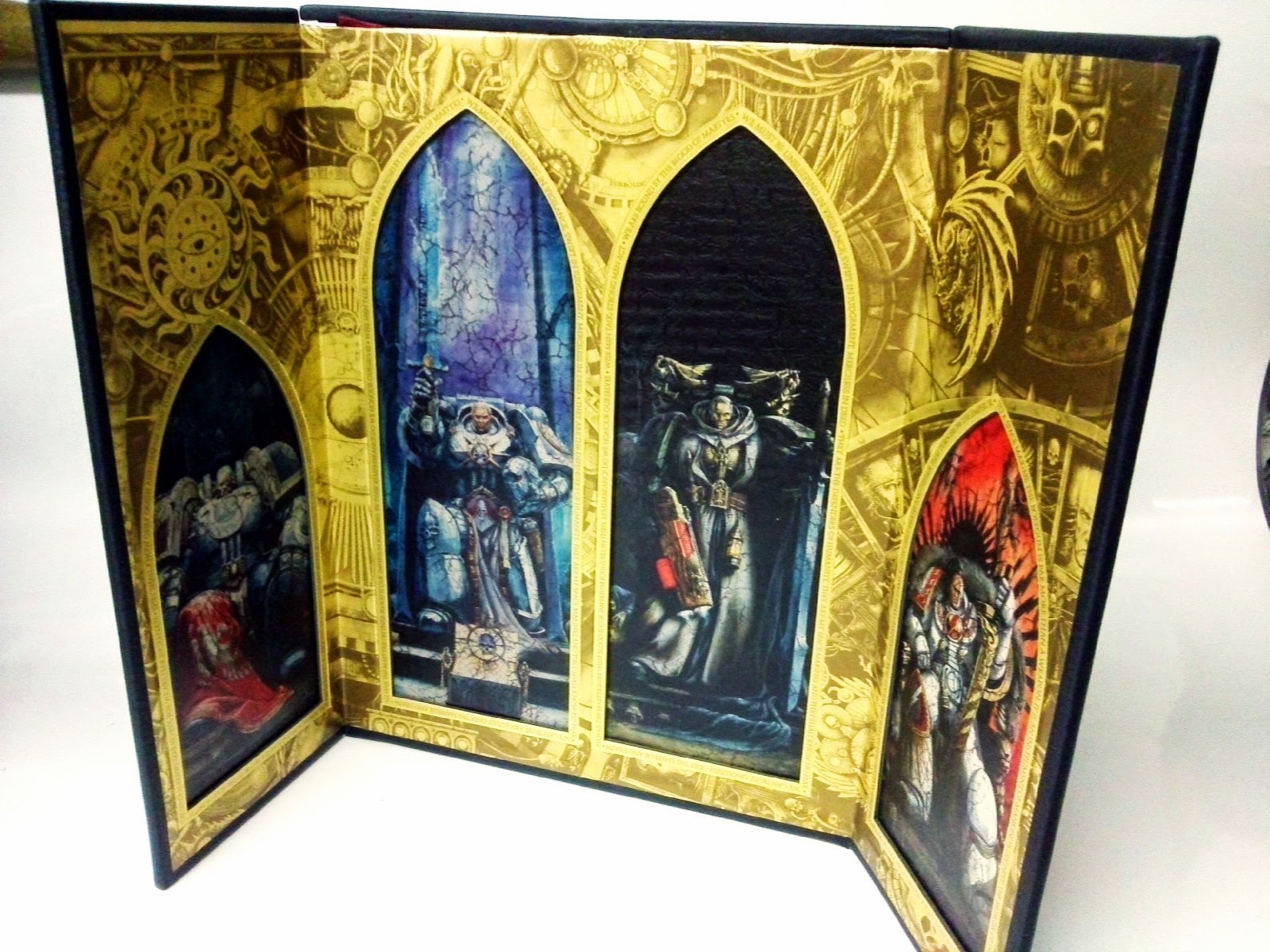 I also had a rather dubious ulterior motive, in that I photocopied the entire book so I could use my own spiral bound copy for gaming, while keeping the Limited Edition prisitine. 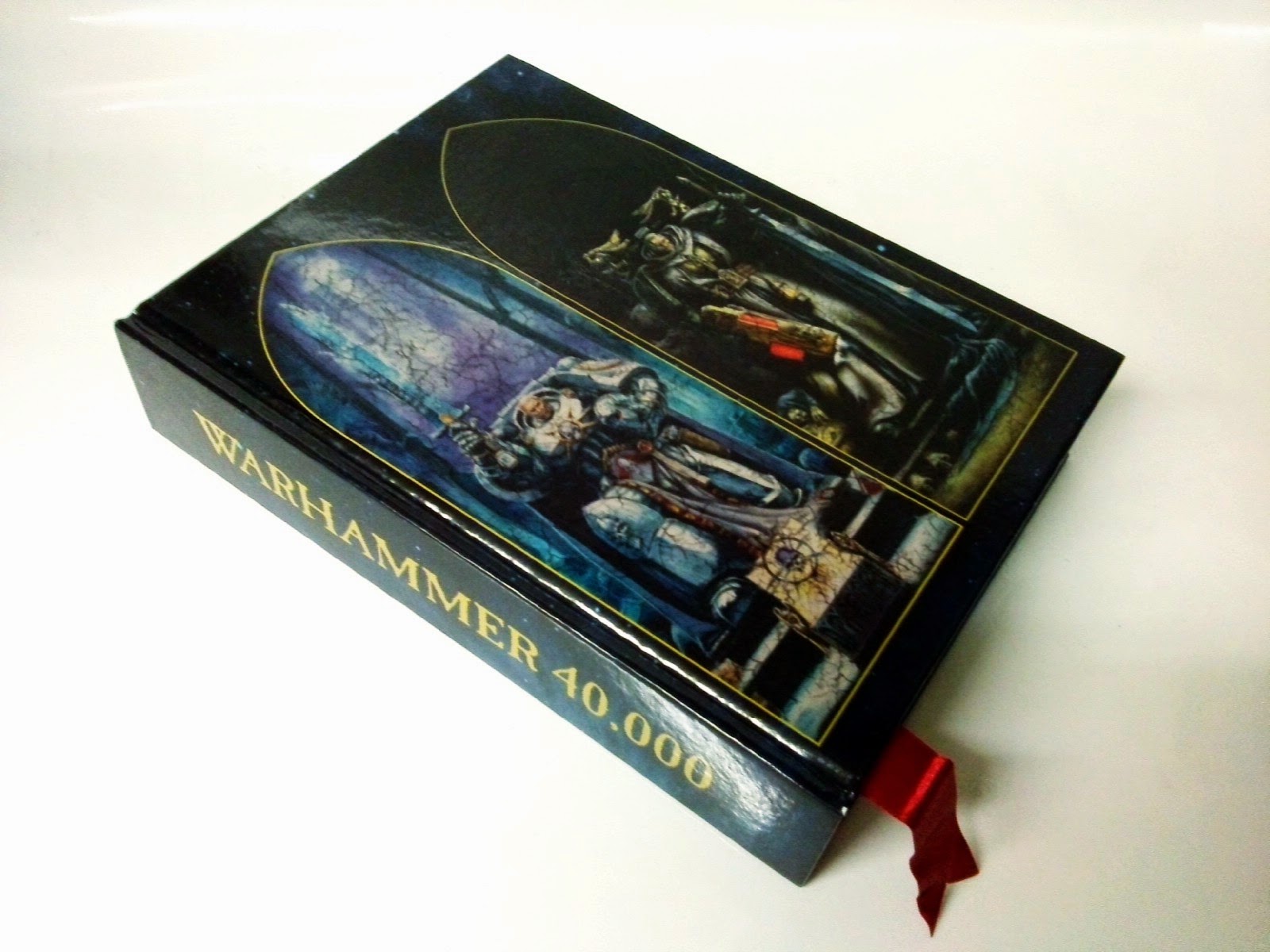 As it was I was fortunate enough to get the thoroughly unique issue 0931, but by the time the pre-order week was up the ebay frenzy had subsided. I assumed that as those initial auctions went the competition between sellers would be less fierce, meaning if there was only one auction you would have more bidders fighting over your book and potentially bumping the price even higher. 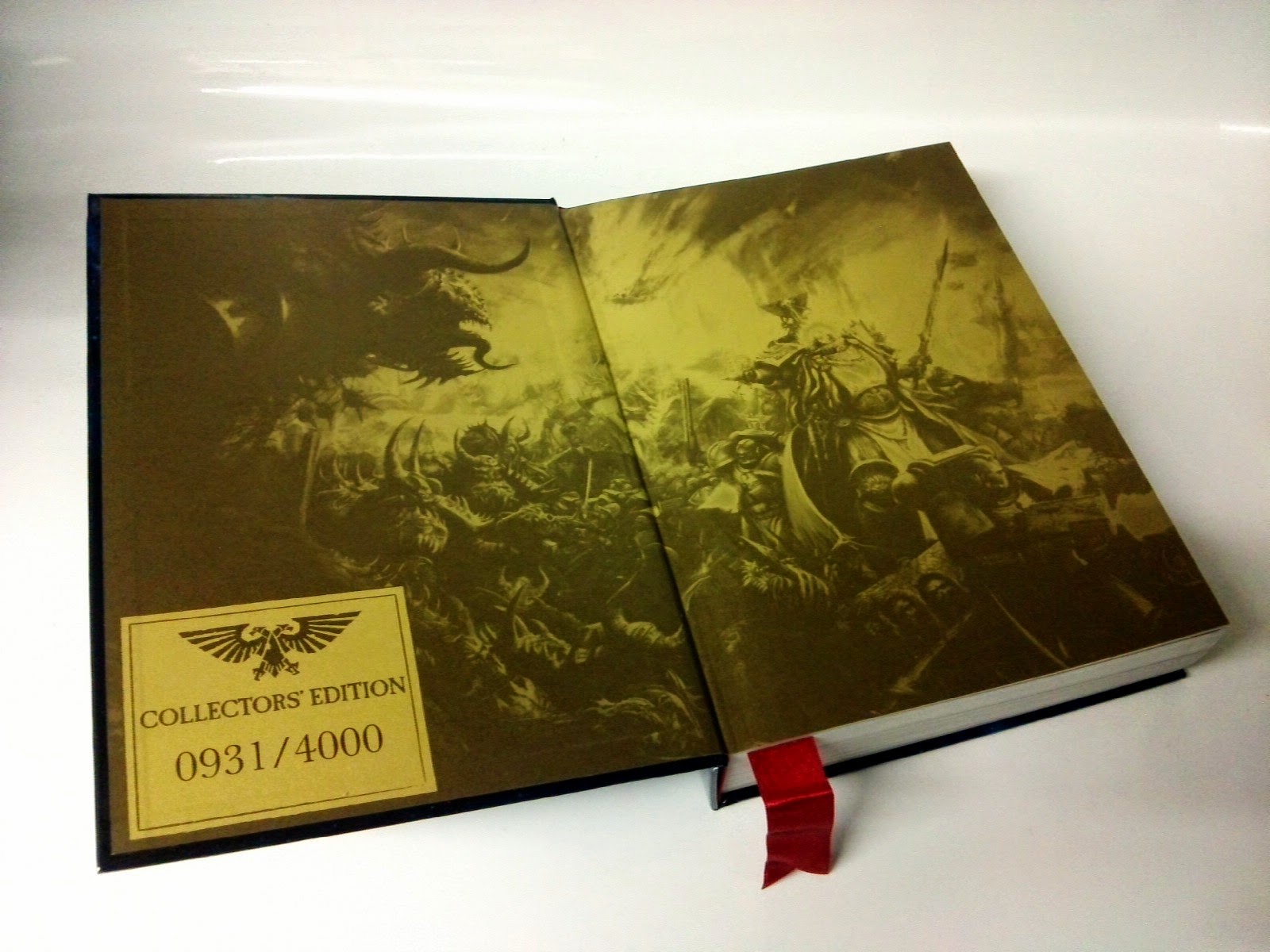 How wrong was I? It turns out that those few who were desparate enough to throw fortunes at these Editions were just those few. As time went on whenever I did a search for auctions of them you would see their winning value less than the hardback standard version. 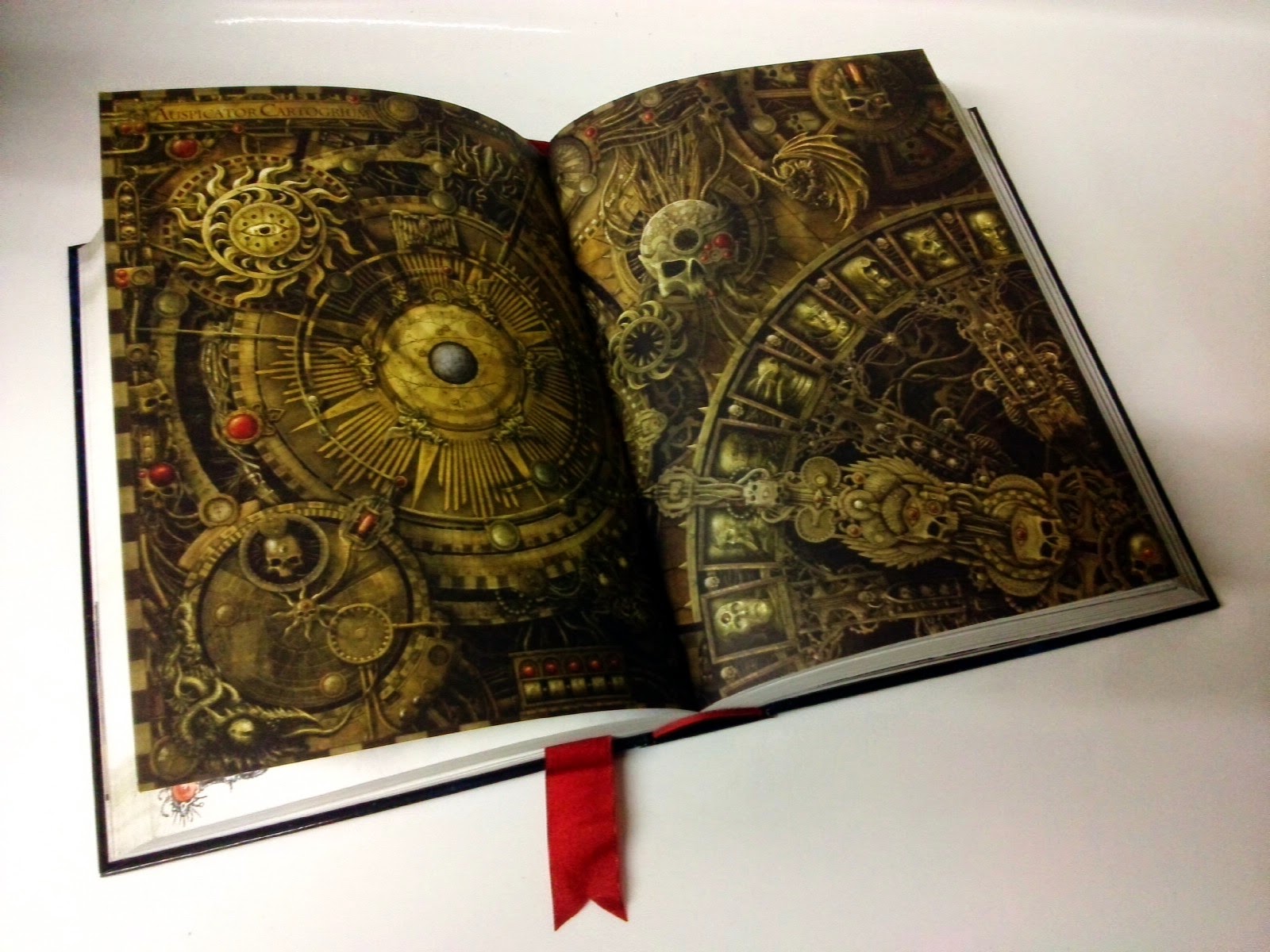 In fact, only the other week I saw one sell for £16, with about £10 postage! Prior to the rumours about the new Edition I'd actually resigned myself to the not unpleasant but certainly not the intended realisation that I will not actually part with it. I'd even considered using it for it's purpose as my gaming rulebook. However, it weighs a tonne and I've already got so much stuff in my gaming luggage I don't need have a forest to go with it. 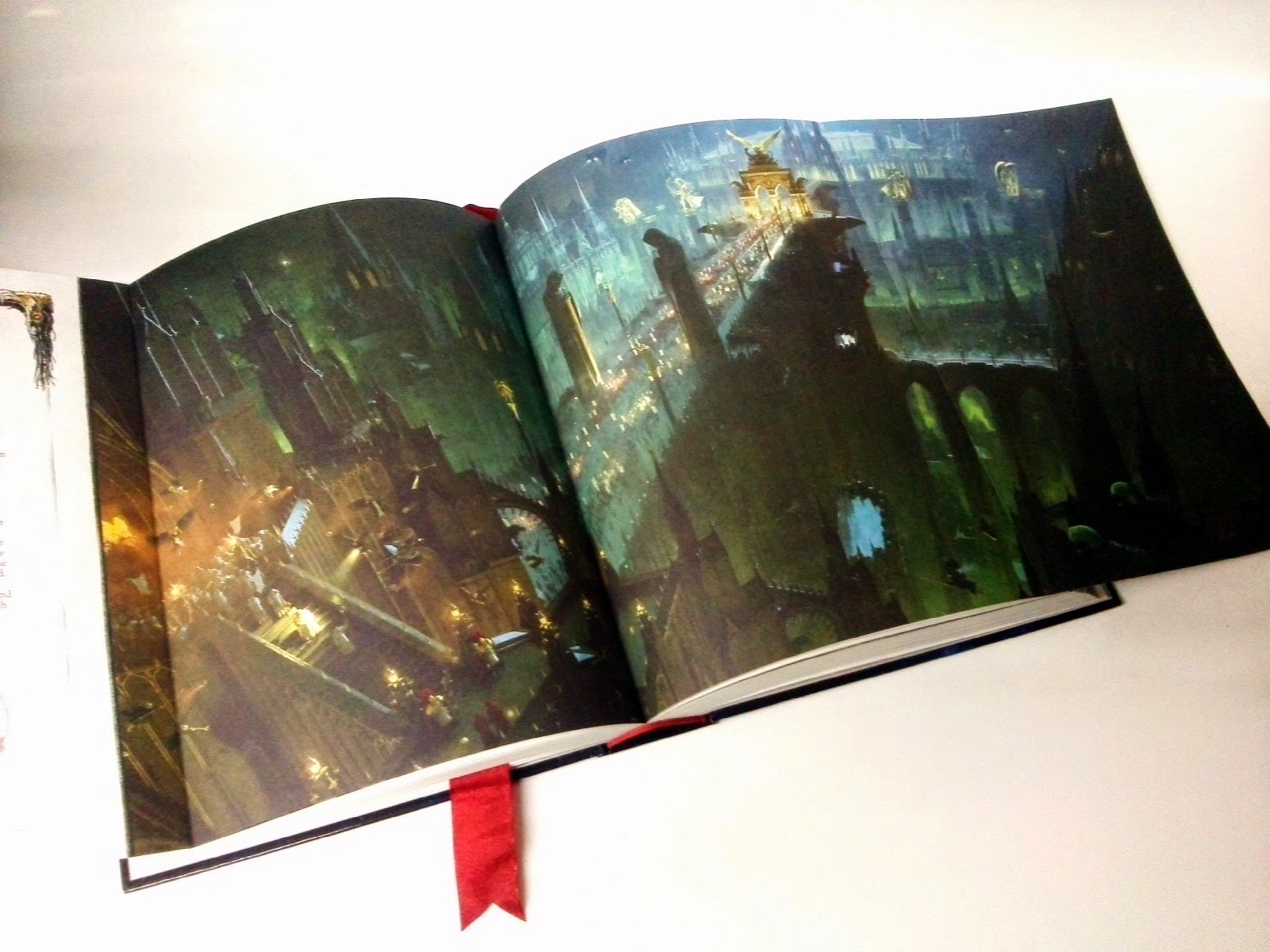 In truth, it is a beautiful object, it also taught me a lesson about the value of the Limited Edition items, I wouldn't expect any return on the new Munitorum Edition. Although I still thinke the Gamers Edition satchel may have retained it's value separately. 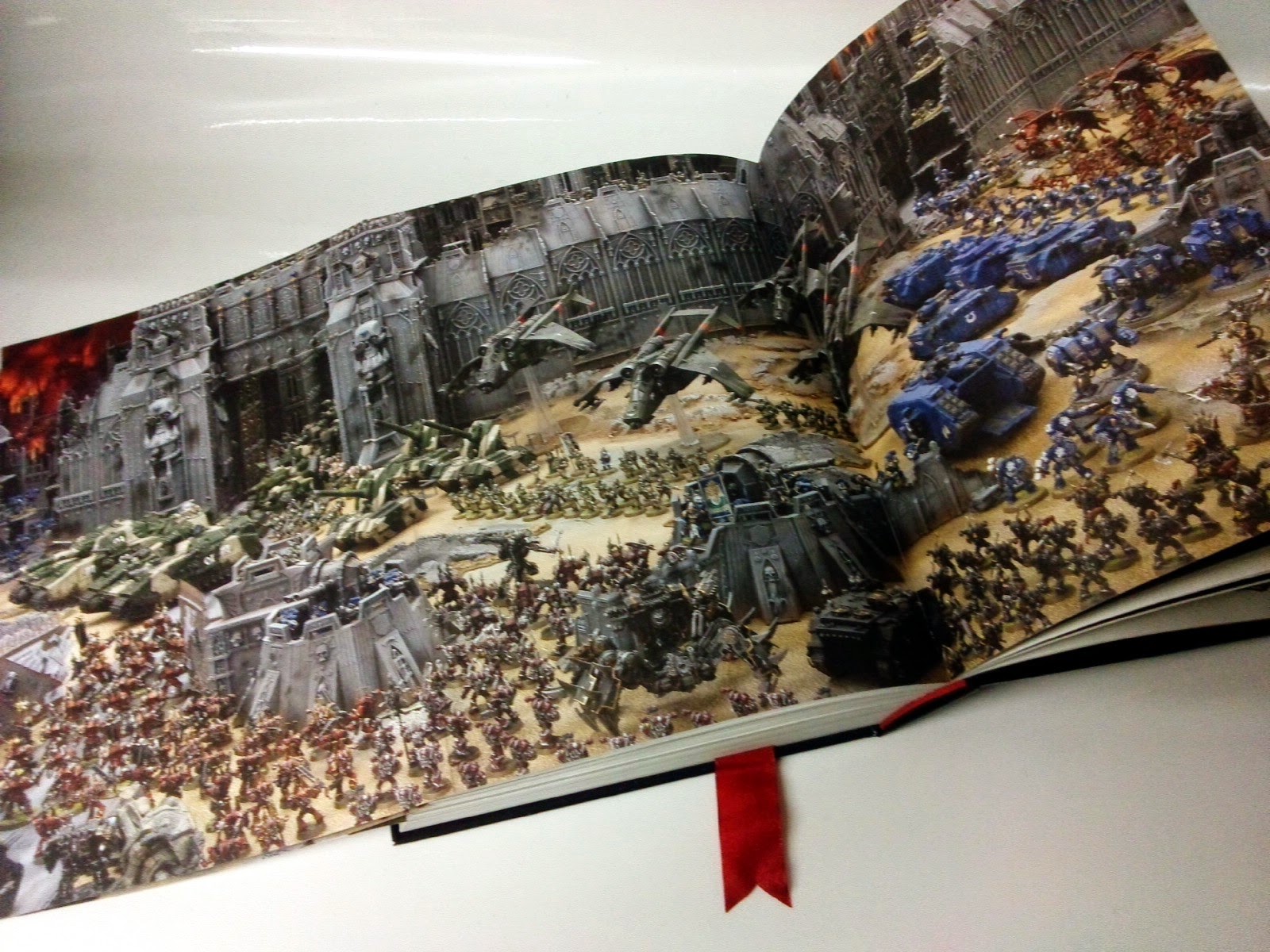 As the pre-order date for 7th arrives I will even be asking myself the question - do I want this '3 book' hard-back edition? If I want to read the fluff and imagery my Limited Edition version can supply that fix. There's only so much of the fluff GW can change/rearrange/deny so much of it will remain true. The rules are another issue, I will need those. But can I hold out for the box set. Rumours suggest the Ork/Blood Angels beginners set will arrive sooner rather than later. If you recall from my post two years ago the very same thing was said then, with limited copies available on the release of 6th with the bulk of the box sets available later in the year. That ended up with no box set until September/October. 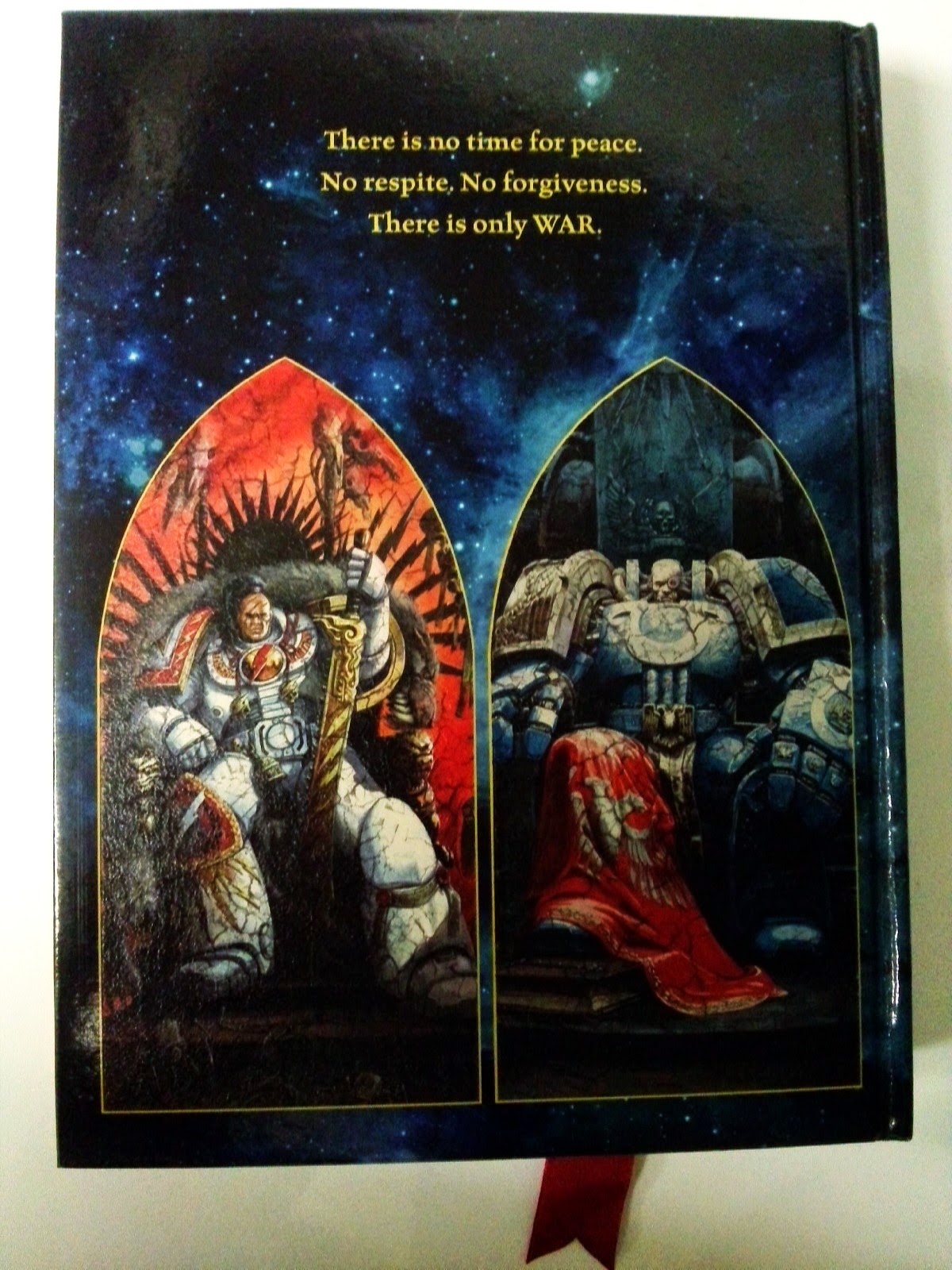 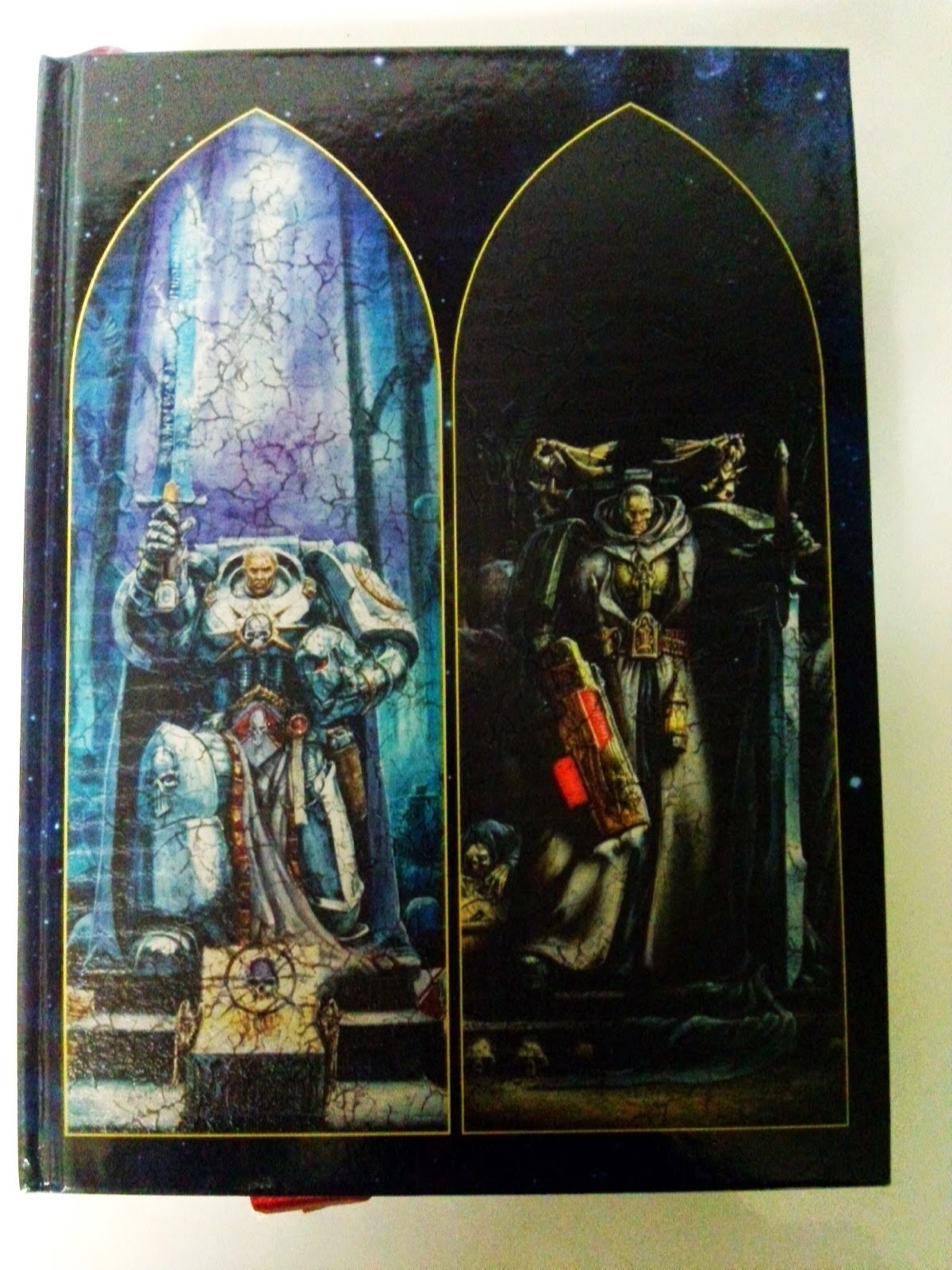 Saving £50 to spend on a box set with miniatures, isn't really an issue. In this instance I actually don't begrudge paying it, although £50 to spend on other hobby stuff is equally appealling. I firmly believe that those people complaining about GW changing the rules within 2 years are missing the fact most video games have a similar cycle. No one out there is bemoaning 'it's only been two years since the last Grand Theft Auto came out and they're releasing a new one'. I think the amount of pleasure and fun I've got out of 6th [taking the actual use of my Limited Edition book out of the equation, although the photocopy did get used extensively until Dark Vengeance] was well worth that initial investment and well worth reinvesting £50 now.

Personally I'm just reluctant to end up with another high-quality product that sits on a shelf when the mini-rulebook comes out with the boxset and indeed that £50 could co towards the box, or just some cool new figures. But I am also looking forward to the potential challenge of removing a slew of Blood Angel iconography, as other marine players were forced to do with the Dark Angels for Dark Vengeance. I'll probably see what the other guys are doing and decide on the day...
Posted by 40kaddict at 12:13