Blogging Networks or Blogging Notworks how blogging success seems to have changed?

I've been blogging since 2010 and I remember back in the day that I saw SO many people who started a blog and then never got more than a few posts done. I charged myself with the task of blogging every other day for a year. If it got too much I could take a break but thanks to scheduling most of my posts in advance it's been quite a run, three years on [I know it's just started getting patchy ;) ]. In the beginning though any increase in traffic was great news and I think I've reached a place now that I never dreamed of. I think I've learned a thing or two and as other folk start down this path I thought I'd share an observation should you be wanting to take your blog to the next level.

Back in those days if you wanted to get noticed it was blogging networks and blog rolls that you had to be on and if there was only one blog roll to be on it was Ron's of From the Warp. Now Ron has been on hiatus from blogging for the last 16 months [come back Ron, we miss you!] but to this date, outside of google searches, From the Warp has referred more people to my blog than any other source, the main reason I still have the FTW blogger group logo on the right hand side [the other being it's very cool]. You can see I'm also a member of Tale of Painters Blog Network and the UK Bloggers Group, I even used to have the BoLS banner up there too. In truth though I'm not sure if any of these 'memberships' brings new readers or followers to the blog, certainly not based on the statistics my blogger dashboard tells me. This isn't a dig at them, it's not their fault, viewers can't be forced to follow up links I just think people are creatures of habit, they go to a location and do their thing, if they link to something else it must be pretty special or pushed in such a way to be worth following. However, no man is an island and so it's important to be part of the community so I will still continue to promote those groups I've committed to on my blog.

What I do find is that if you want folk to come to your blog then you really have to do the leg work yourself. Blog rolls work a little better, certainly Faeit212 is the place to be and Natfka openly wants new blogs to go on the roll. I think his blog has massive readership and quite a potential audience but equally the blog roll is large so your place within it when you post will rapidly be taken by someone else's post. Anyone who gets on his BlogExchange will see a massive surge of hits but once that post is 'yesterday's newspaper' there's no guarantee you'll retain those readers. So if you haven't applied to be included yet I'd consider when you want to be added, probably not in the infancy of your blog

There are a number of other blogs that when my blog has been mentioned I've had a surge in visitors - www.fritz40k.com was one, www.3plusplus.net  was another. Recently someone posted a link to my Tyranid Aegis Defence Line in a comment on a BoLS news story - I got over 2,000 page views in one day!

However, a lot of my views come from forums where I'm actively sharing the work I've done, most often a short precis of the larger blog post. That way folk can either take what's offered or come to the blog to find out more and hopefully experience everything else on offer. Equally Facebook Groups and Google+ are a great way to access 1000s of people already interested in the hobby.

What I'm trying to get at is that there are options available to grow your blog but my evidence would suggest it is no substitute for hitting the streets and promoting it yourself. There are definitely sites that if you can get featured on will greatly increase your traffic but the double edged sword is that 'with greater traffic comes greater responsibility' with more followers your obligation for decent and more importantly regular content is increased. If you want to take it to the next level then you have to make sure you're delivering a 'next level' blog.

One other downside to 'keeping score' is it becomes obsessive [like I need any more of that!]. Constantly checking hits, trying to predict how you will do this month compared to last - it can get a bit much. For instance in December I managed to break the 20,000 barrier, not bad when a lot of folks were spending time with family instead of trawling the interwebs. In January I eclipsed all the freebies and Capillary Tower content from December with a 25% increase in page views! I've also noticed that weekend posts often get less traffic than a weekday post. Never assume your audience has loads of free time at the weekend, if they do they're probably out enjoying themselves, they're not you, they're not a geek with a blog who sits there watching their stat counter. ;) So if you're ever deciding which blog post to cut, I'd recommend Saturday or Sunday's! 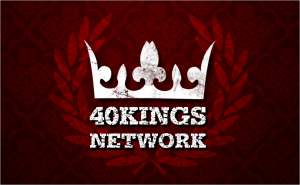 I'm not saying blog networks are a waste, far from it, you should be part of them, but I think they're less successful than they used to be in introducing people to your blog. From my experience there's really no substitute for hawking your blog yourself. There we have it, a little peak behind the curtain at 40kaddict Towers, maybe some advice that can help with your own efforts. Just a reminder too there's still an open invitation to anyone with a blog to be featured in my own 'Support your local blogger'. I'm not a network but those that have been featured have seen a few extra hits. So feel free to leave a link in the comments section, perhaps a link to an image, maybe a description and I'll put some of them up and see if it helps.
Posted by 40kaddict at 12:47