Nearly six weeks since my last confession...and how've I been doing?
So there are some pics to follow for most of these. But first up here's the last aborted attempt for the Skyshield walls that resulted in me 'keeping it simple' and familiar with the frame and Milliput process. I tried using Silicone Sealant which I probably would have gone with except for one thing - it's Silicone, nothing sticks to it! I thought a coat of Vernidas might 'set it' hard, but it cracked when I flexed it. Equally Tamiya Clear Red X-27 wouldn't stick to, or harden it. So although I can create a nice organic shape that looks like alien excretions it's not going to solve my problem. I'd just like to point out the ultimate solution would be to create the walls in Milliput, then make a mold and cast clear resin for the ideal effect I imagined. But that's not the simple answer, which, given the time available I need to go with. So that leaves us where we're at - with building the five remaining frames. 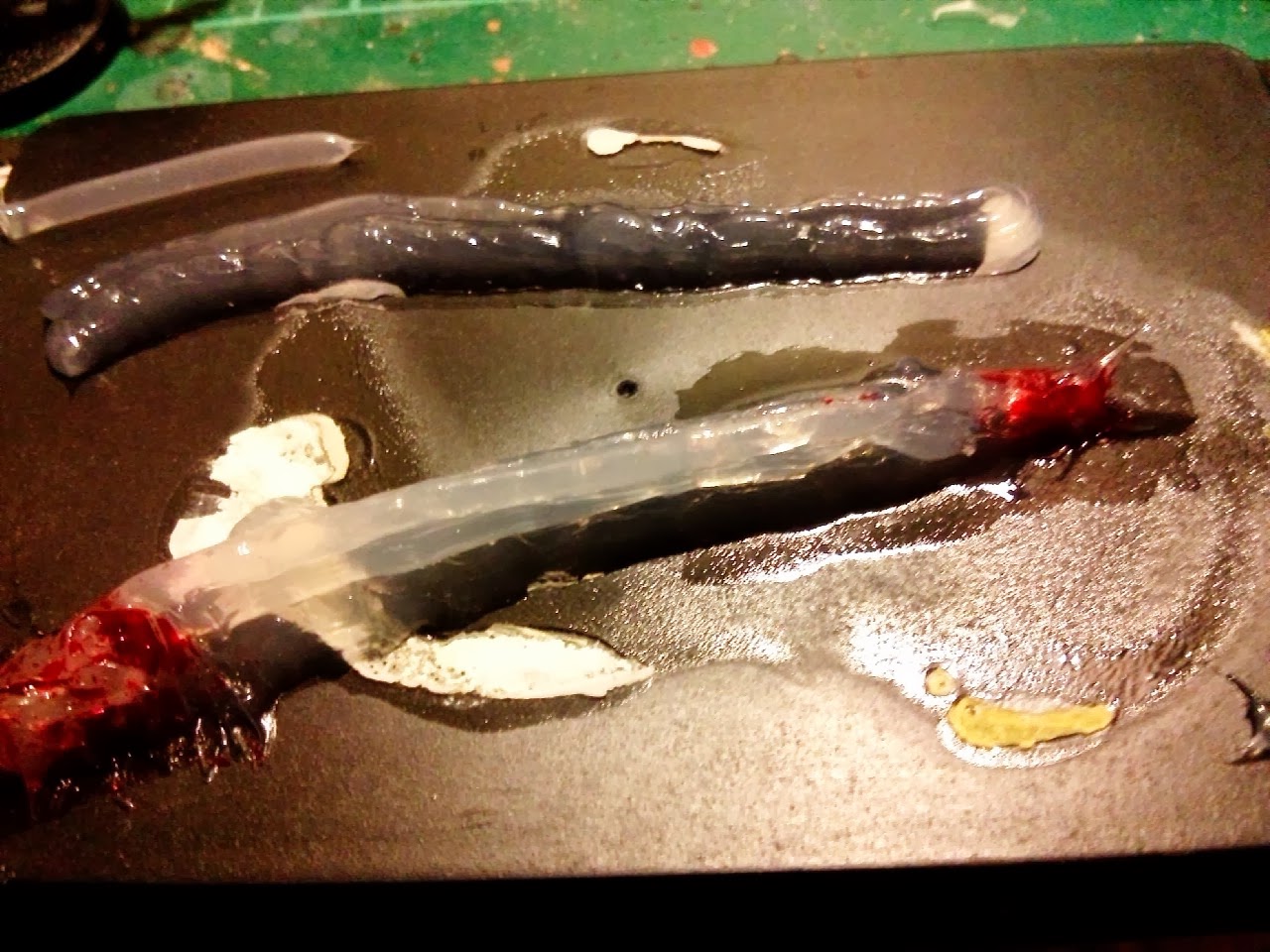 I'm going to base the gaunts first and then add the colours after, the advantage being the rough and ready drybrushing is covered up by the neatly applied Termagant colour scheme.


I thought I may as well start the final 10 at the same time, no point waiting. Three needed paint stripping with Fairy Power Spray and two needed remedial repairs to their base. Had some fun putting adrenal glands on the base of their tails. They're more for identification purposes really than upgrades.

The Dark Vengeance Deathwing, again I'll do the bases at the same time as the gaunts. At least they've progressed since my last 'confession'.


Another Tervigon... I don't know why either? It was £24 and it was one of those ebay auctions that you bid on and suddenly find you're winning and then hope someone else will snipe it before the auction ends. Still, for Throne of Skulls we're not supposed to have proxy models, so I'm not sure whether I can still justify my Carnifex/Tervigon conversion any more. It's new rules so maybe a new regime. Either way I'm going to try and magnetize it so I can maybe use it also as a Tyrannofex. I've applied Fairy Power Spray to all the joints. It does help to break down the Poly Cement weld a bit, sufficient to remove the head so far. I'm replacing the Tervigon head [which I've already used on my other Tervigon] with my spare Tyrannofex head, but, I'm removing it's lower jaw and adding the spare Mawloc mandibles. The T-fex jaw has a blade underneath that obstructs the Termagant spawning sack. The Mawloc mandibles will frame it instead, although those 'bamboo' crests may have to go. Either way the opening may make a decent representation for a mouth mounted Miasma Cannon - given it makes a Miasmic 'Spit' attack and it'll look cool and different too!

I had plans to make a couple of Tyranid Void Shield Generators for Throne of Skulls too. This was the final epiphany from my last 'What's on my palette'. I'd thought to create a couple of them, based on the following  concept but I can't take them AND my Imperial Strongpoint so they're hanging fire and I may well reconsider the design. I actually added the 'battlements' with suitable room for 10 gaunts to 'man' them, but then noticed they're 'impassable' buildings so didn't need to add space. Anyway, they may or may not get done, we'll see. I also took out the bits for my Tyranid Icarus Las-cannon emplacement but have decided not to pursue that just yet as it uses the T-fex Rupture Cannon I may need to magnetize to create my Tyrannofex. 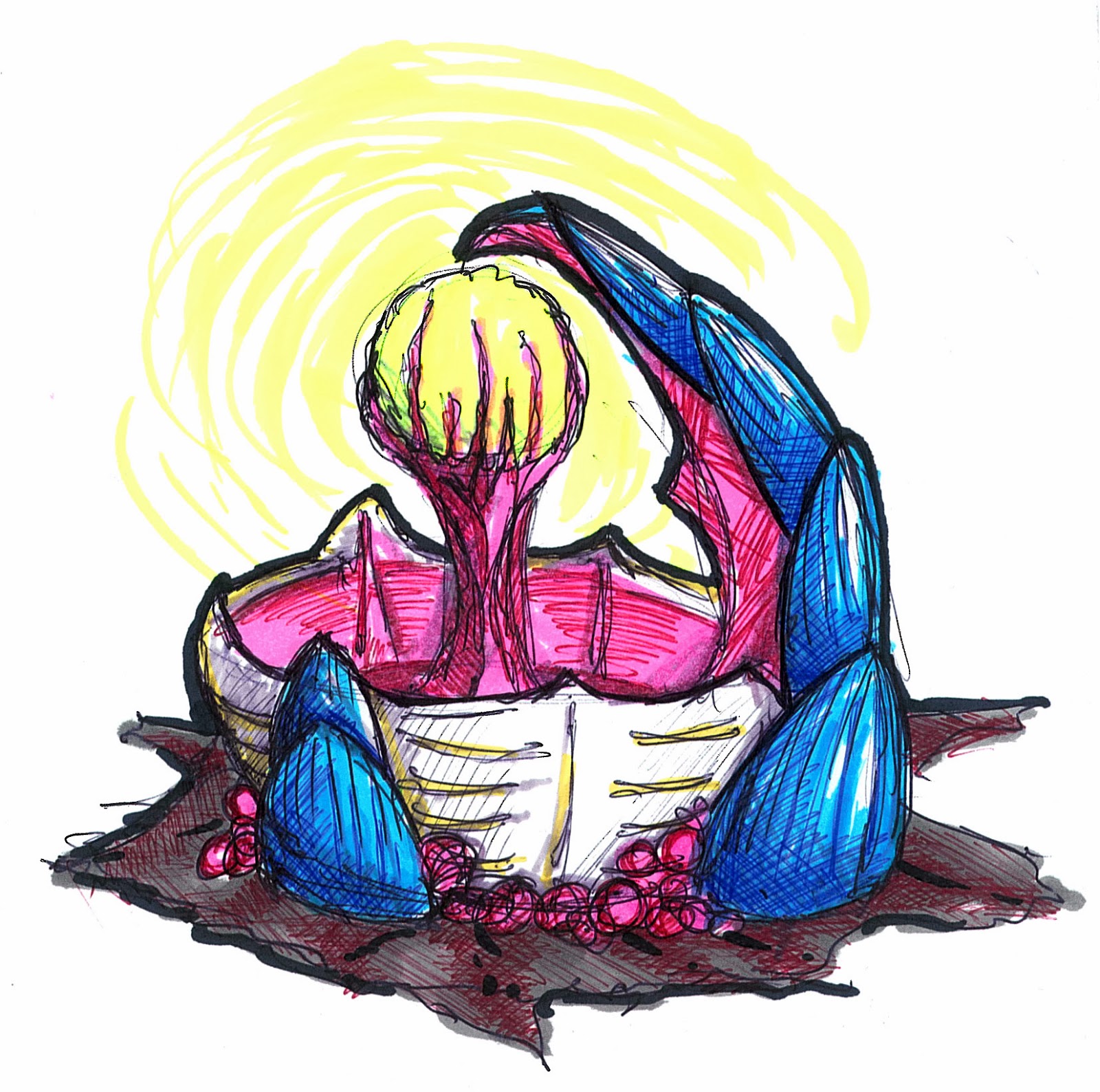 I also picked up 3 more Tyranid Warriors and a Carnifex on ebay. I intend to make 2 of the Warriors into Hive Guard and have the remaining one either with a Venom Cannon or Deathspitter. The Carnifex was also a bargain, I think in total I may have made something like a 65-75% saving and this came fitted with a Fleshborer Hive to make it a Dakkafex, which was my intention anyway, bonus! I also plan to pick up a Venomthrope, two more Zonathropes and one or two Biovores, depending on availability. To cap it all I may go insane and look at something from Forgeworld too! I might be able to get a good deal on something so we'll see. So much for my Winged Tyrant being the 'treat to myself to celebrate finishing the Tyranids'.

And THIS is why the Dark Angels are languishing! So I've still got to get the following done:
That's the priority order. Everything except the Termagants would be nice to have, the gaunts are essential.

PS, I also broke the 200 follower barrier and had an increase in the amount of hits this month by 25%! High Score again - you guys rock!