I got to open my 2014 account with PeteB the other week. New Year, New [OLD] Codex. This isn't a battle report as such, I wasn't paying too much attention to keeping track, really it's an observation of how things are different and how they may be very much the same. PeteB took the photos, I was too flustered moving bodies, and OH how many need moving now! Due to the opposite view that PeteB had it's another reason I'll struggle to describe the action as it unfolded, but I'm extremely grateful for his impression of David Bailey ;)

We set up the terrain as a sort of Xenos-henge, with my Capillary Towers surrounding a reclamation pit and various craters and redundant Spore Pods for added LoS blocking terrain. It was Vanguard strike and I think there were 3 objectives, I had one and PeteB had the other. I may have stolen the initiative which allowed me [thanks to Catalyst] to run my Termagants over to the Infiltrated Striking Scorpions on my left. 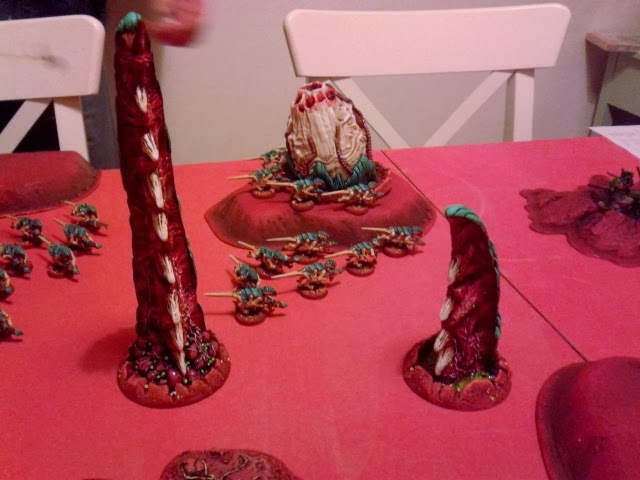 Thanks to the mixed load out of Devourers and Fleshborers [+1 to the new Codex] I was able to bring 34 shots to bare on the Striking Scorpions. I think this translated as 2 or possibly 3 dead. The real concern was that my Tervigon was now only just in Synapse range even with a conga line and where as in the past I'd have spawned some more gaunts to man my Quad Gun and then moved off to support now I had to move and then spawn. It was a very fine balance, very difficult to reverse the previous order of action and having to think ahead of where the Tervigon will be and not where it begins was extremely hard. 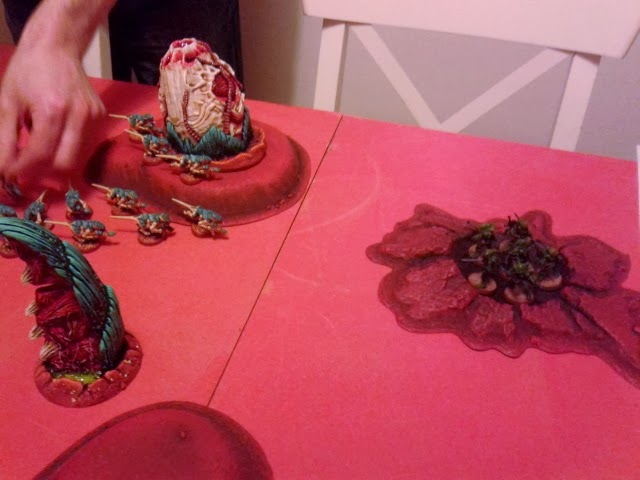 The real issue that presented itself was just how damaging Instictive Behaviour can be. It was at this point that I realised should my 30 Termagants fail IB they could potentially fall back. As you can see, it's a big brood and in heading left along my board edge I was only 7" from potentially fleeing. It's here that I realised how detrimental IB could be [-1 New Codex]. In the old days that would never have been a worry. With such a potential failing I wondered why it was a 50% to run off the board? Surely a 1-2 is fall back 3-5 is Seek Cover and 6 is the lucky bonus one where you Seek Cover and get Stealth. Think about Grounded results and reserves, they're on 1-2 - the bad things happen on the lower rolls. I'm sure if the odds on something bad happening had been reduced the IB chart would be less contentious. 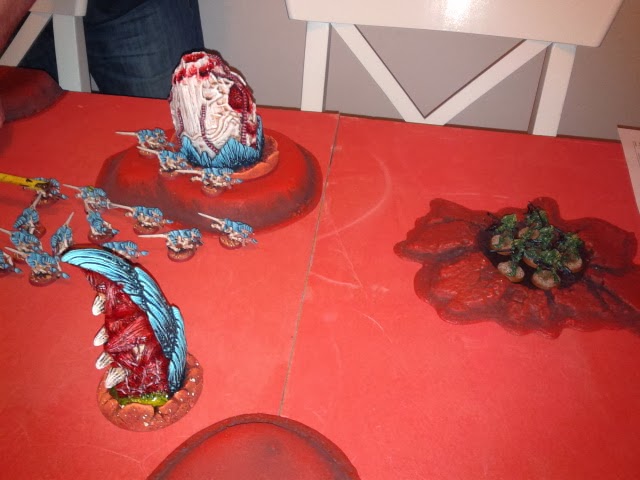 Spore Mines were the other anomaly I discovered. Considering how there is nearly half a page discussing the various rules relating to their use it seems lacking in how they actually function. There seems to be no proximity detonation anymore so PeteB's Eldar were free to dance around them like they weren't there. There's also no clarification of what happens when they are shot at, do they explode as per their rules or just get shot. This was in the old Codex I'm sure, so why not cover the situation here? The last thing is can a cluster explode from deep strike? Presumably not as the explode in the assault phase, and Deep Strikers can't assault.Although it does not say they are assaulting, just explode at the initiative 10 step. Otherwise you're paying for a unit that sits there and gets shot to pieces, which in fairness is what most every other Deep Striker does but these are T1, their sole purpose is to drop in and explode, if they have to wait a turn there's just no point and for me would move from an auto-include: potential S9 large blast Deep Stike for 30pts! So, I'll probably not bother. 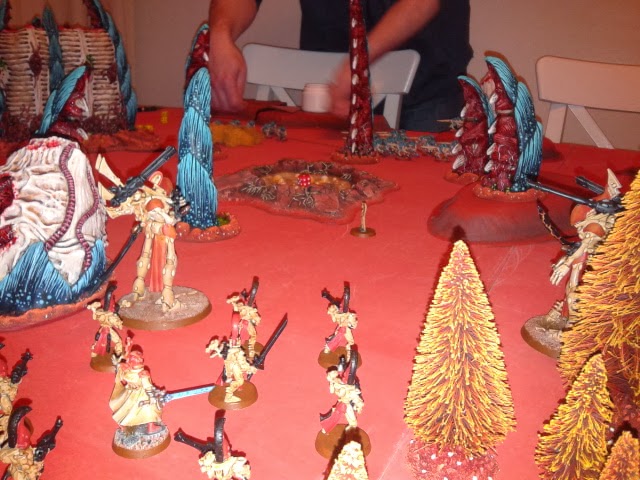 In fairness to the new Codex the end result was not really due to a change in rules, despite the lowered BS my Hive Guard are still ineffective against high armour saves. Strength 8 will wound a Wraithlord, it just won't damage it! :( 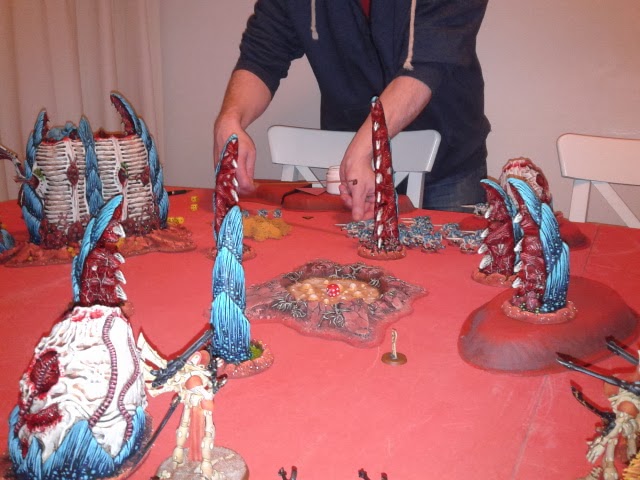 So with my major concern over Synapse it suddenly became imperative the Termagants were shot again, that way I could 'go to ground' thus making me immune to IB. All I then needed to do was get my Synapse within range and they would automatically recover. This Duck and Cover approach will become a nid players friend I think. Everyone needs to get with Bert: 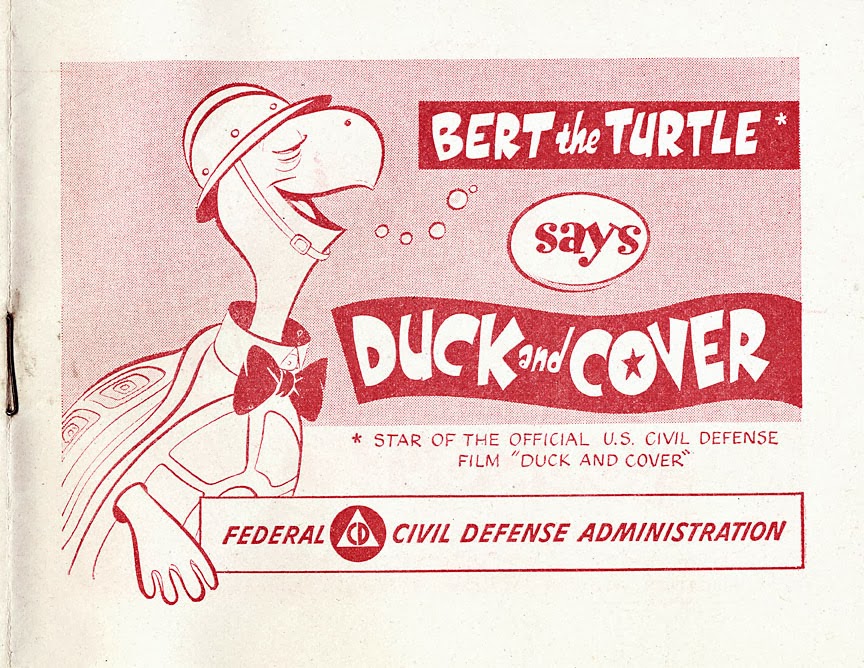 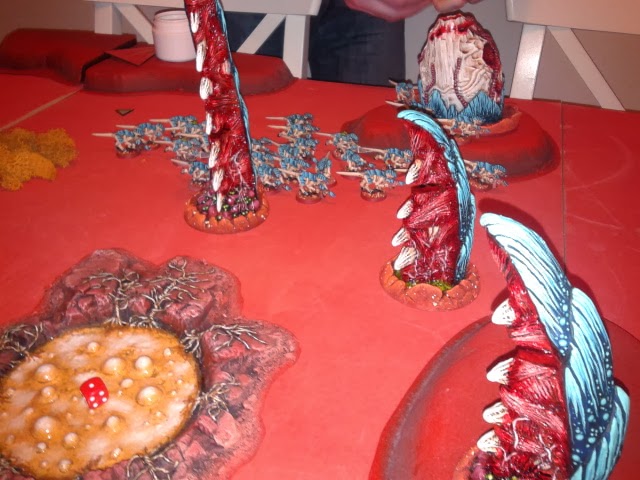 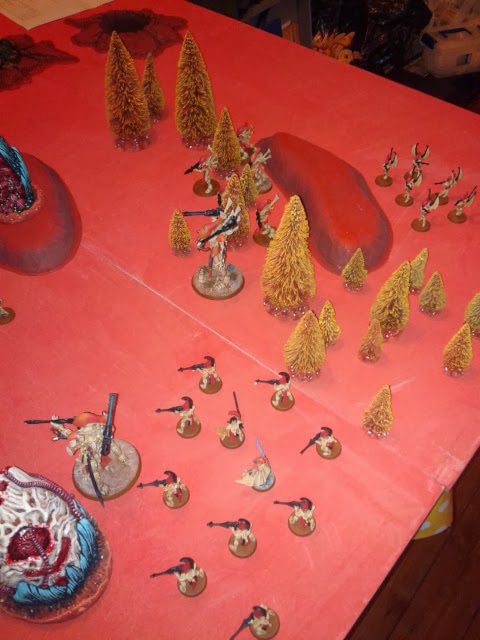 My Flyrant came in no problems, I was hoping I could force a Morale check on the Dire Avengers and being close to the board edge hopefully they'd flee off. The planned worked, insomuch that I killed sufficient to force the check but they passed with ease. Which left the Flyrant very exposed which resulted in him being dead the next turn 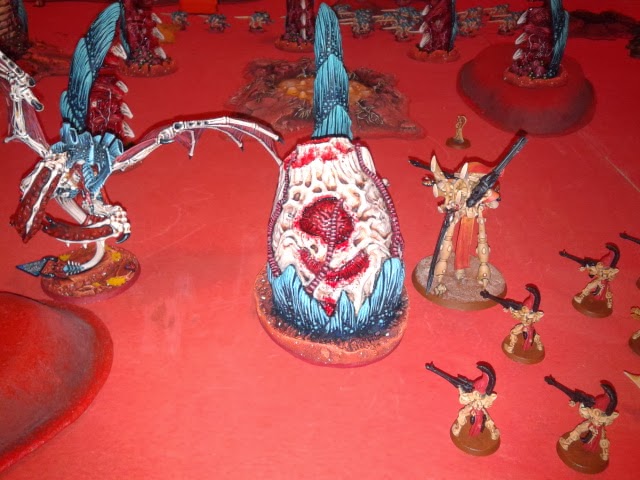 Incidentally I did get another round of fire on the Scorpions, after they fled back up field but rallied in their turn. Another 34 shots but I think only 1 kill! 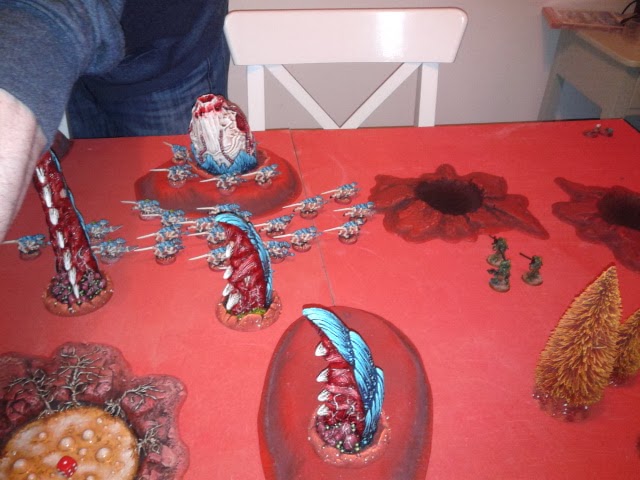 With my Termagants instantly recovering with the Tervigon getting into range I headed for the little objective on the bottom of the pic. I was hoping Catalyst might put me in a position the Wraithlord couldn't reach but sadly it wasn't the case. In the end the Termagants were tied up in combat and PeteB was hard pressed to get rid of them, he even claimed they were worse to deal with than what I used to field. I suppose max brood size does have it's benefits. 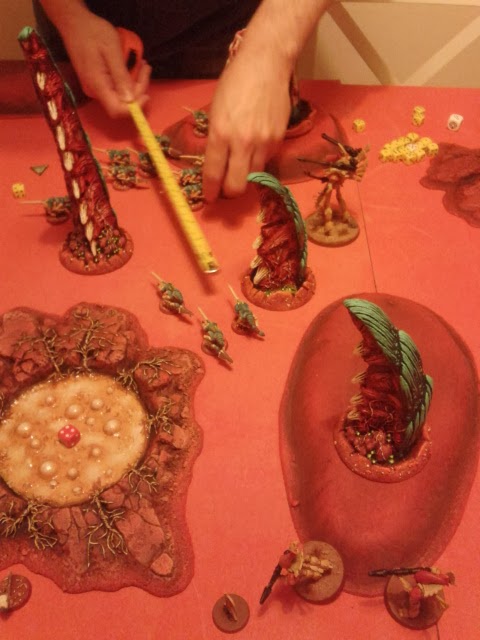 There have been plenty of reviews on the internet of the new Codex, many I agree with so I'm not about to repeat what's been said, particularly when they've often been comprehensive of their unit by unit analysis. What I am going to say is I am one of the disappointed Tyranid players. Apparently that means I'm a whinger and WAAC player as all those who have found light in the new Codex.

I really think it depends on your view point and the route you've come to it. Having not played the 4th Edition Codex I was not hit hard by the 5th rules but I could understand the implications. Maybe that's what's going on here, new 6th Codex players are wondering what the fuss is about... the Codex is a disappointment because the pluses are far outweighed by the minuses. The things we've lost and the new things that have been implemented are not mitigated by the good stuff. The Flyers are a high point but even so they're lower price and higher wounds than a Flyrant are counterbalanced by the lower toughness which means they'll die just as quick, if not quicker. The Exocrine and Haruspex are still only slightly above interesting but with the resurgence of the Carnifex and it's real world cost - I picked one up with Fleshborer Hives as twin-linked Devourer [what I was going to do anyway] for around £13! What's the real incentive to go for the new model?

Anyway, I'll plug along regardless. This is only a slightly worse position than we were in 2010 and I was quite happy to continue sending the bugs out. I'm convinced I'll spend more time skulking again, hiding from fire and hoping to weather the storm. When you had durability you could be aggressive, without it you need speed and I really think we failed to get that. The only speed we had were Deep Strike capabilities and they've gone, if a way to replace that had been found it might also have solved the loss of Iron Arm.

Still it was an interesting dip into the new Codex, but very slow, it was 1am by the time we'd packed up! Hopefully everything will speed up but plenty to think about moving forwards and what to take for Throne of Skulls.

P.S. One other thing, anyone else find the positioning of the Weapons and Biomorphs section and the Colours of the Hive Fleets just a bit awkward. I'm constantly going backwards and forwards between weapons and biomorphs and the Army List section but to do so I keep having to flick past 22 pages of models. So much easier if the Hive Fleet had come before the weapons.
Posted by 40kaddict at 12:06