2 fers already! Well, what do you make of my Sphincter? I'm really surprised I was able to recreate the one from the top of my Bastion. It's really easy to achieve this, score three lines and then poke with a soft tipped bullet shaped sculpting tool. The outer ring was a clay sausage that was then embossed with a wooden coffee stirrer that had been but through a hole punch to make a C shape. With hindsight I just realised I have a hole punch with a variety of sizes that would have been much easier to create the tool but it still worked. 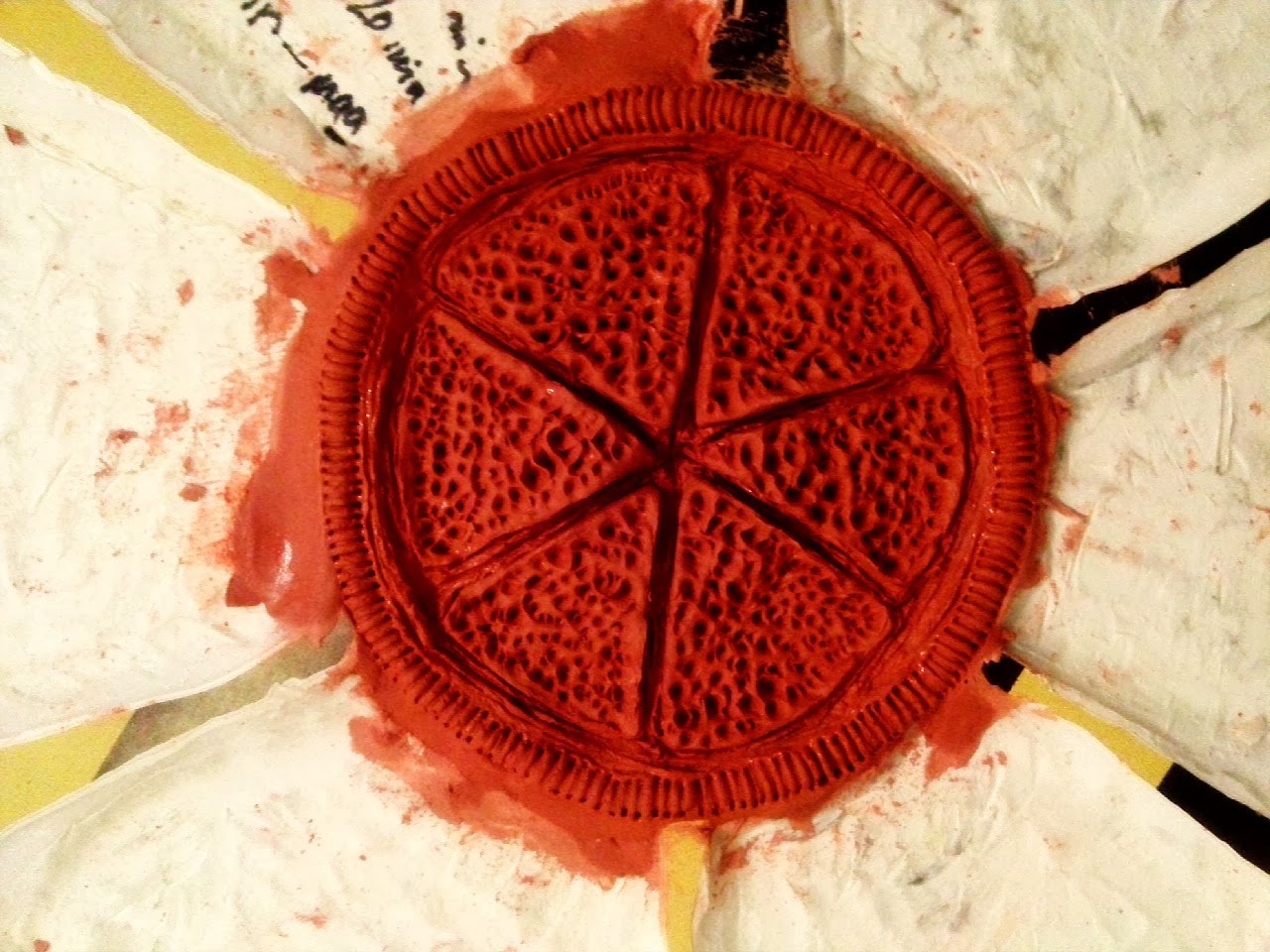 And the whole pad. When this dried the foamboard started to warp so I will have to weight this down when the next set of clay goes on. There will be even more used and most likely make the whole base much damper. 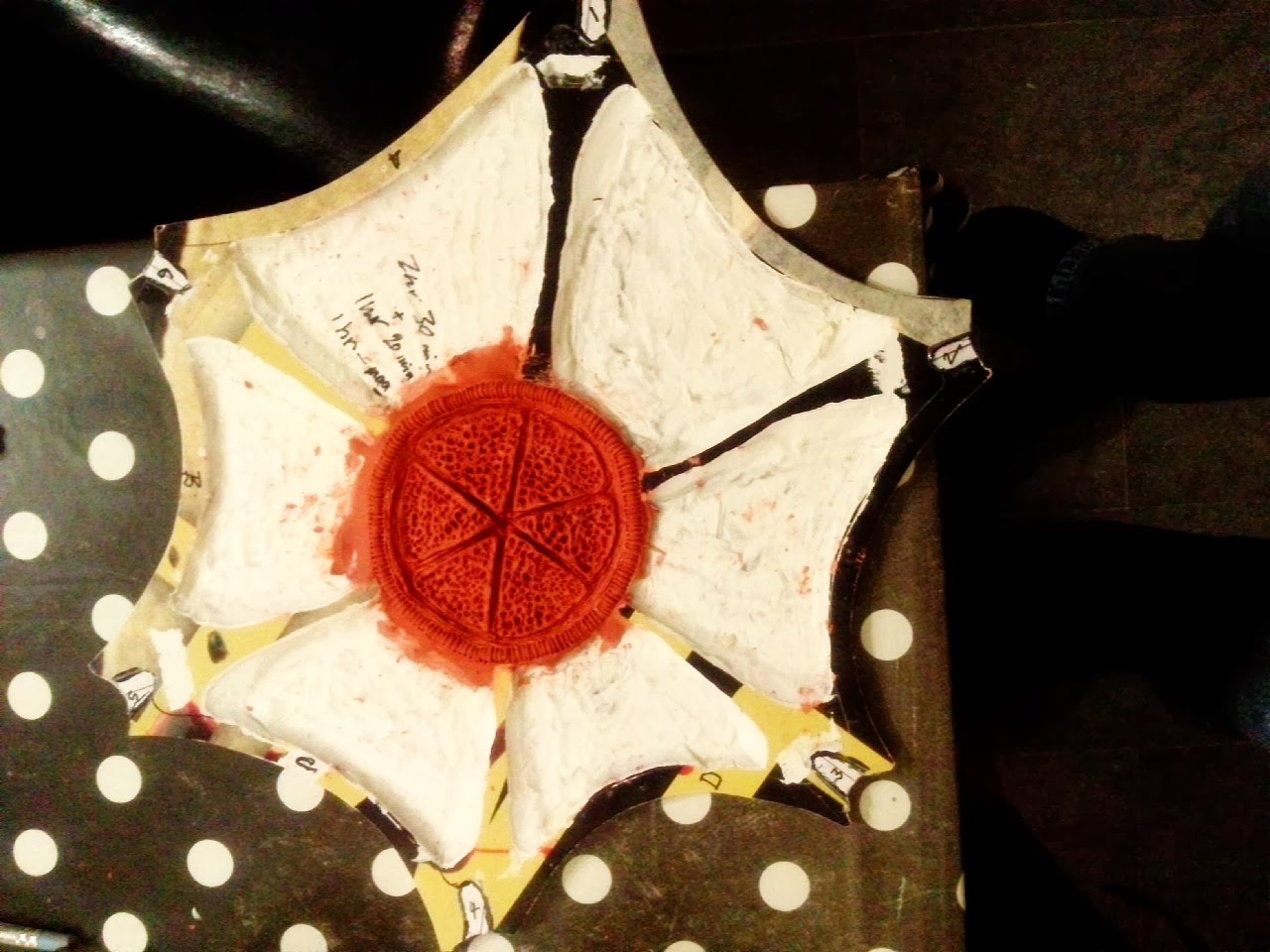 I started some of my shield wall tests. Quick frames of sprue, I'd be happier if they were curved but they tend to snap so I'll dry run the process. I know the plan was melt plastic but I tried these ideas first, although these pics are before the attmepts dried. PVA on cling film - didn't work, not strong enough and looks rubbish. 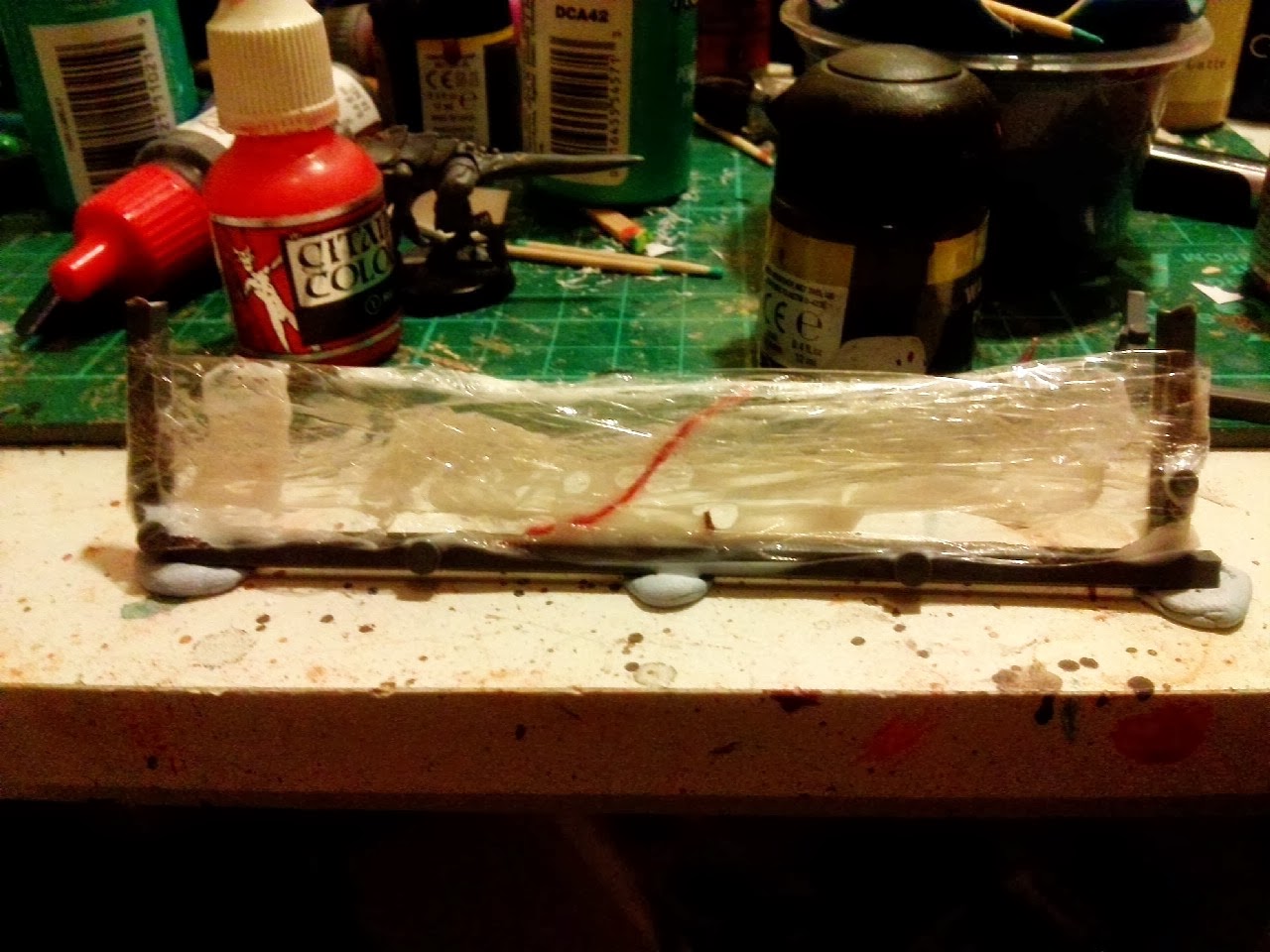 PVA on tissue. It's actually OK, not ideal but if everything else fails I may consider it. The end result isn't very durable but it might look all right after painting. The red thread is to add some 3D veins inside the membrane. Cling film and Vernidas Gloss Varnish. I really thought this would set rock hard but it hasn't. It's just like cling film stuck on plastic sprue, which to be fair is what the PVA and cling film looks like. so another fail. 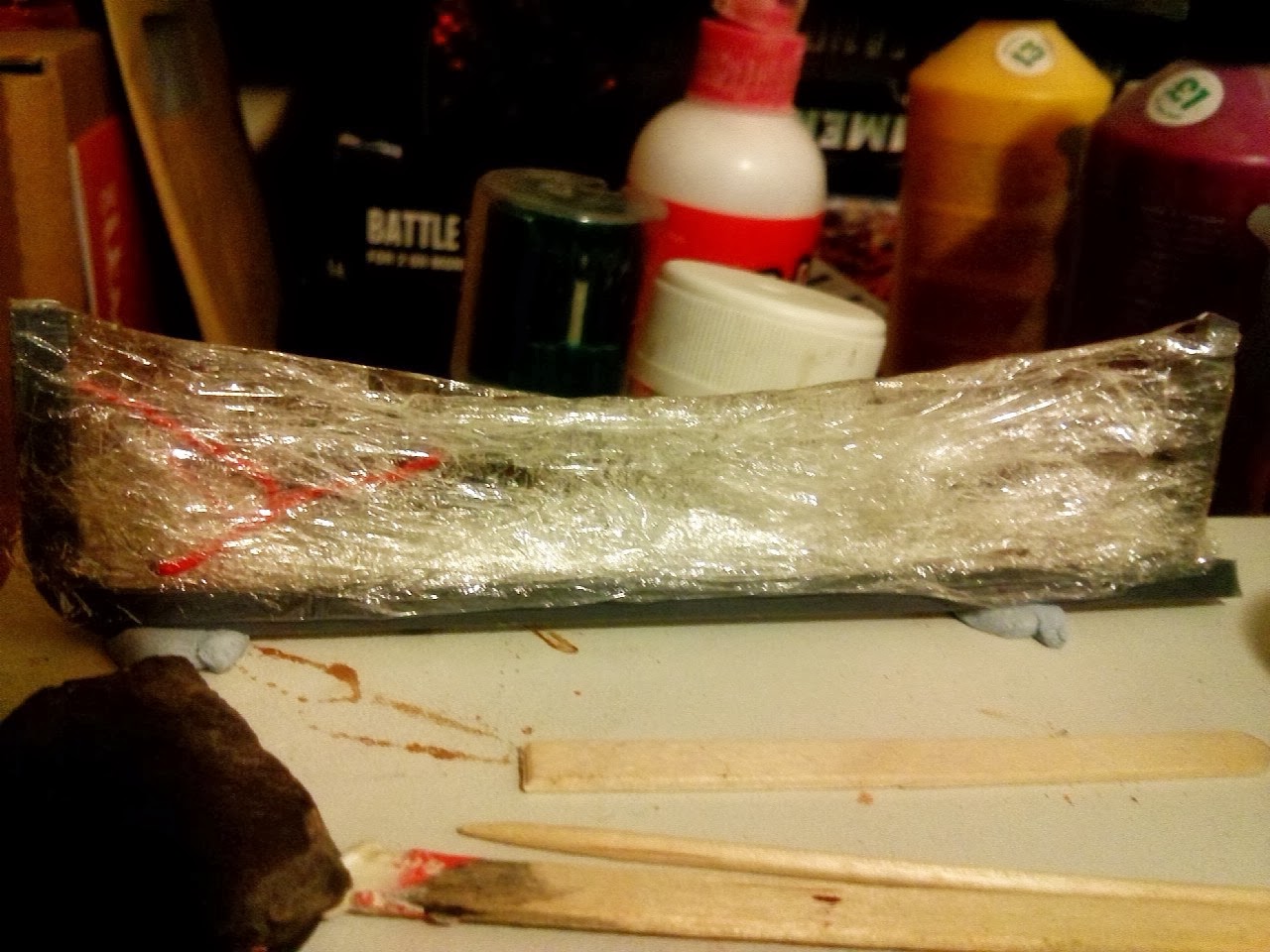 So probably another hour or hour and a half on this. Losing track of time now, sorry.

And here's your second update and the lengths I've had to go to to ensure the pad doesn't warp. There's even a CD under the pad to hold it in a convex position to counteract the concave nature of the centre warp. 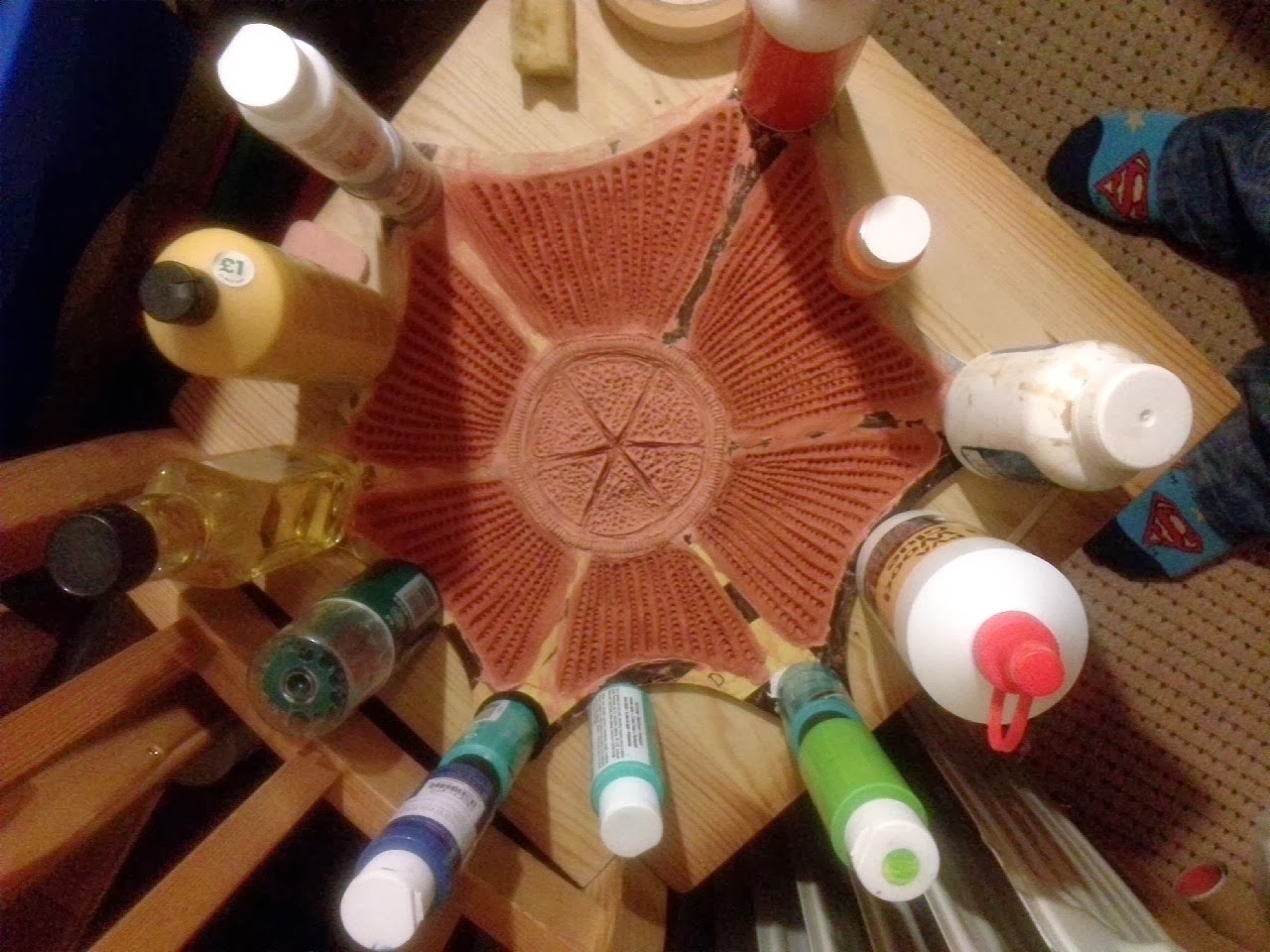 Next up stretched muscle fibres along the six 'webs' but I'll leave it a few days to dry thoroughly before I mess about with it again. I've also got to ensure the tower slots don't get any clay on by sculpting around the areas they sit - very fussy.