My first post on these was September 11th 2011, but as I don't recall if I'd already posted about them I may well have been working on them for months prior. Suffice to say after about 2.5 years I'm more than a little relieved to finally painting my first ever Dark Angel Tactical Squad. 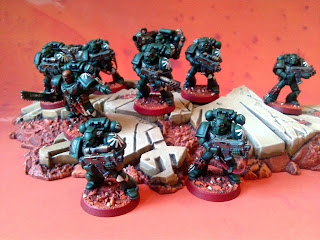 I've finished them up with freehand Dark Angel symbols, pencilled in first and then painted Vallejo Stonewall Grey followed by some highlights in white. 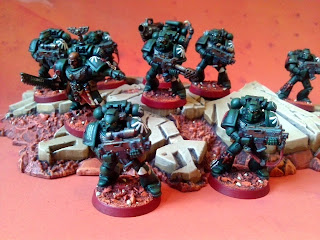 The green is something I'm happy with, not overly highlighted, still dark in places and still obviously green in places. Thankfully these pics aren't too saturated but I think they give a decent enough representation of their true colours. 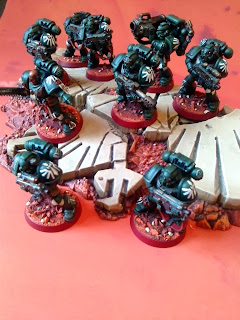 The symbols aren't spectacular but they're not bad, certainly they weren't as difficult as I expected and there isn't one that looks awful even if there are slight differentiations between the lengths of the wings on the swords. But I like that, it gives them some variety. You can also see some litanies written on to the armour. I've some awesome fluff yo go with this and why all their weapons are tarnished. When I get chance I'll tell you the tale of the 'Shards of Caliban'. 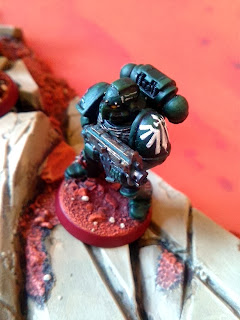 The Sergeant is perhaps my least favourite model. I wanted him dark skinned and I think it almost works but his eyes are a bit odd. 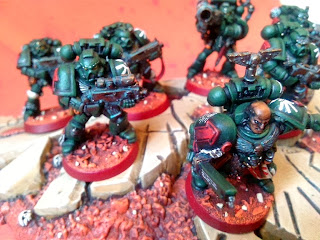 And the red Dark Angel symbol on his tabbard just sucks, the folds dont help recognising the symbols but I couldn't think of anything else so it'll have to do. 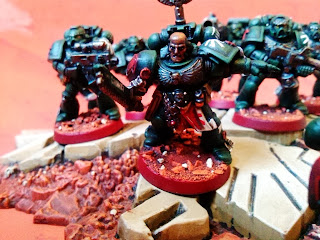 To help identify the two combat squads should I split them I put litanies on the left vent on five marines. I'd actually put quite a lot of 'text' already on the power armour and feel this may have been a bit too far but I did have fun making some strange 'illuminated' characters and typography as if each marine has decorated his armour with an oath or message from one of the many teachings important to the Dark Angels. It ties in that vibe of a knightly order - warrior priests, versed in the art of scripture as well as fighting. 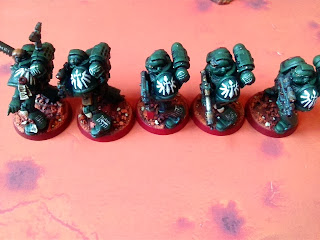 And Litanies on the right vent of the remaining five. The second from left has his litany in a spiral, to represent the Dark Angel obsession with such a shape. Don't know how they'll be perceived should I ever take them to Throne of Skulls. Not sure they'll stand out quite like my Tyranids do, even if they've been slaved over considerably more per model, we'll just have to see. 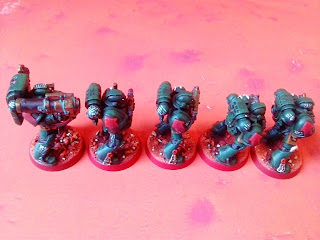 And here's there new home, a handy £2.49 craft box from Home Bargains. 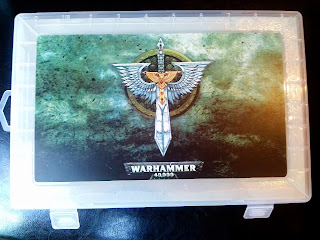 All decked out with laminate floor cushioning foam, stuck in with double sided tape. Unfortunately it only takes 18 models, just short of two tactical squads :( Still, better than nothing. 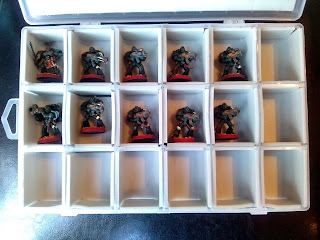 Here's my big blue tick, for getting it done. Finally some Dark Angels in the bag a momentous occasion!