A week or so ago I saw an ebay bargain to die for. A near complete set of 1st Edition Epic Space Marine for £28 Buy it Now! I couldn't believe it, more importantly I could justify getting it, not with a number of gaming purchases already made and a new tyre for the Micra due. But PeteB can see a bargain and snapped it up and he got even more than he bargained for with a bundle of extra miniatures - Orks, their battlewagons and the Space Marines that included bikes, Land Speeders, Terminators, Assault and Devastator units. I think he'd probably recoup a third of his outlay by selling the Orks but we'll see.

With a new game in hand we decided to have a knockaround, we'd spent 2 hours just gassing about the game and I showed off my old copy of Rogue Trader and we giggled. Anyway, we went simple, a Warlord and Warhound each [I swapped around the weapons so PeteB had the plasma and I had the las so we could experience the other side. 3 Barrels on each and Chainfists I also had a Multi-launcher and PeteB had and auto-cannon]. We also had 6 Land Raiders each, and two stand of Devastators, Tactical and Assault troops. 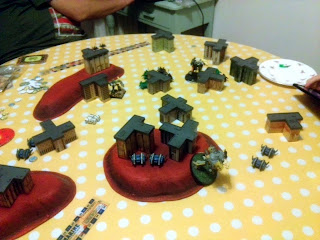 This is after turn 1 [although my Warhound needs to move]. I was trying to flank with my Land Raiders, it's worked on the left but the right is very exposed. 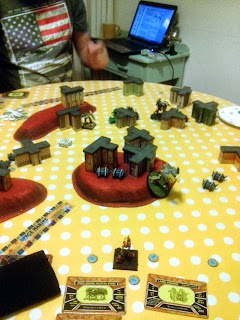 My assault marines jump behind the Warhound. 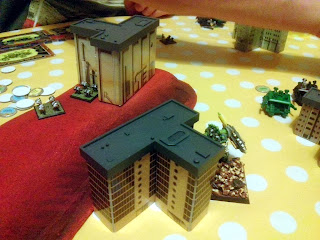 More of PeteB's infantry disembark and the Land Raiders position to shoot. 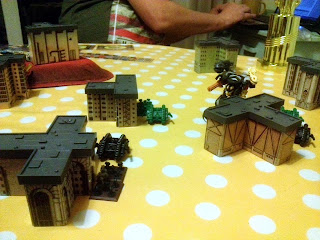 His Warhound goes to stomp on the Assault Squad, missing one. 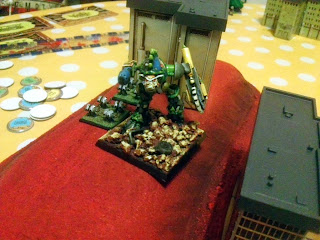 But then as he passes he uses his head mounted Heavy Bolter and Plasma Gun to kill one the other. 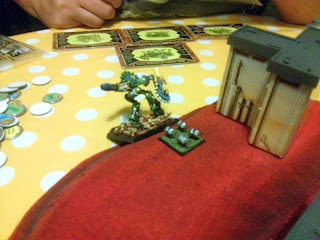 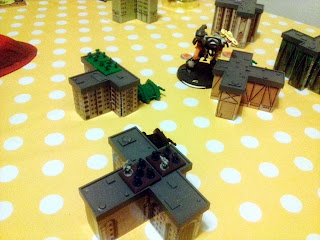 I manage to blow the Auto cannon off his Warlord Titan with my own. 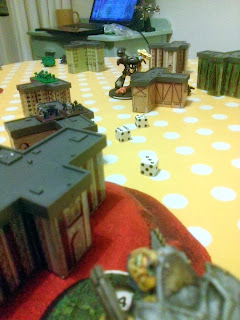 The building occupied by the Tactical squad takes two damage from my Land Raiders. 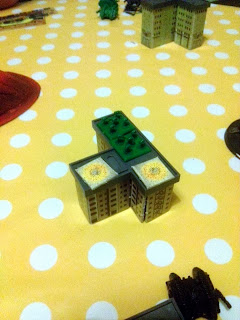 The building PeteB's Warlord was taking cover from is destroyed leaving it exposed. 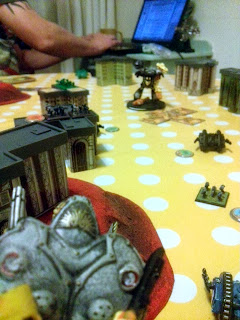 But his Titan manages to get a Plasma Cannon shot on the Warhound and two Land Raiders. Leaving the Warhound to stand above the molten slag of the Raiders. 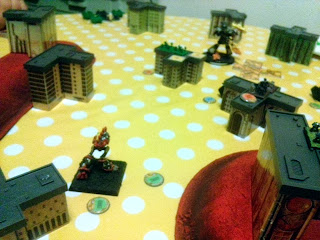 By this time it was getting late, I'm not sure who was winning and didn't really care to be honest. We'd had some real fun and it was a completely different tactical game. It eventually became apparent PeteB had missed the bit where I said all the weapons on the Titan had 3 barrels except the Plasma Cannon. He'd been firing only one shot whit his Heavy Plasma Gun. The Auto Cannon had gone quite early so it wasn't too bad but still, a fair few Land Raiders may have been destroyed other wise.

We're going to be playing this again next week but I'll be bringing my 2nd Edition rules and Expansion so we can take some more interesting models and see what does what.