With Turn 2 complete we get some Victory Points and 2 new Strategic Assets. Liam and Ben had 2Vps I think, 1 for an objective and 1 for killing Nancy. We only managed 1VP for securing the chapel on the hill, everything else was contested. We then spent that VP in reanimating Nancy and then used a Strategic Asset to bring her on on Liam and Ben's table edge, as you can see she had an immediate effect blowing up one of the Super Heavies KABOOM! Not sure what the other Asset was. 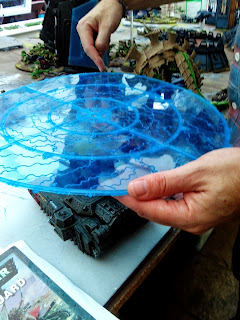 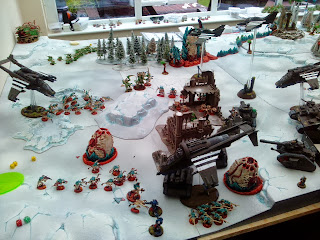 The remaining MCs headed up the middle hoping to get to grips with the Super Heavies, my Hive Guard do little. 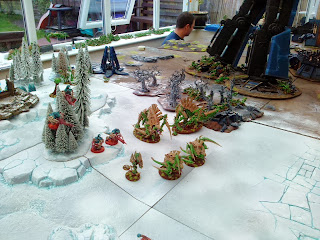 With all but four of the Hormagaunts getting in to assault the Vendetta was doomed and glanced to pieces. 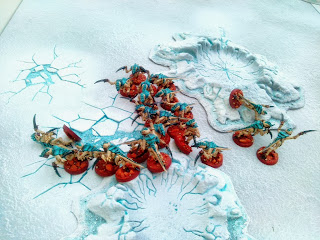 Stealers multi-assaulted the last two Terminators so we could 'sling-shot' off with consolidation moves. 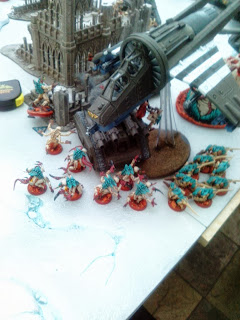 Another Legion of the Damned was killed by Devgaunts and Tyranid Warrior fire and the remaining Stealers headed for Pask in his Leman Russ. 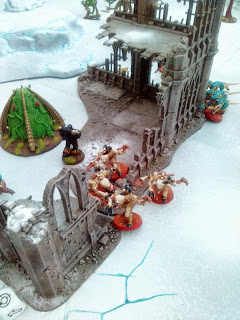 NOT Lysander continued to smash through his attackers, being the only one left of his squad but surrounded by the chittering green horde. 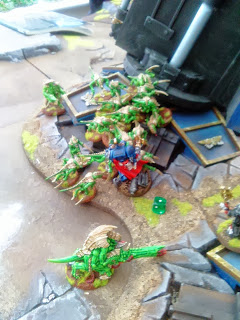 The Devastators, who had felt so secure in their vantage point on the far left flank were suddenly horrified as a Lictor suddenly appeared within their midst. All this time it had been watching their every move and punced ready to attack [and was probably shot to ribbons in the next turn, ha, ha!] 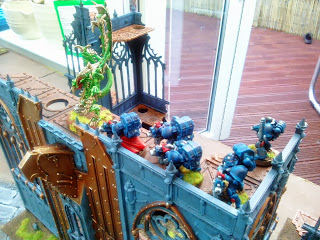 Ben and Liam's turn and they've Strategic Assets galore. In comes a D-weapon on the Swarmlord Death Star. If this hits, bye-bye warlord. Even the Iron Arm, Endurance and Cover Saves will be for nought. 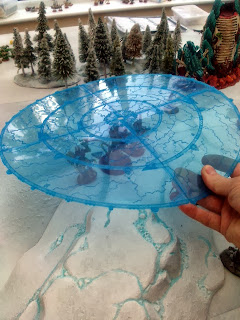 Luckily, the blast deviated meaning the VP spent resulted in just one wound on the Tyrant Guard. Ha, ha! That was funny as opposed to utterly depressing! 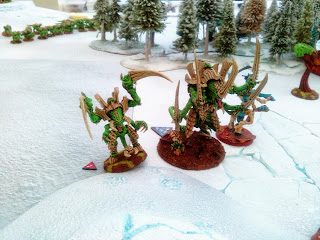 The Terminator Captain and Chaplain finally put down the Genestealer on the right Titan foot, securing that objective. 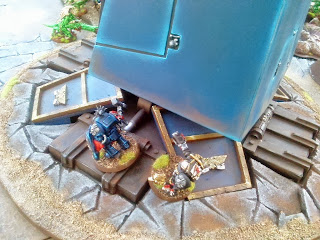 Another VP was spent and a Baneblade rumbled onto the my flank, suddenly all my remaining nids were painfully exposed. 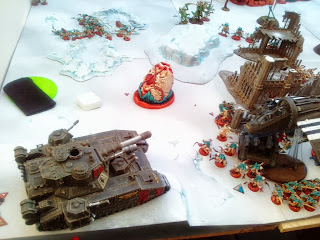 Trapped between the Bane Blade and the Stormlord, things were looking bleak. Meanwhile the Vulture peeled off to target the Hormagaunts. 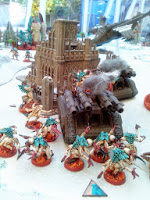 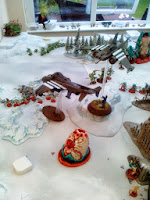 Lightning and Vendetta zoomed over to the Chapel to secure the objective. 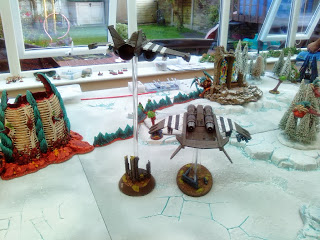 While the remaining Lightning joined the Vulture in ruling the skies over my flank. 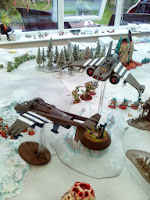 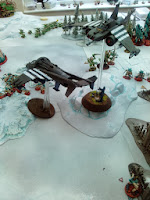 My Stealers were destroyed, probably by the Ogryns and Stormlord. The last Legion of the Damned member managed to kill two of the remaining Devgaunts leaving 1 to contest. 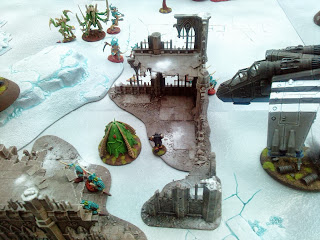 The Vulture was clearly less than successful in taking out the Hormagaunts. Only removing about 5 or 6. 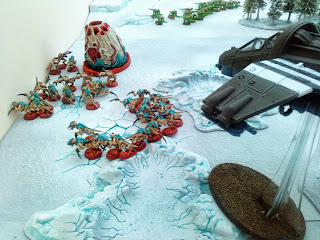 The Baneblade was intent on destroying the Broodlord but he was just as lucky as his twin in Look Out Sir and cover saves rolls. He ended up with 1 wound remaining. 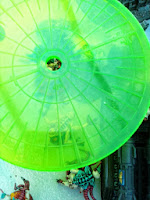 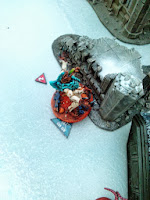 And then finally succumbed, but it took almost everything Ben had to take him out. Well, everything except and Apocalypse Template that took care of the remaining Ymgarls. 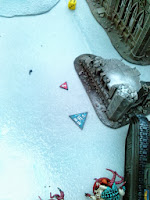 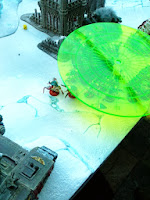 At this point I goaded Ben into assaulting the last Devgaunt with his Damned Astartes, he jokingly said he'd probably die in overwatch, to which I managed to hit him once and then wound he promptly failed his saving throw, which I thought was hilarious. I suddenly remembered the gaunt had to do it's morale check, which it failed but assuming Ben had still assaulted the result would have been the same. 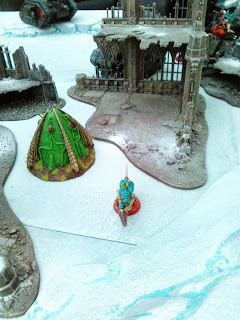 The Warhound and Shadowsword were quite happy to pound away on my rapidly diminishing forces. 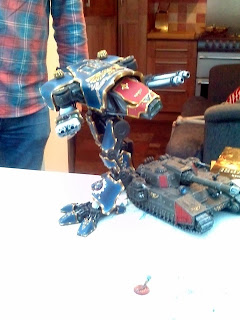 The Swarmlord's Deathstar cohorts were splattered into oblivion, which ultimately led to his demise too. Another VP to the 'good' guys for killing our Warlord. 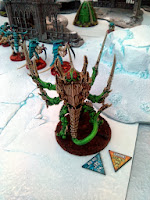 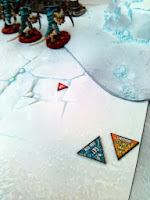 More of my Warriors were incinerated. 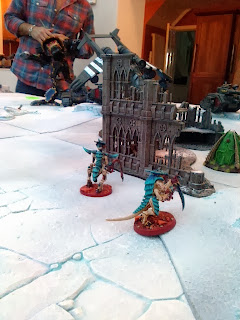 Anyway, turn 4 next and we see if there are anymore VPs to come our way?
Posted by 40kaddict at 12:01