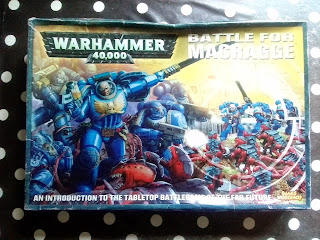 I recently had the fortune to secure a near complete Battle for Macragge on ebay for a little over £14 all in! I never got 4th edition, actually I only ever got Rogue Trader and I think I was hobby sober shortly after 2nd came out, so it's nice to have something to close the gap. 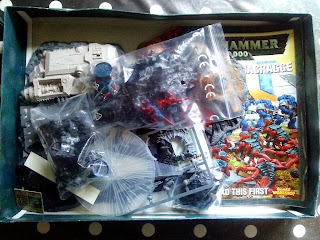 The thing that impresses me is there is terrain and having skimmed through the rule book the terrain features in all of the scenarios. Sure there are less figures than in the current box set but I think that's a shame. I think a big regret is the lost opportunity GW had to bundle a terrain mat in their box like they did with Dreadfleet. 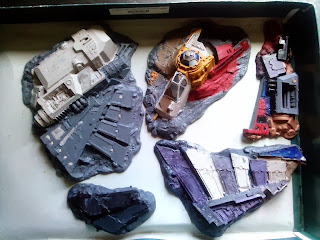 For my £14 I got the terrain, the blast templates, dice and even transfers as well as the rule book. 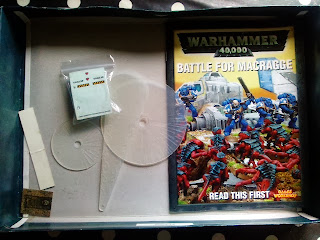 I got all 10 Termagants [always handy] and five of the Genestealers and one old skool original Space Hulk stealer to make the 6th. It also had the hive nodes and spores mines too. I'm definitely going to make some more Ymgarls just for variety but these were just bonus items for me. I wanted Tyranids for sure, but I promised myself I should be purchasing Marines. 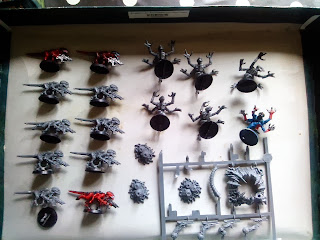 And here's ten of them, the only problem is the pale grey guy on the bottom right, who is a 2nd Edition kitbash. Still I had a spare Marine come with the Land Speeder I also got off ebay recently. So this diminutive marine will be given to my youngest to paint. My only other opinion of note is that the moulding on them is quite bad in places with mis-register in the two halves. It shows how much their plastics have improved since 4th. Still, the sergeant is an awesome model and I look forward to adding some bits to make them less generic. 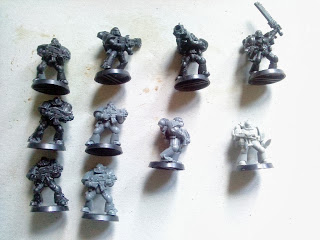 I also got the Aquila pilot, his teleport homer which is handy, the fuel cell and three of the four force field generators. All in all, £14 is an absolute steal for everything and I may well keep an eye out for this sort of collection again in the future. I don't think I'll get a bargain like this again but it's good to keep checking. 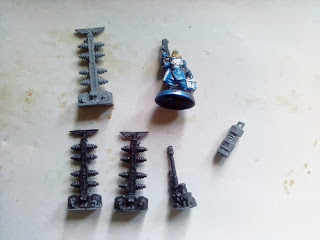 Anyway, I have plans for some of these items, the Tyranids in particular. I don't want to be purchasing anymore nids but if I can pick some up for buttons then I will. We'll see what I can add to this in the next few months, it's a fun idea I have ;)
Posted by 40kaddict at 12:29