Our turn 4 and Nancy was suitably miffed at the loss of the Swarmlord and trained her guns on the Warhound which had just suffered a glancing hit from one of my Hive Guard! 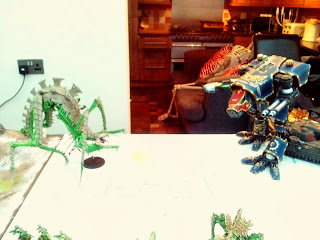 This is 're-creation' of the dice roll Otty quickly whipped off the table in excitement. It surely looks like the Warhound was wounded badly but is still in later pics so I guess she didn't die, just yet! 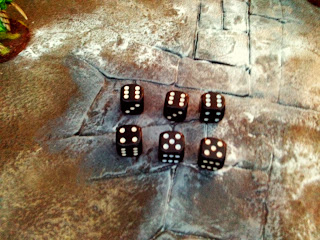 The Hormagaunts are routing all the way back now with little hope of me regrouping. Otty's mishapped Devgaunts are nearly out of the deployment zone - sodding Synapse and run moves. My Tervigon is starting the dash across the frozen wastes... 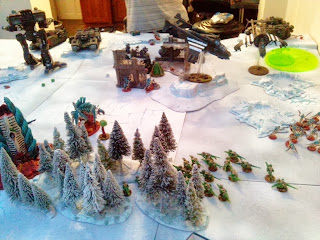 Only to get splatted, probably by the Shadowsword given how smug it looks immediately opposite. 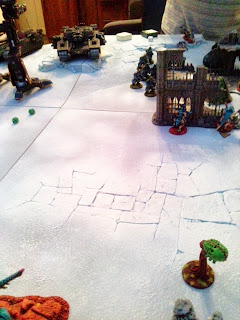 The Vulture culls even more of the fleeing Hormagaunts. 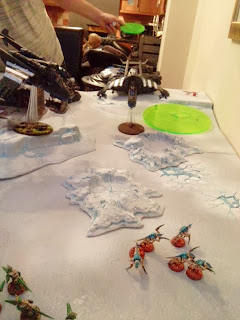 And with targets running out everywhere why not drop an Apocalypse blasts on those devgaunts who've done nothing all game? Yep, thats around 8 dead. 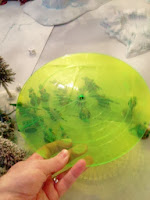 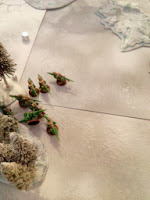 I think this is now our Turn 5 as Nancy takes another crack at the Warhound. 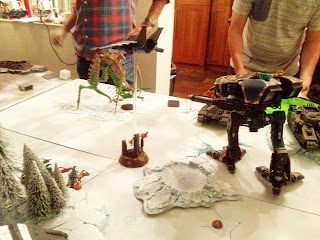 And she finally bites the dust getting us a VP! 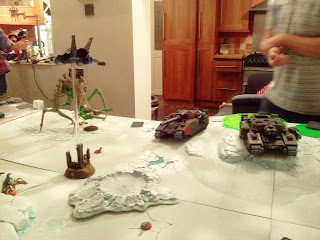 The remaining Hormagaunts head for the hills and I move what's left of the Devgaunts forward. 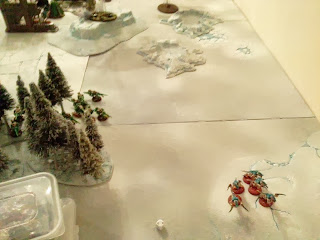 Meanwhile my Tervigon is still holding the Chapel, with her 5 spawnedTermagants waiting in cover to steal the objective should she fall. 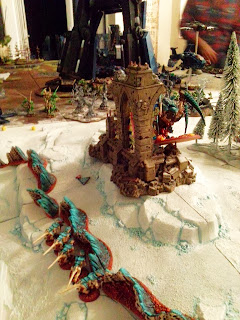 The Warriors finally make it to the objective but there's a busload of Ogryns the other side of that wall and I just don't think the Prime and a Warrior with only one wound is going to survive their ripper guns let alone an assault. 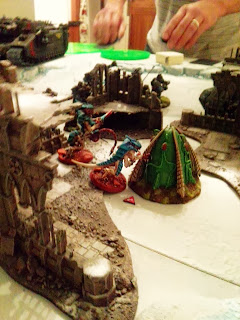 Nancy slams into the Shadowsword and I think she ultimately smashes it to pieces like tin foil! 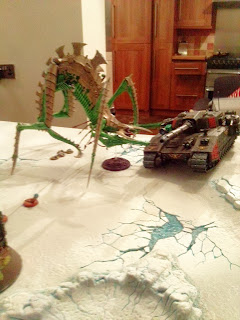 The vanilla Tervigon gets prioritzed for termination by whatever Imperial weaponry is available. 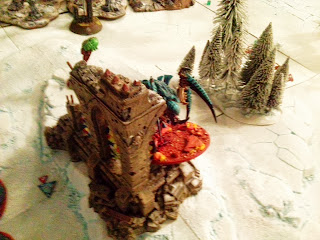 And ultimately her fate is sealed... 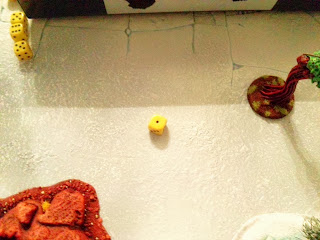 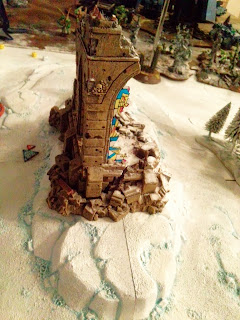 The Ogryns dutifully wipe out the Warriors and Prime, although I think the Prime might have offed Commissar Yarrick in a challenge as he doesn't seem to be with his crew. 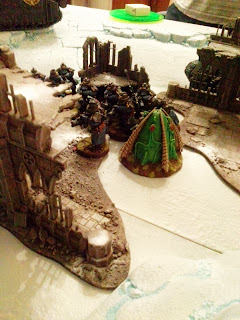 The Stormlord swivels to bring down Nancy 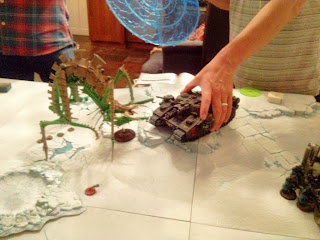 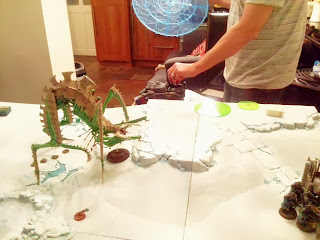 With only Otty's Devgaunts for me to move there was one last hope for redemption when an over eager Vendetta pilot closed in for the kill on the already fleeing Hormagaunts, thus allowing the Devgaunts to reposition for a rear-armour shot. Here's my first 11/21 snap fire shots. Sadly I only got one more 6 to hit and needed three 6s to glance it out of the sky. Sadly the bitter irony did not go my way and I could only manage 1 glance and the flyer escaped. 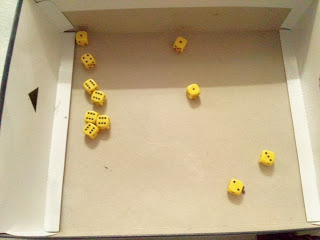 The Termagants managed to pass their Instinctive behaviour and capture the Chapel once more. 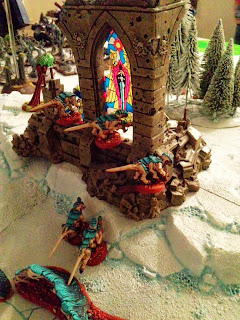 Only to have it snatched away by the contesting Vulture, he probably shot them all too, to capture it back for the Imperium 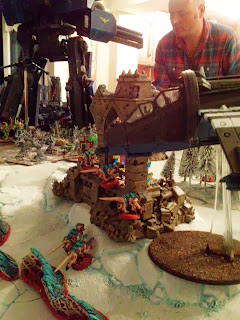 And that was the end of the game, with I think the final score being something like 19 to 3. So it was an absolute whitewash, although in that last turn Nancy was an absolute beast ripping through the three Super Heavies like they were never going to be a problem. This was a fun game though, it was more like a big 40k game for me as I didn't have any Apocalypse beasts under my control but pretty much everything I wanted to do with my deep strikes delivered. I think I should have committed the CC Tervigon sooner, it did nothing all game and neither did the Swarmlord. But we were terrified he was going to be killed first turn.

The BIG problem with Apocalypse is the scale of it, with so much to move and the amount of time it's such a shame that you have an hour+ of killing where you just totally hammer your opponents only to then be on the receiving end yourself for an hour+ too. It can be too much of a up, down, up, down scenario. Also you really need the Apocalypse creatures/tanks to stand a chance. I'm not sure what my 4000pts could have done to those Super Heavies, maybe they should have been a priority instead of the Manticores but I think Smash attacks would have been needed by MCs and I'm not sure any got chance to do that with easier targets in the way anyway. Then again Otty was stuffed by a drop pod capturing an objective and he didn't have anything nearby strong enough to even glance the thing let alone penetrate it.

And once you start getting the extra VPs for controlling objectives in turn 4 there was just no coming back for us. Luckily 3 of the VPs spent by Ben and Liam were pretty ineffective otherwise we'd be looking at an even worse score line.

We'll definitely do this again, although we may have to tinker again with the rules to see how the playing field can be levelled. Clearly letting us go first helped a bit but then again Nancy was brutal when she finally got her a$$ in gear. A great game all round.

Lastly here's a shot of Liam's scratchbuilt Contemptor Dreadnought, not bad for a Bucks Fizz plastic cork, plastic lids, caps and other bitz! 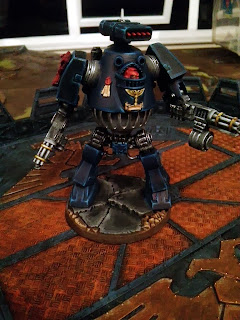 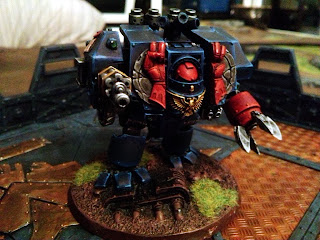 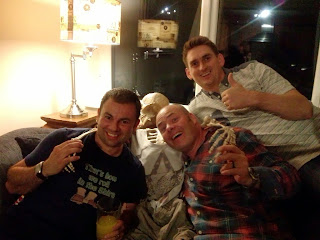 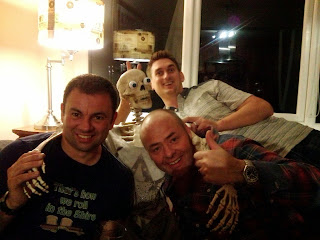