Dear Lord, nearly two years since I had something of worth to show on these guys and sadly that's had an effect on them. Since last time I added the weapons and coated them with Badab Black to try and tone the green down but I just can't accept that as their 'finished' look. In no way does a black washed base coat represent the quality I was hoping for, hence the hiatus. The downside is all the nooks and crannies are now coated with dust but hopefully I can cover that up.

In the mean time the solution to my problems with green was solved with a recent trip to GW where I asked if I could try out their new Dark Angels Green - Caliban Green and a young lad who was gaming offered to lend me his own paint to try out +1 to the community there [although the manager was also keen to offer too]. Anyway, I tried it and was impressed enough to purchase a pot there and then. So far the guys below have just had their helms 'updated'. 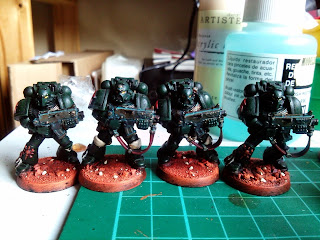 However, these guys are fully Caliban Greened. It actually works like paint should, unlike my Vallejo equivalent. Application of water thins it sufficiently to blend on the model and although I seem to be randomly making up where the highlights would hit I don't mind so much because this initial finish is something I'm happy with. 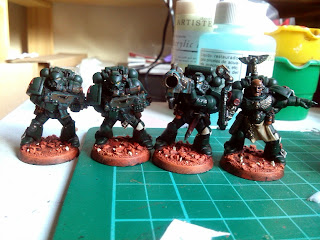 You will also note I've added some Verdigris to the bronze bits. I know I was really happy with what I'd done previously and it kind of doesn't make sense - why would the Marines allow their weapons to become weathered and certainly not on the arid landscape of of Ferron Proxima? But the 40k universe is awash with anachronism and ungents used to placate machine spirits. Why wouldn't these warrior monks also revere the aged patina of their venerable weapons? They're totally clean on the inside for functionality, just ancient on the outside. At least it'll tie them in with the Deathwing. 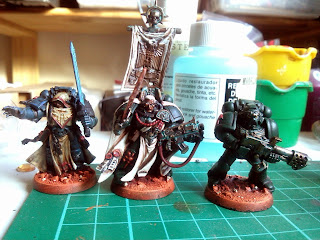 This guy was my initial test model of Caliban Green and has actually had a set of extra highlights added that resulted in my happiness and continued progress with the rest of the squad. I then went back again with Badab Black/Army Painter Hard Tone and washed all the darker areas to bring back the effect I wanted and cover up the dust. There's definitely a richness now, I hope it comes across as I realised that it takes a while to do but that's OK. If a model takes three times longer than a Termagant, that makes sense as they're worth three times more. 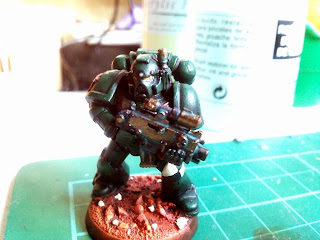 I obviously did all the bases and will probably do all the bases on the Dark Vengeance squad immediately after base coating so everything can be tidy. Additionally there's the freehand Chapter badge which is something to look forward to [NOT!] and I'll pick out a number of other details as well as trying to achieve a decent lens effect on the sniper scopes. 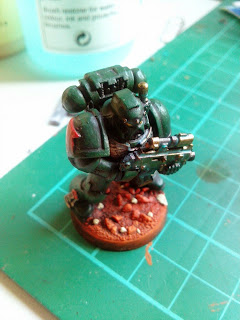