The original plan for the capillary towers involved an empty bottle of Dove Shampoo that was quite tall which would be coated with Milliput but for some reason I'd recycled most of them a few weeks ago. Ultimately I was left with one option - a standard 2litre pop bottle. I used the upper and part of the cylindrical bit for the battlements and split the base into it's five 'petals' and trimmed and overlapped them up the tower. 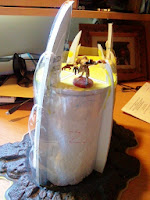 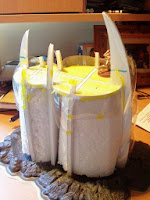 Even with some heavy duty scissors you can only go so far in the base plastic as it's the thickest part. By cutting each petal out as thick as possible you then have five shapes that you can trim down so each is smaller than the nxt and that way they can 'grow' as they get further up the tower. I used mostly dress maker pins to hold it in place with some small points of hot melt glue because...

It turns out the heat of the hot melt glue can be enough to melt the plastic! You can just make out on the picture below, to the left of the middle spire, that was pinned back into place, just above that cut line you can clearly see the foamboard for the roof. This is because the plastic is melted back to that just visible white reflection then the glob of yellow glue. It doesn't matter if you can't make it out, it's there and it's an issue, particularly when you cut the battlements to fit and then they 'shrink' back from the heat, be warned [also that glue is super hot to the touch, even after application but somehow cools instantly as it burns your skin!]. 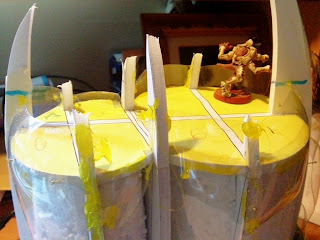 Another melting area, just to the leftt side of the cross-member on the right, you can see the yellow glue curves away from the foamboard as the plastic receded. Also a genestealer for scale. 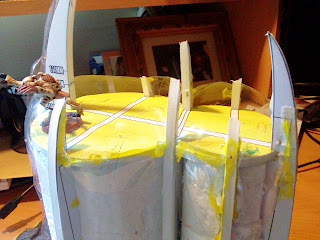 This is 15 models on the battlements, can't imagine Termagants being as forgiving and there's still scultping material to add. So long as I can fit 10 or 4-5 warriors I should be alright. I'm hoping more to be inside the building and using the fire points, not exposed on the roof. 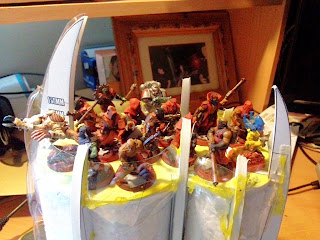 The second main capillary tower and the two lateral towers get their pop bottle Chitinous plates. I also cut out some of the foamboard for where the door is going to be on the left. 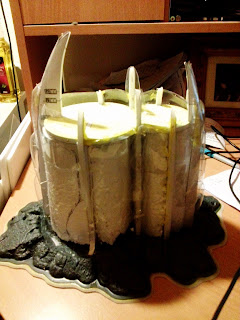 Perhaps if I'd had some coloured bottles these would be easier to make out but hopefully the addition of grouting will strengthen and reveal the structure in it's entirety. It's surprising how quickly it seems to be filling out, hence why I've begun to focus primarily on this project ahead of the others. 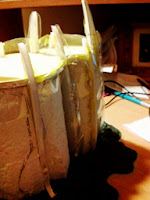 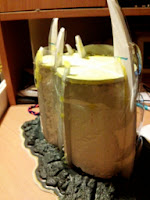 Next up, lets 'ice this cake!'