In my head I'm still trying to work out which bits need to be done first, what materials will be used to make them and the best approach to take. It's not quite the tapered structure I was aiming for, although the capillary towers do create that effect although the actual Bastion itself is quite linear. Anyway, its a best guess situation at this stage and the next 'guess' was to sand the grouting down. Whatever pattern/texture/effect I'm going to do on the walls the grout is too rough to guarantee an applicaiton I'm comfortable with. Trust my luck to sculpt through some clay only to hit a spike of grout. So I bought some sponge sanding pads to shave this baby down. 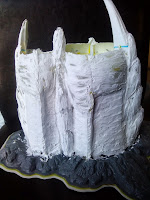 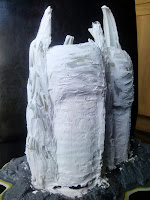 After about 30 seconds, I got bored, picked up the Dremmel and found a sanding attachment and safety goggles [should have worn a filter mask too as I was coughing a bit later on] and then sanded this mother. A lot of care must be taken not to sand through the pop bottle core on the battlements, where the plastic was thinnest, but on the capillary towers it was much more forgiving. 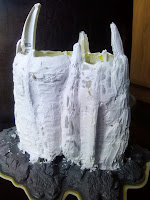 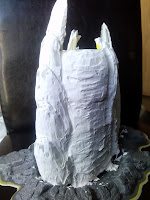 I've been having quite a debate with myself on the issues of this non-imperial bastion and how closely it should follow the template from the standard model. In some respect I've already gone off-piste with an oblong design instead of square/circular. This could be construed as 'modelling for advantage' as I can create a wider LoS blocking piece of terrain. Of course it's really modelling to fit the crater so I can argue the case for that, however I actually read the rules for buildings for the first time properly and discovered a Bastion is classed as a 'medium sized building' which outside of the Bastion rules could be any building measuring up to 9"x9", which is quite a footprint. My Bastion is currently measuring in at roughly 8.5"x4.5", considerably less so again I think I can contend with any debate.

The other issue is weapons and firing ports. Now the standard Bastion has an emplaced Heavy Bolter at each compass point. Much as it pains me with my design I will be following this with a bolter asymetrically placed North and South i.e. North in the left tower and south in the right tower [the one not with the door]. the East and West ones are a bit more ungainly as they will have to but alongside the Capillary tower ends. The only alternative is to this would be to have two facing North and two South but I can't justify this 'broadside' configuration given the advantages this might bring so N, S, E and W it is.

Fire points will also be an issue as they should follow the compass points two with 7 vantage points in total. However there's just no way I can design this thing for them to fit that way so I will will have four on the north facing [in the original design below I was going to have 5 but given the advantages and the fact they just won't fit the design I dropped it to 4] and two on the South facing. Ultimately every list I make that will include the Bastion will also have a 75pt alternative option that I will smiling swap out should my opponent be concerned [at which point I will happily name and shame their a$$e$ on my blog! Ha, ha!] Once again the solution to fitting this all into my head so I have a mental picture of what I'm doing is to do an actual picture: 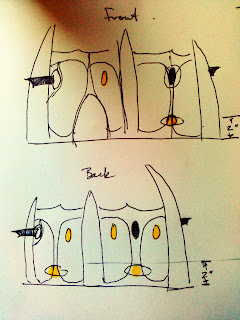 With the grout sanded down I then marked on the sketch drawing. this gives me exactly where I need to make allowances for fire points and chitin plates for the sculpting. 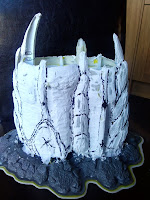 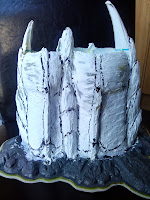 I also sanded and gouged out areas for the node points to be fire points and used the Dremmel to gut out the slots for the 'heavy bolters'. 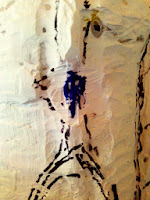 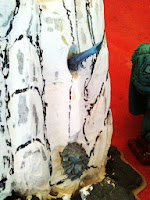 Each node point was sanded to try and fit the area and surface it was attaching too, hence why they're all colour coded so I put the correct node on the correct spot. 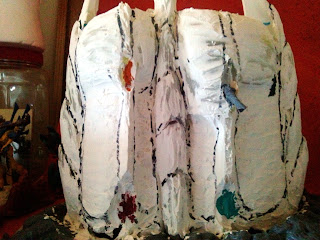 With the nodes in situ it looks like I have quite the broadside. I may suggest that the top-right node only fires towards the right [western] side that way there are still only 3 fire points on this facing, which is the Imperial standard. In fact I'll probably create a little diagram once it's complete so I can pass it to my opponent before a game so they can be clear what each fire arc is. 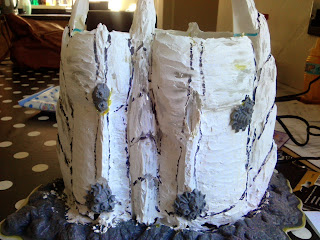 Not sure how I'm going to fit the fleshy growth areas around the door, I'm running out of space inside the crater but we'll see where we're at after the sculpting goes on. I think I'll go with DAS air drying clay as I've more of it, it's cheaper and doesn't require me t mix it beforehand like Milliput. It'll be less durable but if anything gets damaged I can always use it as battle damage, I just hope it's as easy to model with as Milliput. 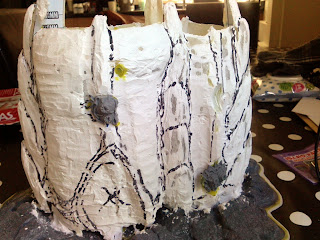