So I've iced my cake! Well, covered it in tile adhesive/grout. It was a cheap pot from a £1 store, I used about 2/3rds of it and applied it with a plastic spoon. it's not quite as tapered as I'd envisaged but I'm not worrying too much about that. I am worrying that it is slightly bigger than I planned, I probably should have done just the single tower regardless of the rooftop area. 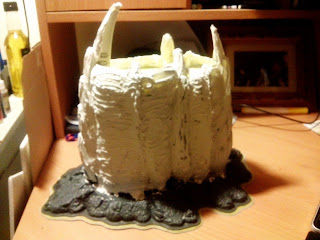 As it is this represents quite a large piece of Line of Sight blocking terrain. I can definetely hide more behind it than a standard Bastion. I may have to position it obliquely so the opponents view is still a wdithe equivalent to a standard Bastion. I made sure I isolated each chitin plate so I could still take benefit from the pop bottle shapes. 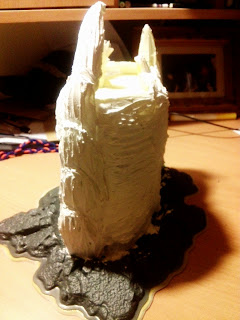 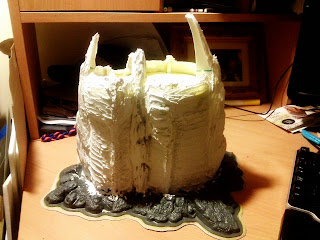 Next up I need to sand the grout ridges down a bit so whatever sculpting I do isn't interfered with. However, there is an 'organic termite-mound' look to it already and should you be nervous about your ability you could stop here and try and paint the beggar. 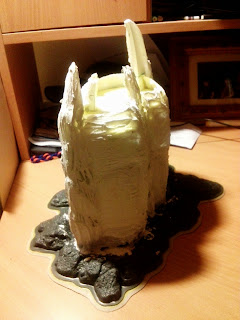 However, there are no fire points or emplaced weapon slots. I'll be representing the fire points with the ever-useful Tyranid node points. I managed to win an ebay auction with 11 of these for £2.19! So there'll be a couple left over.