For those that blog we primarily made some form of commitment with ourselves. To record our efforts and share those with others. Initially that's a shot in the dark, starting something with no audience and hoping one day to have a follower, some traffic and even just one person saying - "hey I dig your stuff" which makes us all warm and gooey inside.

Over time we'll join other blogger groups and one day one of the bigger boys might share what you're doing on their blog and suddenly it looks like the Imperium turned up on your blog because your 'hits' just went through the roof. Sadly some of the big kids have taken a break which leaves us 'middle-schoolers' [thats a fair assessment of this blog I think] to try and help out the new kids.

If I'm honest that's not going to bring a massive crowd to your fledgling site and whoever does turn up will be expecting to be entertained, informed and rewarded for their visit but we do what we can. 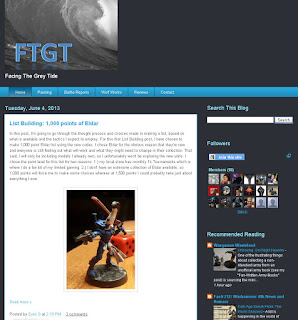 First up is Evan S and Facing The Grey Tide at http://ftgtgaming.blogspot.com, here's what he had to say


My most recent articles feature the new Eldar Codex with a review of the book and a battle report. I'm also hoping to finish up some of the STC terrain I got from you and show that off, with all due credit when I do.

So if you like my blog and my STC's then at some point you'll get to see someone else make some. 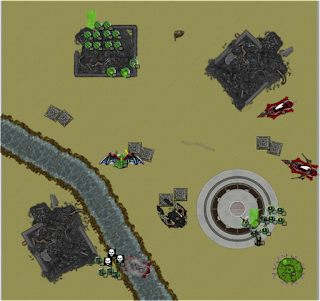 Something I particularly like are the battle reports which include pictures and accompanying text as standard but additionally there are top down diagrammatic maps of the action like the old White Dwarf reports. When I started doing reports I was going to do something similar, just less detailed but gave it up in the end as being too laborious. As I've said an average report can take a couple of hours to put together, a lot of respect to Evan for the diagrams, I'd imagine that's at least another hour on top of what I'd normally do.

So, nip over to Evan's Facing The Grey Tide at http://ftgtgaming.blogspot.com
Posted by 40kaddict at 12:29