So that was it, my five games and a whole lot of indigestion. Lets look at some of my units and how they fared:

Winged Hive Tyrant
Lets just say from the beginning I knew going in that he was going to be a potential liability. I was taking him more for the fact he was a newly finished model and a cool one to boot. I knew he had the potential to do well but equally fall at the first hurdle. The first two games he didn't survive past turn 2 but the last two games he actually was one of the key parts of my force that won [or nearly won] me the game. As for the third game, however bad it ended up he was probably the single most effective unit in play. I can't say I'd rely on him, he's still incredibly expensive and vulnerable but having a Deep Striking flyer is nothing to sniff at. 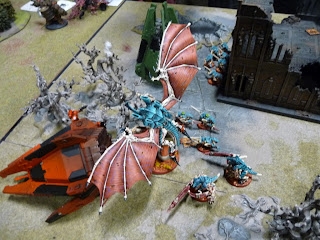 Tervigon
These really have become the workhorse of my army. I really should take on a third but I hated painting this one, there's just too much figure and I really don't want to be spending more money on the Tyranids or else I won't stop. Spawning was ridiculously poor and I even forgot to spawn in a couple of instances. It was certainly interesting to have both scoring Tervigons it makes them even more of an issue for the opponent when they're sat on an objective but I did miss out on an Outflanking Warlord Trait that was unnecessary on the Hive Tyrant but if I'd kept the Tervigon as a HQ could have been fun. Also I'm not 100% on all of the details in the battles on why they died but there seemed to be some combats they were unstoppable against tough opponents and yet others where they were whipped by seemingly inferior forces, c'est la vie. 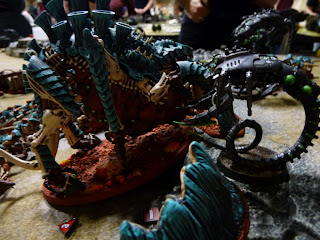 Termagants
Having a spare 10 gaunts was handy, that's for sure. Termagants as a whole did surprisingly well, those 15 killing two Wraiths in game 2 being a particular high-point. Also their tar-pitting ability is handy but I guess with a greater understanding of multiple charges I'll now have to be even more strategic so that I can still follow up with Tervigon support. As I say spawning wasn't great, which was a shame. 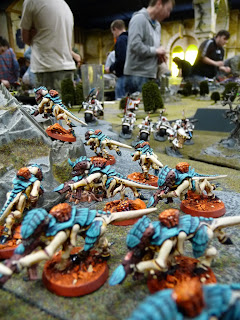 Devgaunts
Devgaunts were their usual dependable selves, my only disappointment being they were quite often picked off before they could bring their weapons to bear. However, even 4 or 5 remaining gaunts proved to be effective, it's just a shame I didn't have the other half to be even more deadly. Perhaps I'll look at a bigger brood at some point, or a couple of pods of them to get within range before being mullered. 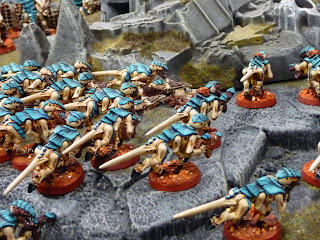 Broodlord and min Genestealer Brood
Didn't deliver much in game terms this time round. With only one brood there was less opportunity for them to shine and really their contribution was the added Biomancy power, hopefully picking up Endurance or Enfeeble but on a number of occasions lucking out with Witchfires. 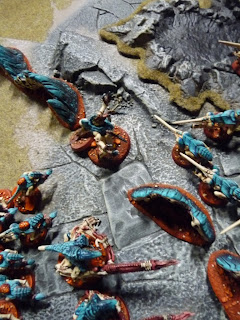 Hive Guard
The Hive Guard did admirably, they secured First Blood on a couple of occasions which probably was the difference between a win or a loss. I did mess up with my Defence Line positioning, not always putting it within 24" of my opponent which would have benefited their range. 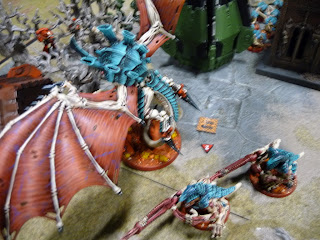 Doom of Malan'tai in Mycetic Spore
Not as unlucky on saving throws as normal but not as lucky as he could have been. The Doom is always a threat, Psychic Shriek is fun for that extra chance to kill people in the same fashion as Spirit Leech but with the added advantage of no cover saves. He had his moments of success and some moments where his only impact was to take a turns worth of shooting from anything nearby. Regardless, in these tournament environments I think he'll be a 'must take'. 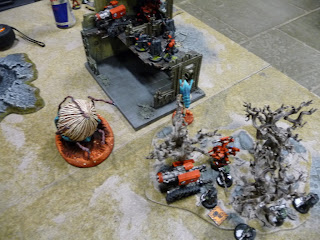 This is what I wrote last October:


Oh dear, what did you do? I think it may have killed a couple of things but overall it was 200pts that may well have been wasted. Perhaps it took fire which allowed the Tervigons to shine...

and it repeated that situation. I may consider saving 30pts and going with a Mawloc in future. If all it's going to do is get shot I may as well do it for cheaper and have a large blast attack to boot. 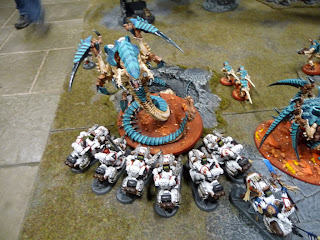 Aegis Defence Line
Game 3 and this baby must have made it's points back 10 times over, although ultimately it could not save everything. I think I was able to come up with some effective formations, although some didn't get me in a position to capitalise on the 24" range for an Impaler Cannon. That flexibility makes me shake my head when I see folk who have mounted theirs on a base, or recently I saw someone had magnetised the edged of theirs, which sounds and looks cool but really only gives you a straight line.

However, there was the occasional misunderstanding where my opponents didn't know that Fortifications are deployed in your table half, not your Deployment Zone. So when I'm putting it in advance of my army they think I'm trying a fast one. Equally the remarks from bystanders about Tyranids shouldn't have them was irritating, like Tyranids don't create structures on a planet  - digestion pits, spore chimneys, brood hives. And of course they defend these with a variety of bioforms. Those comments just illustrate an ignorance of the army in general. It's not really a big issue it's just an annoyance to have folk pass comment while you're playing and not have the opportunity to educate them, it's not like there's a lot of love for the bug anyway, who'd have thought that I'd come to the defence of these things.

Anyway, the big thing of course is that they won me Monument of Legend - Best Fortification prize. I'm pretty sure if it hadn't been in my army list with people seeing it in action it may not have succeeded. I think the pic below is evident that it certainly stands out on a standard Warhammer World Realm of Battle board. Of course there were only 5 entries which increased my odds but it was an accolade I was ludicrously happy about and made up for my less than stellar success on the battlefield. 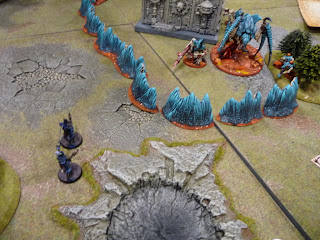 Biomancy
How fickle the tides of the Empyrean. Obviously game 3 where I had all the powers at my disposal to survive almost anything only to be nobbled by poison weapons is a downer. Quite a few Endurance wounds were saved which totally renewed my faith in the powers beyond Catalyst. However I also got a few occasions where I was stuck with Haemorrhage AND Life Leech, was resigned to using them and they may have been effective too but as far as I can recall didn't bother! I also suffered a 1 in 5 Witchfire for my Broodlord with only one game where he traded his powers only to get nothing in return. Sorry but this sucks, I still don't get it and I still don't get why its FAQed that way. If I roll something above my Psyker level I get a re-roll because, one can assume, he isn't going to learn something too powerful for him. In the same context he's not going to learn something he has no ability to cast. Equally if you roll a double you get to re-roll as he isn't going to learn the same thing twice. The fairest option is a re-roll for a Broodlord, I've looked at Telepathy and Telekinesis too and the options are even less favourable for him there. I really should write a well considered appeal to the FAQ team about this, it's a nonsense. 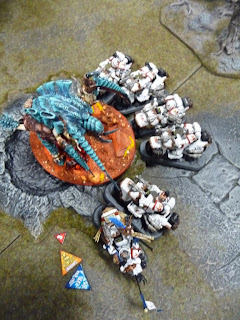 Say what you like about GW, its policies, practices, prices etc. but one thing they get right and it's Warhammer World. The weekend actually feels good value, the food that's included is top notch and the staff are excellent to the point where even after just three visits they are getting to know us and treat us like old friends. Even at the end of the tournament they asked if we'd had a good time when, lets face it, the sooner we vacated the building the sooner they could finish for the day. The last comment of the day was when I asked Nick 'if and when they renew some of the battle boards he would suggest a red planet one is created so my army would look even better' to which he replied 'well if perhaps you'd killed a few more people the board would have been stained red already' which my mates thought was hilarious.

Also there were significant improvements in the event compared to last October. It was a smoother operation from the Events team, games got underway easier and getting food was just as simple. One aspect I took upon myself to improve was to move my army to my next table as soon after finishing as it was announced. Quite often that meant the hall was relatively empty meaning I could navigate stools and gear with my horde without having 140+ other gamers trying to do exactly the same thing at the same time, just some advice if you go.

Ultimately I had a great time, the gaming success was minimal but I feel there were some moral victories in amongst the defeats and draws. I know I could have won two more games than I did but for my own misunderstanding and choice but even so they were all great games against thoroughly decent opponents. My only real problem was the nervous excitement and unnecessary stress that these events bring that manifest as silly errors and quite often indigestion. I'm not sure why I get this way, particularly when I want to have fun. In the end I was the least successful Tyranid player there and was ranked just outside the top 100 [I think] in joint 101st another vote for favourite game might have tipped me up a notch but there's nothing I could do about that. But I will look forward to going again, the guys have suggested October/November but I'll have to see if I can afford it. Until then I hope you liked the reports.
Posted by 40kaddict at 12:19