Last game of the Tournament, bring it on for the win!

Chris Langton - Space Marine Iron Clad Drop pods, Scout Bikers and Thunderfire Cannons. So a similar list to what I've just faced  but with Iron Clads and Scout Bikers. As you can see my defence line holds my objective and I set up as far back as possible, Chris has his objective in the ruin top right. Chris had 'mined' some piece of terrain with his scouts, I assumed it was the ruin to my left, denying me putting my Hive Guard in it. I infiltrated the Stealers in the ruin opposite Chris's objective with the plan to leave them there until I could do a dirty dive across the 12-18 inches to contest the objective he held. 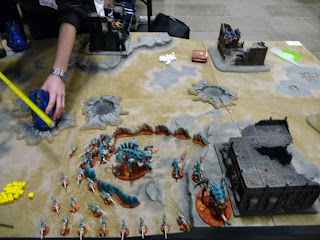 The Scout Bikers on my extreme left flank and snuck  round this Bastion. 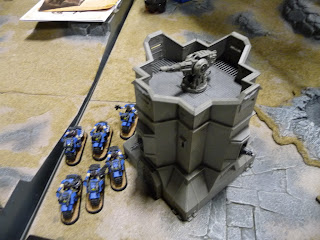 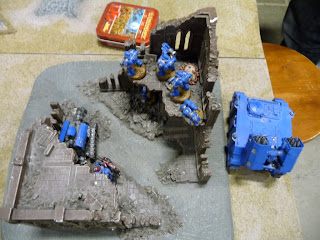 The Drop Pods start to land. 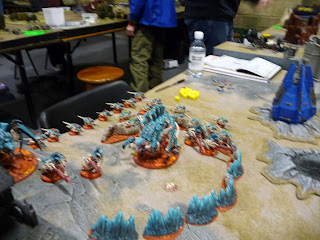 Some slight deviation but no damage to the drop pods and the Scout Bikers leave the safety of their cover and kill 6 of the exposed Devgaunts [thanks to grenade launchers], but not enough for First Blood. The CC Tervigon takes 2 wounds as well. 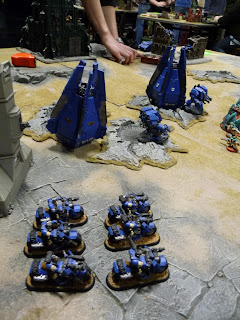 I go for a quick First Blood on an Iron Clads drop pod. I also end up in the same situation as my previous game regarding charging and Overwatch. Chris also believes, like Steve, that charges are run simultaneously and he will get to choose which unit he will overwatch on in a multiple charge. Knowing exactly where to look in the book helps reconcile the situation but once again I'm left with a situation where my opponent then believes that the Tervigon will not get into assault as it can acheive 'base contact'. This de'ja vu makes me think I have got it wrong but every game I've ever played has been like this and the rules support that view so I'm convinced you make your overwatch or risk not getting to overwatch at all. I also believe the second charger gets to complete if it can get within 2" of an engaged model, although I'd agree it would have to make a charge roll that would actually reach the model it wishes to engage, please if anyone can shed light on this I'm open to discussion. Anyway CC Tervigon spawned 10 over the defence line and they charged the Ironclad only losing 3 but at least he's tarpitted 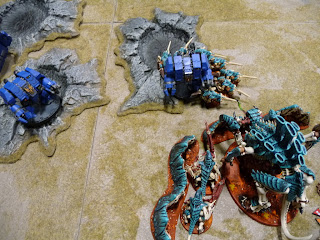 Vanilla Tervigon spawned out on 13 but shortly thereafter Chris's Whirlwind drops a pie-plate on them taking out around 9 in one shot! 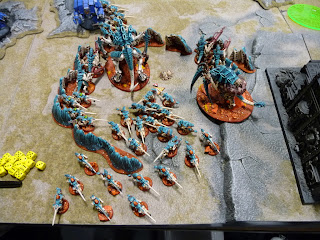 Devgaunts and anything else targetted the Scouts and manage to halve their number. 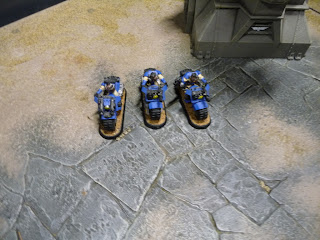 Boom, another Drop Pod lands in the centre of the board. 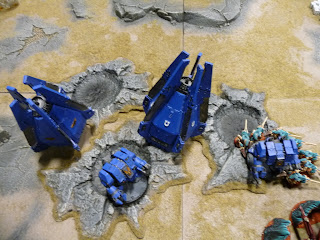 Out pops a tactical squad, the scout bikers close in on my defence line. 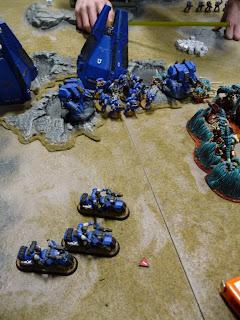 Chris had forgotten to deploy a five man squad so slogged them on over by his objective. 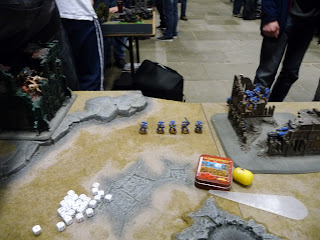 The CC Tervigon takes another couple of wounds, there was some debate over whether it would get a save from the missile launcher in the first floor ruins. When it was back in the middle of my line we judged no but I was of the opinion it would get one when it reached the line. However, when it did the sheer scale of the base meant we did a 50:50 to see if it got a cover save or not. I guess that's the price you pay for a 'big caboose'. Meanwhile the Hive Guard take a wound per brood. 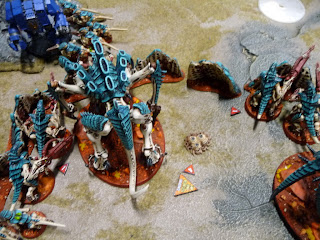 But managed to get a glance on the Iron Clad 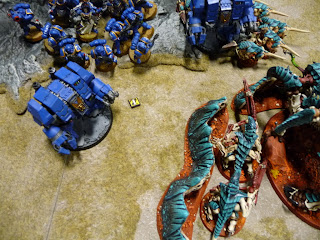 There's a Librarian and I think an Apothecary with the Tactical Squad so this may be a tough nut to crack. The CC Tervigon spans out 6 more gaunts behind the wall to try and have plenty of scoring troops surrounding my objective. 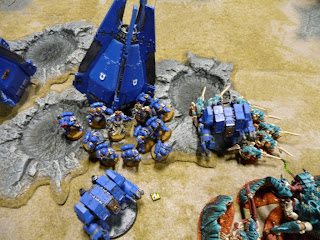 Boom, my spore pod arrives and on target by the looks of the dice. The Doom gets out and I think makes it into Spirit Leech range of the Techmarine, and both combat Squads. However, I think Chris passes his Leadership tests so he fails to deliver. 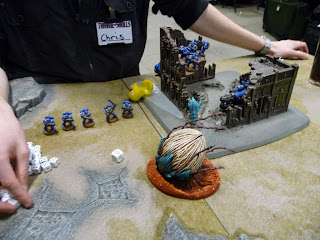 Spot the difference? OK, so my Hive Guard have moved out of shot, killed the hulled Iron Clad and the tarpitted Dreadnought was brought low by the intervention of the CC Tervigon. Once again it's an education regards the Smash Rules, how you halve only the base attacks which for a Tervigon is 3 so it gets 2 smash +1 on the charge +D3 for Crushing Claws [and ideally another +D3 if I have Warp Speed] and getting to re-roll penetrating hits and adding +1 to the chart! Anyway, it looks like he blew up and took a marine with him too. I consolidate towards the tactical squad. 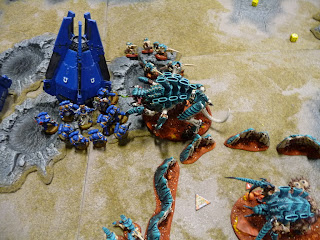 I kindly inform Chris that he's going to be leeched in his turn too so he moves out of Leech range and fires everything at the Doom which just can't make enough saves and falls, it's really not been the Doom's tournament, even with Psychic Shriek. 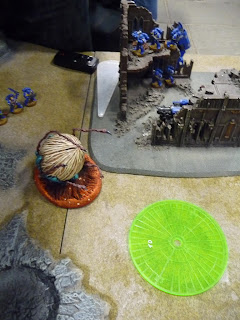 The CC Tervigon regenerates a wound thanks to Endurance and It Will Not Die :) The five Termagants head off to support the Stealers when they make a move, note that they have Devourers, but these were just normal Felshborer gaunts. I'd used the Devgaunts with Toxin Sacs for my Devgaunts this game ]only one remains] as I found those 10 quicker in my boxes than the WYSIWYG ones. I've lost a Hive Guard but the other Brood is still only suffering one wound. Only 1 Scout Biker remains against the lone Devguants and 4 of the 6 spawned gaunts. 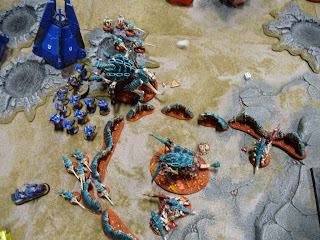 Even with 3 wound spare and FnP the CC Tervigon falls and somehow takes a Marine with it, not much comfort. 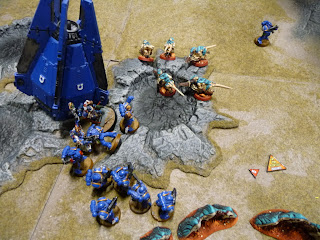 The Scout Biker assaults my Termagants. I'm slightly confused because there's only three in this shot bt somehow they prevail, probably counter attack thanks to the nearby vanilla Tervigon. 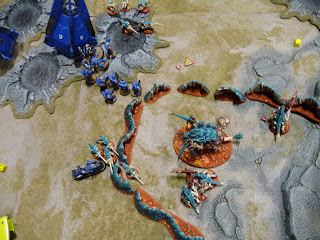 However, having killed the scout they consolidate back to man the defence wall but now there are 4? It would also appear when my CC Tervigon imploded it took 4 Termagants with it. The tactical squad consolidated towards them, I'm not sure why, maybe hoping to take cover. 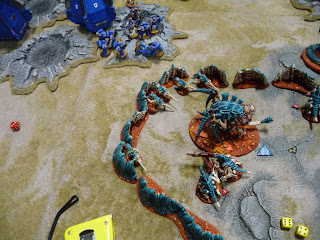 But covers no good against Hive Guard and their armour save is better anyway so Fleshborer, Impaler Cannon and Stinger Salvos result in two more Marines falling. 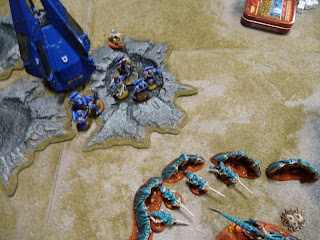 About bloomin' time too. The Scourge of Oktavia Deep Strikes onto the board and precision shoots the Missile Launcher and a second marine out of the Tactical Squad holding the objective. 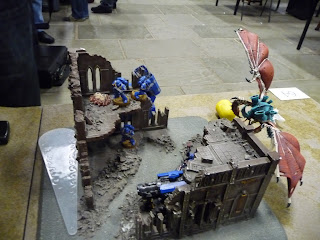 The Genestealers sallied forth from their hiding places. Lo and behold it was this ruin that had been mined by the scouts, my hiding had not disturbed the mines but moving out did. I may have lost a stealer but the Broodlord and one stealer maker it into assault. I think the sergeant suffers for his bravery. 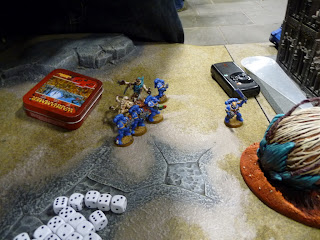 Termagants are gone, four was obviously not enough to stem the tide and the marines consolidate and break over the defence line [we'll ignore the fact they're within an inch of my Tervigon]. It would also seem my Trygon has turned up too, better late than never I suppose. 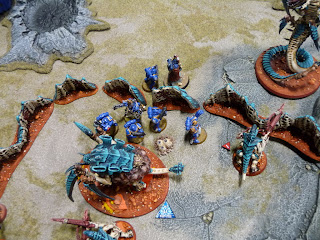 Hive Guard repositions and combined fire from Devourers, Impalers, Bio-Electric Pulse and Stinger Salvo takes down 5 Marines but the objective is contested and he has Linebreaker. 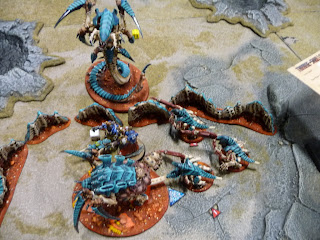 I do the only thing I can, the Hive Tyrant lands and shoots the remaining Marines. I don't think he even needed to get into combat to contest. The marines are dead and the objective is lost. 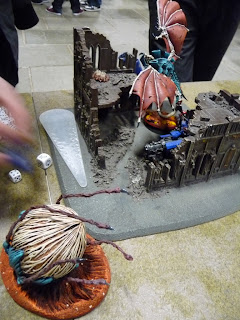 The end result 2VPs to me - First Blood and Linebreaker and 1 VP to Chris - Linebreaker. I finally snatch a win. I don't know what happened next whether my Tervigon or Stealers survived but with all it's wounds and the Trygon in tow I should think the end of the Marines in any further turns [if the game hadn't ended] would have been inevitable.

So I snatch a victory to end the weekend 2 loses, 2 draws and 1 victory. I'll do a post Thrones review next but in conclusion the Doom didn't quite deliver [again] the Trygon and Hive Tyrant seemed to take an awful long time to turn up, I forget why but I guess it was just bad dice. I'm not sure if we ran out of time, we did start a little late as I was getting my figures out of the display cabinets but Chris did have the initiative to realise I was having to get them all and had come over before the game began and helped out with collecting and transporting them across the hall, something I was extremely grateful for. Overall this was a great game, another one that had plenty of folks standing watch over. Chris said that he was more of a Fantasy player and I think perhaps it was for this reason I gained the upper hand. I think perhaps playing against nids was a new experience, certainly the Doom was an eye-opener for him. I think perhaps my single minded pursuit of First Blood and holding the Stealers back who would gain me Linebreaker even without the Hive Tyrant was the tipping point. I was playing the objectives, both primary and secondary and in that respect it felt very much like my games in the previous Throne of Skulls where I was able to control the games more, even when the dice didn't roll my way.

Anyway, a great game and a great end to the day.