Terrain is everything - Inquisitorial Vault/Reformatry/Bastille

So I've had this Inquisitorial Vault in development for a while. I'd looked at creating a number of straight sided buildings with less gothic elements and more 'brutalist' architecture however during the process I've reintroduced some of the gothic bits - buttresses, detailing etc. with the main feature being numerous windows with bevelled insets. 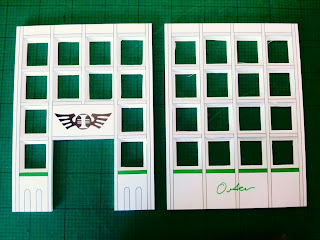 Each horizontal edge will have a 5x5mm strip spanning the width. I will be using cable ties to face them and cover the exposed foam edges. There will also be vertical buttress strips 10mm deep that will also be faced the same and will stand 10mm or so above the rooftop wall. All the window cavities will be card faced with an additional sheet of foamboard on the bottom of the building. 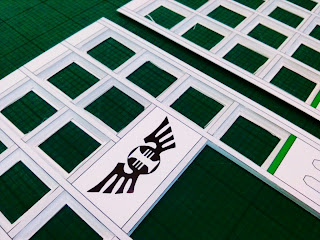 To make sure the windows were as neat as possible I actually printed a second template and mounted it on the back. This way I could cut through the rear inner window rebate and then turn it over and cut through the outer window at an angle. This turned out to be the neatest finish compared to a test piece which was to cut through all the way down and then all the way up and hope the cuts lined up on the reverse [which it didn't]. Oh, it's pretty much A4 in size, the Space Marine in the doorway used for scale. 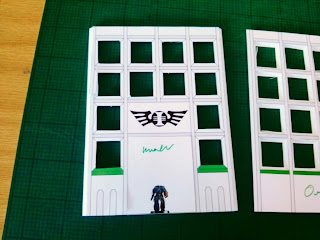 Anyway, once the plans are down and you get to have a go you'll soon get the hang of it - new blades an absolute must, because here's what comes next the Inquisitorial Reformatry and Bastille. The Vault is the middle bit it'll be split diagonally so you can gain access inside. The outer Reformatry will also be split diagonally so you can enclose the Vault. The Bastille will sit in the Modular Plug socket on the roof of the Vault. There's also plenty of option for change at this stage. Access to the interior of the Bastille will be difficult so I may consider making the windows double height [and/or width], with option to mix it up a bit [although you'd have to create your own window capping for the insets]. Equally you could choose not to add the buttresses and horizontal details, filling in windows as and when you see fit. I had planned to use some plastic folder wallets for windows too! 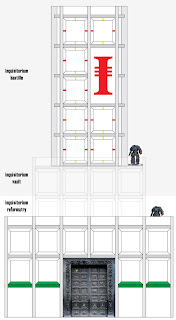 Anyway, so that's a little leak of what's going down in Avro Vulcan's workshop, unusually open considering the nature of the plans, perhaps he's trying to prevent being scooped by the Free Radical Collective?﻿ The positive note is that the Vault is coming along so the STC will definitely be this year ;) Coincidentally I was watching RED recently and noticed it had a similar aesthetic as the Original Headquarters Building of the CIA.

The funny thing about this build and the accelerated progress﻿ is it's all a smoke screen, a 'flim-flam', it's really just procrastination for painting the Dark Angels and the worst [or best] thing about it is this is not the only build I've started. Given my recent success with my Tyranid Aegis Defence Line I'm looking to add something else to my Nids that won't cost me a penny but for my time and creativity...
Posted by 40kaddict at 12:06