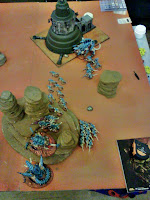 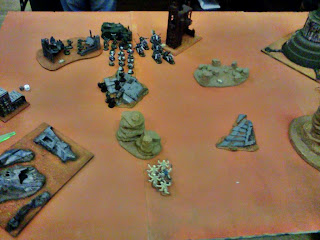 With the initiative mine I Iron Armed up on all the psykers spawned out 17 Termagants from the Troop Tervigon at the top and spawned out 10 from the HQ at the bottom. Everything moved up and ran as there was no one within range of any weapons. 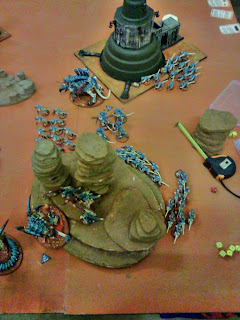 The Stealers took cover in the rock formation. Given how these guys quite often get slaughtered early on I was happily reigned to that situation given that they were a very immediate threat to Gonders marines and would potentially draw a lot of fire compared to the rest of the force advancing across the board. 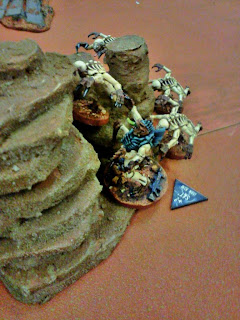 The Ravenwing started their attack sweeping across in front of the 'Brides of Caliban' :) [yes we had a lot of fun discussing the 'hen party' that is Gonders be-robed Tactical Squad. 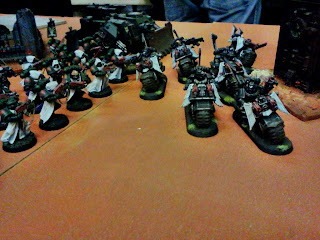 The Ravenwing manage to get in range of the Stealers. 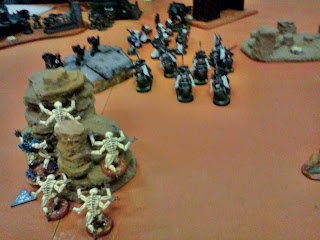 And pick off the two exposed xenos on the cliffs. 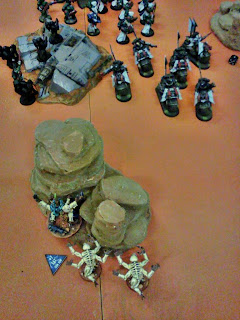 Further fire from the Dark Angels took out 3 Hormagaunts. 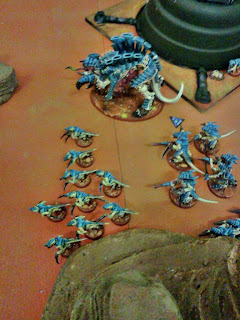 My turn two and a series of disastrous armour saves removed 5 of the Bridal squad thanks to Hive Guard, Tervigon, Tyranid Warrior and Devgaunt combined shotting 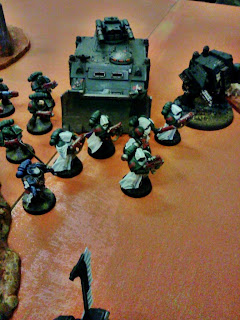 The Trygon tried to charge into combat but couldn't make it, even with Fleet re-rolls. Instead the remaining Stealers were sacrificed to deliver the Broodlord into a challenge with the Ravenwing Sergeant. Five Hormagaunts were left alive through overwatch but killed an Enfeebled Ravenwing. 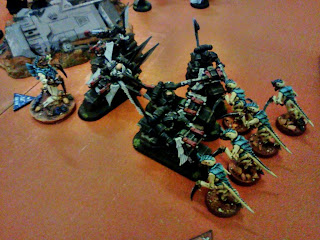 The Broodlord on St9 thanks to Adrenal Glands and Iron Arm slaughters the Ravenwing Sergeant. The Ravenwing only manage to kill one Hormagaunt in combat! 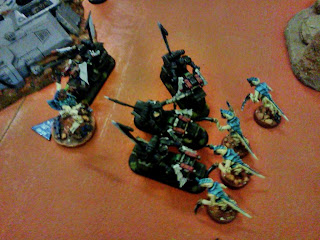 The razorback deposits the Dark Angel Command Squad right into the thick of things and one of the Tyranid Warriors is killed but not by the Razorback as it's twin-linked Las-Cannons have never killed a single entity in the four months of this campaign, Gonders would want you to know this. 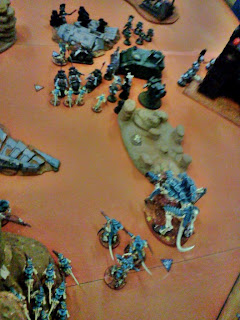 The Hive Guard wreck the Razorback for First Blood, once again preserving it's track record of impotence. The Tervigon makes it into combat with the Dreadnought but failed his Iron Arm roll. The Trygon joins the fight with the Ravenwing and the Warriors make it into combat with the Command Squad, the Prime and the Librarian going toe-to-toe in a challenge. 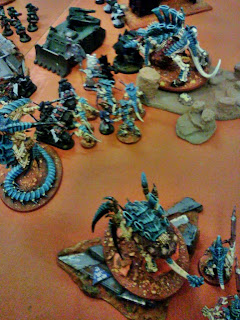 The Tervigon puts two penetrating hits on the Dreadnought, more importantly he rips the Close Combat weapon off it with it's Crushing Claws. Two of the Warriors have been smashed by the Power Fist sergeant and the Warrior puts a wound on the Librarian who I think passed his Ld test for the Boneswords. 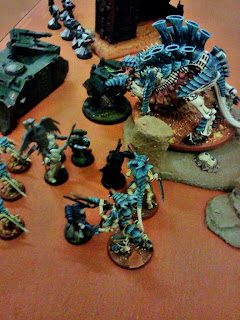 With little choice the Librarian tries to activate one of his Psychic abilities to keep the squad in the fight but shadows in the warp forces him to fail and with double 6s he loses his last wound! Fortune does not favour the first Legion today. 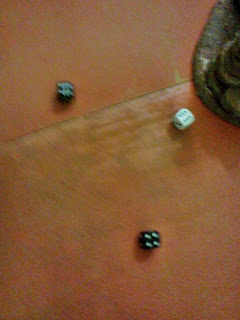 The Ravewing are also slaughtered with the Trygon only managing to despatch the last biker after the Broodlord and Hormagaunts are done. he did take a wound or two in the process and the consolidation put the Hormagaunts in the sights of the Bridal squad who managed to take down one unit at least. 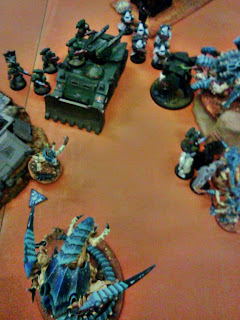 The Tervigon had wrecked the Dreadnought, moved out of cover and wanted the Brides! 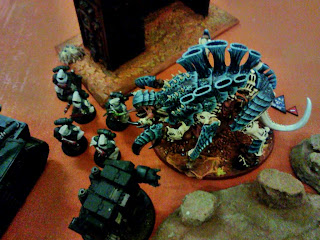 The Broodlord takes a couple of wounds from the tactical squad in the ruins and surrounding the wrecked Razorback, one of the squad died from climbing on the vehicle. 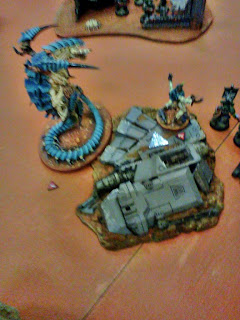 The HQ Tervigon joined the combat with the command squad, which thanks to the efforts of their Apothecary [FnP] and the Power Fist Veteran had killed off the Prime for Slay thee Warlord. 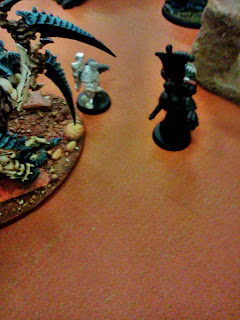 The end of the 4th turn and we had to call it a night. The Brides were still in combat, the Command Squad was down to two and the HQ Tervigon had suffered a couple of wounds from the Power Fist. The Broodlord managed to evade all incoming fire which was focused on him to try and bring him down. 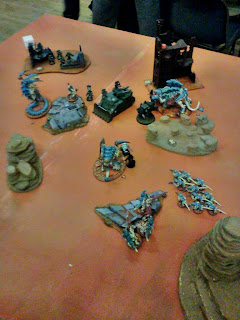 With both my spawned Termagants holding objectives a 3VP each and First Blood, Slay the Warlord and Line Breaker I was on 9VP and Gonders had 4VP, for the ruin objective and Slay the Warlord.

Seizing the initiative was the beginning of the Dark Angels doom. It wasn't helped by all the psykers having Iron Arm but Gonders dice rolling was appalling - a lot of 1s for 2+ to wound rolls and Power Armour was equally ineffective. Saying that the Tyranid Prime was his usual ineffective self failing to wound and therefore his armour save ignoring bonesword was useless. I may have to consider Adrenal Glands for him just to buff his strength - even 3+ isn't enough. Saying that for 10 pts I could have had Regeneration on him...

As for Dark Angels, well with my own efforts to do my force this didn't bode well but the early rumours are the Codex relies on 'synergy' [where've we heard that before] getting a mix of Ravenwing, Deathwing and Greenwing so it all fights together. Gonders hasn't really had that opportunity. His 1250pts has been built in 250pt chunks so it's no surprise it's finding things difficult when I've got three monstrous creatures - T6 and W6 with the ability to make them even more durable. That's before you factor in Termagants, Hormagaunts, 12 wounds of Warriors and the 6 wounds of the Hive Guard. A really tough challenge for him.