Having finished the Ymgarl conversions it was time to prime them and I'm sure the eagle-eyed amongst you will have noticed these have not been primed white as normal. You would be correct, the simple reason being I ran out of white primer part way through. 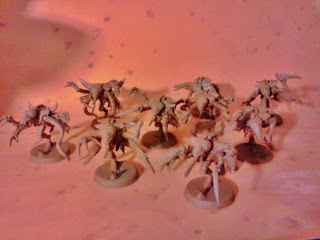 The lovely fluffy excuse goes something like this: personally I don't hold much with the idea that your Tyranids will often reflect the planet they're on colour wise, insomuch as in an initial invasion the brood may not have assimilated enough native genetic material to adapt their colouring to their surroundings. However, I have started to introduce more reds into my Hive Fleet, and certainly in regards to Ymgarls who have lain dormant on the planet and in the process absorbed the natural elements in their surroundings I think I can introduce a little more. 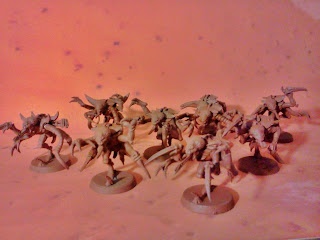 That's not to say these will have red armoured plates but I will be accentuating those bits that were traditionally my 'liver washed browns' as more towards the reds and pinks of my Hive Guard weapons [incidentally that Olive Oil has evaporated a bit revealing the frosting again :( ]

Instant update, and here's the first coat of my cheap 'Latte' craft acrylic. I only really wanted to show this for just how brutally untidy this coat needs to be. 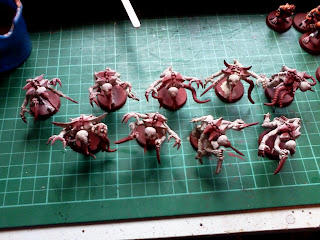 I'm quietly confident all the other colour blocked in will help tidy this up but the actual messiness and poor coverage should allow at least a hint of the red oxide undercoat to show through. 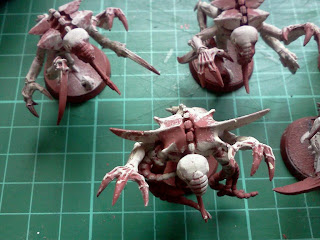 It's quite scary in a way as although this will follow the method I've painted the entire brood I do think there's  quite a lot that's different in the process too. 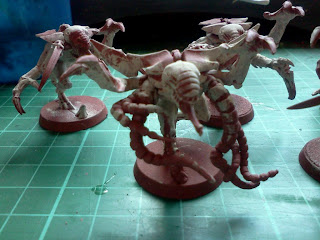 Hopefully the 'fluff' can explain the discrepancies if they're too apparent but we'll see how it goes.