I hope the number of GK battles I'm getting through isn't tiresome for you all but when you have a few people to play you're often going to face the same armies, especially for those building and discovering their new force. This was another pre-Throne of Skulls game that got put back due to the immediacy of the tournament reports and other more interesting posts. In fact this was the game that convinced me to take the Doom to ToS, that should foreshadow his impact on the game...

My local friendly neighbourhood gaming club had another Saturday opening, mainly for guys doing a Fantasy campaign. PeteB came off a night shift to paint some figures and pick up a game if I was there, which I was, with my son. He was planning on taking part in a local tournament so wanted 1250pts. I'd took a simple 1000pt list and added 3 Hive Guard [for a change] and the Doom of Malantai [for the giggles]. Dawn of war setup, Purge the Alien [of course]. I got Intimidating Presence on the Prime [again] and I'm pretty sure the Broodlord gained one witchfire spell [useless!] but also Endurance, not so sure what the Tervigon got but I think one was Enfeeble.

Here's my deployment, I think I went first, one thing to note is that the ruined building on the left has two towers either end of the walkway, currently the Broodlord and Stealers are hiding in the tower at the top which has no windows on the other side so PeteB can't see them and hopefully will forget about them until his force advances and they can spill forth to his surprise. 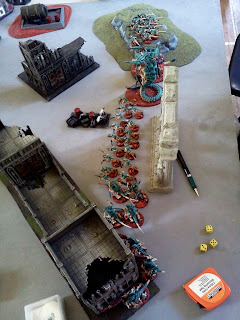 As usual I advance, the Devourers taking the right flank and making cover in the ruins. Everything is a bit pinched at the point but I'm hoping to weather the oncoming storm. Shooting didn't go as well as it could have, the Hive Guard fired on his Razorback, I think five of the six hit but I only got one penetrating shot! So much for that extra Hive Guard. Amusingly however, the tank was immobilised which if you recall the last time we played it was immobilised first turn on a hedge! This Razorback is not for travelling long distances. you can just see the Stealers in the middle left tower who were 'Endured'. No spawning of Termagants for the Tervigon, I was already 10 VP's to PeteB's 9 I didn't want to increase that dis-advantage. 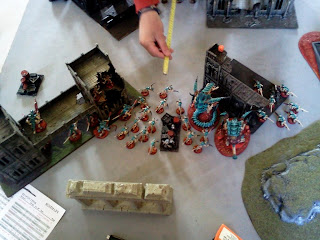 PeteB's first turn advance, not sure what took place but I survived most of it but think I lost one of the Hive Guard , once again so much for the extra body. 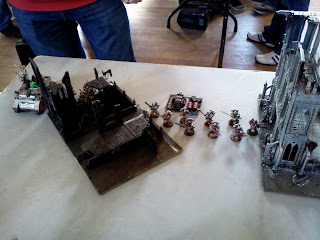 Turn 2 and I continue to surge forwards while my son builds dice towers! No sign of the Doom. The Tervigon elects not to spawn but Enfeebles the Knight squad opposite. The Stealers bide their time and Endure. The Devgaunts move further into the ruins and shoot, alongside the Deathspitters of the Warriors the Enfeebled Knights doing serious damage due to their T3. The Hive Guard target the Razorback again and this time strip away it's remaining hull points. Pete disembarks the ruined Razorback. 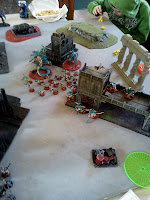 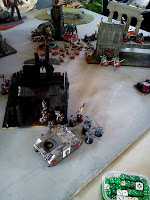 Both Dreadknights and Terminators [just in front of the left tower] Deepstrike. 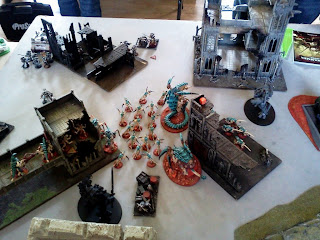 In the haste to deploy all three units the sensor arrays must have been well short of acceptable co-ordinate tolerances. The Terminators deviate closer to the tower, the grey NDK into the ruin shruggeing off any ill effects and the black NDK deviates onto my Tervigon and emergency shunts to the very back of his deployment zone facing the wrong way! 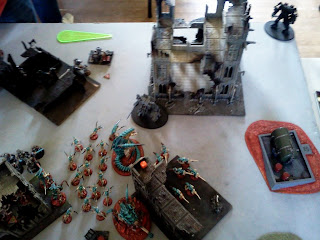 Everything advances, some of them teleporting forwards. At this point my son decides to point out I have a brood of Genestealers hiding opposite his guys! Thanks for that son! 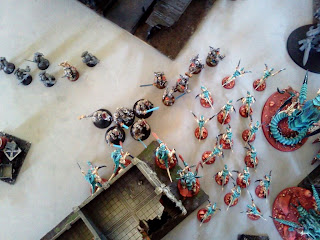 The NDK incinerates a vast swathe of Hormagaunts an a couple of wounds are taken by the Tyranid Warriors. 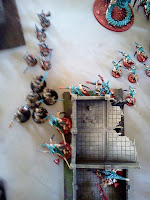 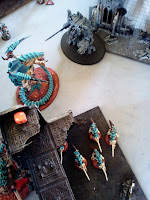 The five Purifiers [?] and their Champion assault the Warriors, the Champion and Tyranid Prime rolling off to see who's special rules - Lash Whip and I10 attacks take place first. Despite my boneswords negating armour save we remain locked in combat but the Warriors lose two while killing two marines and the assault continues. 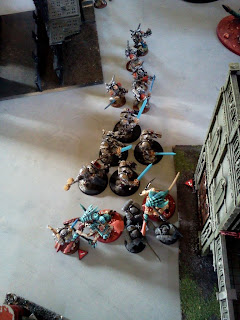 The Stealers surge from the Tower, the Tervigon Enfeebles the grey NDK and the Devgaunts move further away from the black  NDK who is hurrying to get in the fight and has the 12" range template flamer to shoot. The Tervigon decides to spawn some gants for extra firepower and soak up overwatch. They all shoot, including the Hive Guard at the five man squad in the middle who lose one and teleport jump back to their deployment zone leaving a lot of frustrated Tyranids with no one to assault. 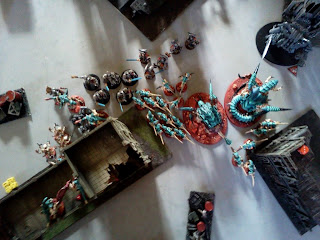 The Devgaunts targeted the front four knights and they routed off the board. 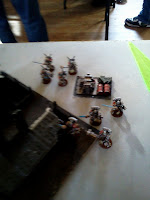 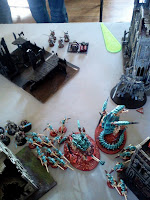 The melee continued with the titanic challenge failing to deliver a victor. The Broodlord and Stealer demolished the Purifiers leaving them and the remaining Warrior to stand and watch the challenge. Meanwhile the Termagants assaulted the Grey Knight Terminators and thanks to the Adrenal Glands and Toxin Sacs managed to kill one knight while taking five losses of their own [an acceptable trade]. 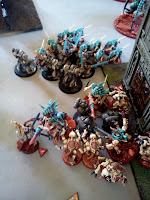 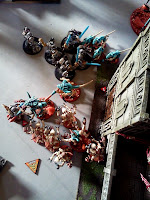 The Trygon finally took the fight to the NDK who, being Enfeebled, had little response to it's seven attacks and was mauled to pieces. 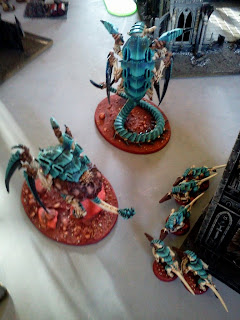 PeteB's turn and the Terminators kill the remaining Termagants, the teleport knights jumped back into the fray and went for the big brawl with the Prime finally getting his Bonesword through the Champions might defence and winning the challenge. 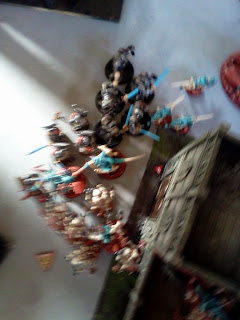 And thus came the Doom, smack in the middle of everything. It sucked the life from all four knights in combat and gained four wounds. It may have taken some or all of the terminators too, unless the stealers and Warriors finished them off. 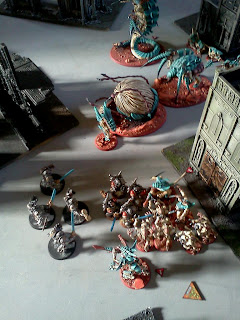 Despite the game turning setback the black NDK arrived and managed to go through both Tervigon and Trygon but the game was flowing so thick and fast at this stage I didn't take pics and my recollections is hazy. He moved out of range of the Doom... 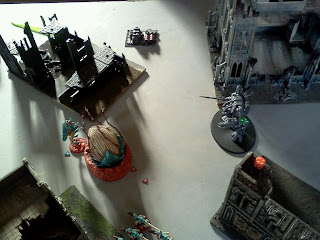 but not far enough as it floated towards it sucking the remaining life force from the NDK leaving the battlefield a slaughterhouse for the Emperor's finest. 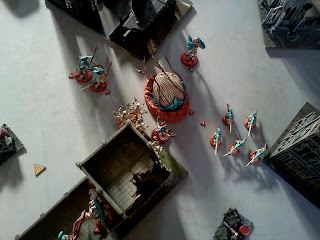 And that's how the Doom of Malantai can turn a game on it's head. Often when it comes in too early it gets slaughtered but there was very little left that wasn't already engaged to counter it's no saving throw life sucking abilities.