Got to go to the last games night of the year at my local friendly neighbourhood gaming club - that gives you an idea of how long it takes to write and fit these reports into my blogging schedule. Anyway I was hoping to fit in my next 40k campaign game. We're up to 1250 points now. I missed the 1000pt month as one week I turned up I ended up playing a young lad and his Necrons, it being one of his first games of 6th edition - so that didn't feature in the campaign. My next visit the club wa sshut due to poor attendance. C'est la vie.

This game once again slipped outside of the campaign but it wa still 1250 points against a guy called Dan who've I'd never met before. A straight forward Necron force built around two Triarch Stalkers, three Spyders, an Annihilation Barge and Immortals with Gauss Blasters, no Mindshackle Scarabs [phew] and few upgrades other than Reanimation Protocol buffs [I think].


We got The Relic [spore pod on top of the dilapidated Bastion 5+ cover save] with Dawn of War setup, I let him go first. I set up mainly asymmetrically to his force, 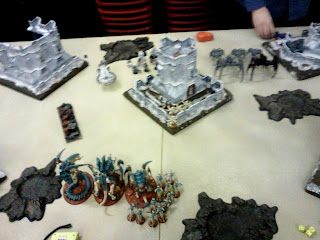 but with my Hive Guard hidden in this building on the right flank, supported by the Warriors, Prime and Devgaunts 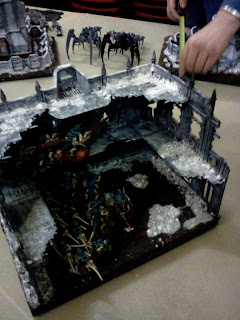 Turn 1 and the Triarch Stalkers, Immortals [that can target] and anything else shoot and destroy the Infiltrated Stealers and Broodlord. First Blood to Dan [must stop overextending like this]. 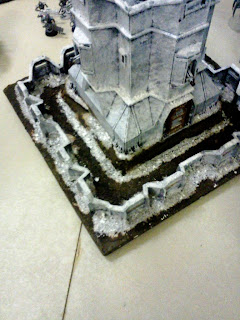 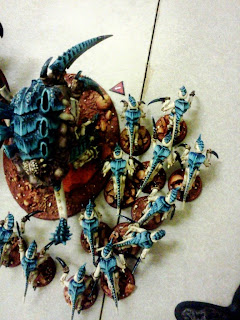 10 Termagants spawned into the dilapidated Bastion [they're on the floor below]. 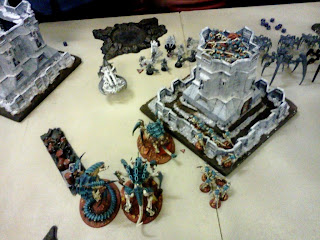 Two glancing hits on one of the Stalkers thanks to the Brood of 3 Hive Guard, Warriors and Devgaunts advance within ruins but don't come out. 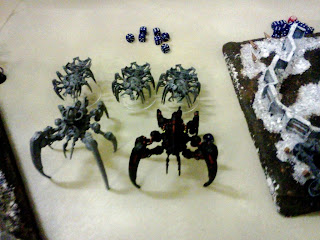 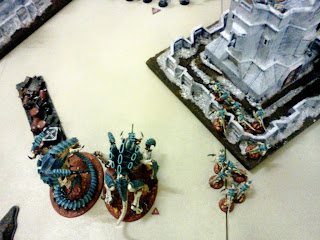 Termagants get roasted in the bastion and the undamaged Stalker assaults the Hormagaunts who kills a few. 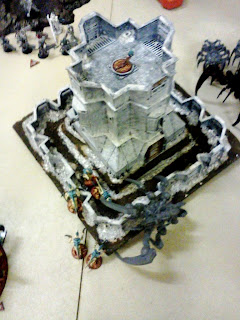 Troop Tervigon spawns 6 or 7 and aassaults the Stalker back and flattens it. I don't think I ever rolled anything other than Warp Speed +2 all game 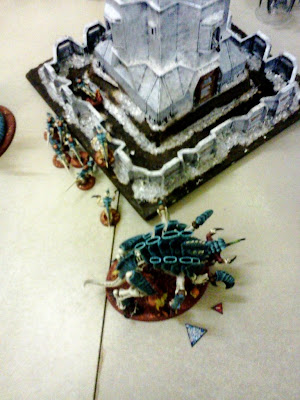 The other Stalker gets blown up by Hive Guard 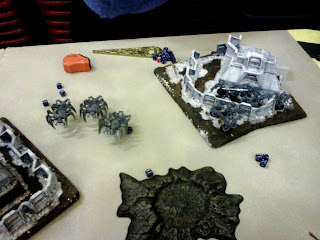 The Trygon manages to get into combat with the Immortals, Cryptek and Overlord. I wanted to go for the Barge but it levitated up to the ruin in the top left. He takes a couple of wounds from overwatch and kills around four in return but the Overlord does serious damage on him and most of the Immortals get back up again. I realise I can't win this war of attrition. The Overlord has too much killing power and enough Immortals to weather the damage then Trygon can give but there's nothing I can get in to support it before the inevitable. 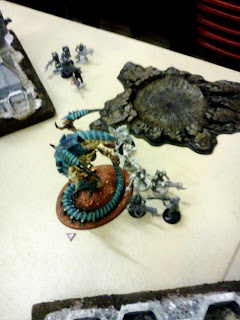 I have a choice at this point whether to assault the Spyders or the Annihilation Barge, left or right, one or the other. I choose the Spyders hoping if I win at least I can get a consolidation back towards the Barge. I manage to put two wounds on the Spyders prior to this assault from Hive Guard. The Tervigon slams a further 4 wounds into them leaving one Spyder left and takes 1 wound in return. 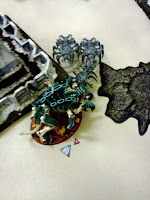 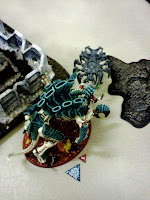 The Trygon survives two turns of combat before finally succumbing to the inevitable. 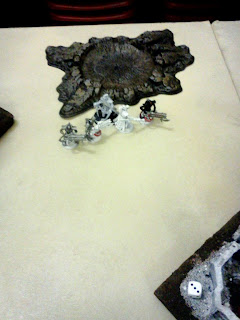 Tervigon finished the Spyder off and consolidates 4" 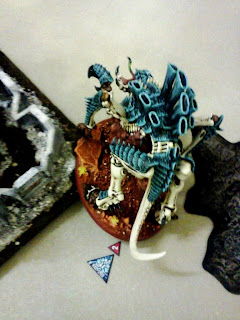 On the right flank the Devgaunts and Warriors had come out and whittled down the Immortals on that flank, in the process two Warriors got zapped. Fearful that my Synapse on the flank would go the Warriors retreated back into the ruins as I realised assaulting them would not bring about their doom, only weight of fire, which that flank had in spades already. 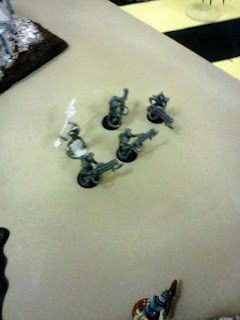 The Tervigon poops out with the last of his Termagants secruing the Relic together with a lone Gaunt [no adrenal gland marking - see it is a useful brood indicator] from a previously spawned brood. 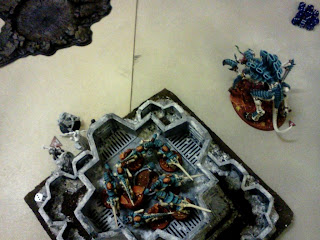 Here comes the 'Hail Mary Play' - Dan Tank Shocks the brood, but Immobilises himself on the Bastion Walls. He shoots with the Tesla weapons killing all but 1 of the Termagants and arcing and killing the lone Gaunt. I guess I should have turned left with the Tervigon! 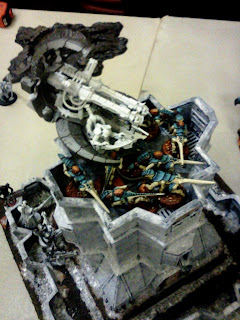 The Tyranid Warrior is killed off and the Prime takes two wounds from the remaining Mortals on the right. 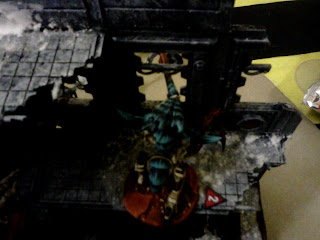 But the return fire and Devgaunts kills all the remaing unit. 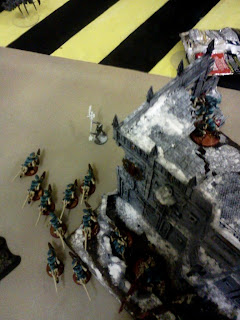 The Tervigon makes Line Breaker and the situation with the Relic becomes a stalemate. I can't pick up the Relic because I can't end my turn next to the Barge. I can't pick it up and run because you can't run and you can only pick it up at the end of the turn so no move and move back. I'm sure there was room to argue this perhaps even move pick it up and assault the barge but if you can't run with it you probably shouldn't be assaulting [although it doesn't say either way in the rules]. Anyway, the Hive Guard managed to move just within range but the 2 or 3 penetrating hits only succeeded in shaking the crew. That was turn 5 and the game had to finish. 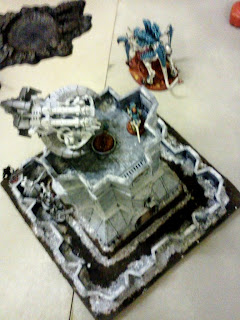 The game would have continued to turn 6 but the Immortals wouldn't have made the roof on the quick dice roll Dan made leavign it as a stalemate. 1VP each First Blood for Dan, Line Breaker for me [Note that although my HQ Tervigon died he was not me Warlord. I was usin﻿g my campaign list and the Prime is my Warlord in that].

Overall a good game, the HQ Tervigon went early and the Stealers paid for a poor setup choice. The Trygon suffered from an under-estimation of the unit he was assaulting. It was far more durable than I thought it would be. The Crushing Clawed tervigon was a beast - a Triarch Stalker and 3 Canoptek Spyders to it's name. Of course if it had smashed the Barge I may have won but there would have been still Spyders to contend with and they would have probably slaughtered the units in the Bastion too. Anyway the game played as it did and I'll take a draw, learn from it and come back with a new tactic from the Hive Mind.