aah, but which weekend? So much progress on so many things and so many photographs and that's not even including the treasures from my parents loft. I've got content coming out the 'wahzoo' so much I feel it's too much, I'm struggling to keep everything coherent and just a couple of tweaks to the nu-blogger interface could help, like duplicating blog posts or allowing you to edit the scheduling in the list of posts instead of just within the post edit itself. Still it's an improvement functionally although I'd appreciate a little alternate shading on the post list as well just to differentiate all the posts. Moving on, this was my workspace the other day, see what I mean about so much on my plate 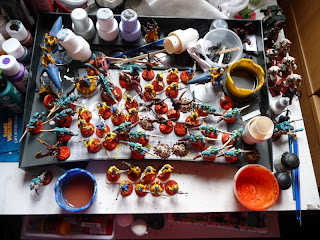 Anyway, this is the layout for a battle between my son and nephew. Things have been a bit strained recently family-wise and this is the first time they've played 40k together in months. I'd set this up just before they came home from school and my intent was just to drop them in at the deep end but I hadn't left the room for more than a minute before I was being called back. They eventually took the hint though and my son used his Eldar versus his cousins Tau. 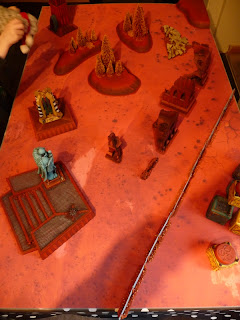 They ended it in a draw, but I'm not sure how many turns they got in but again it was 500pts and I don't think they did more than 3 turns at the most so it's another shadow of doubt over what will go down at Warhammer World in June and whether my son will last the first match, let alone all three at 1,000pts... 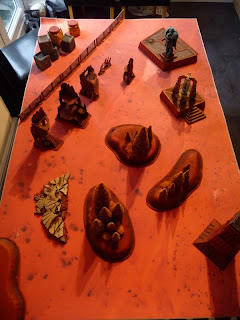 It was also Gaming night last night, no pics, but I had a showdown with PeteB and 1750pts of 'mighty, mighty Eldar' as they say. I managed to scrape a win, but not having played for weeks and only then fielding 1000pts I was a bit frought trying to keep up the pace and not dawdle too long over decisions. Highlights included:
PeteB played a good game, with Eldrad casting plenty of powers to buff his troops and make my psychic efforts pants. I'm going to treat him to some unit markers so he knows what power has been added to which unit. So watch this space Eldar fans.
Posted by 40kaddict at 12:50