Last match of the day and by this time I'm  dead on my feet. Dawn of War set up, Annihilation with a Secondary objective: 2pts for killing 2 units in close combat, 4pts for killing all enemy troops in combat, representing taking them prisoner.

So, up against Blood Angels. I put the Hive tyrant, Tervigon and the Devgaunts down, all he places is Mephiston. I don't do much and eventually he brought on his troops and vehicles. My Hormagaunts and Adrenals come on in the top left, the Gaunts head for an assault squad but the pinch point between the two terrain pieces mean not all of the 21 get to assault but after all the hit rerolls for scything talons, and wound rerolls for ST+1 Adrenals and Toxin Sacs means that he has to make 13 armour saves! But with a Priest attached to the squad I think I sliced and diced only 2. In return he butchered them with bolter and chainswords 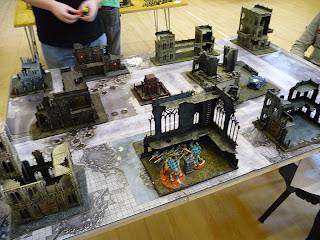 The Doom had popped in the spore in the bottom left of this shot, he took a few of those Assault Squad lives but he was instakilled by gunfire. This made me chuckle and laugh as I pointed out he could no longer claim the 4pts for killing him in combat. We then looked closer and as it says "enemy troops" we decided that as he was an Elite he still had a chance to go for the 4, but he had a lot of troops to kill yet. 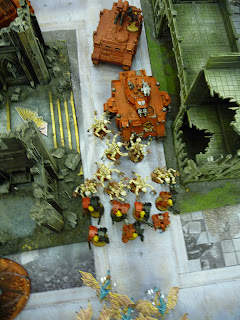 As you can see below, the Blood Angels assault squad is pretty unmolested on the left so I think they went through the Adrenal Stealers too, including the Broodlord! I also think my Trygon Prime had popped up in front of the Baals but Mephiston had swooped in and sliced the guy to ribbons like he wasn't even there. I think I've purged most of that horror from my mind but 6 wounds were no way enough! 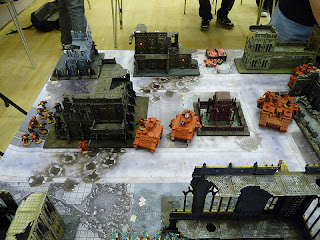 The Hive Tyrant didn't do much in the game, he tried a bit of shooting it may have penetrated but nothing came of it. 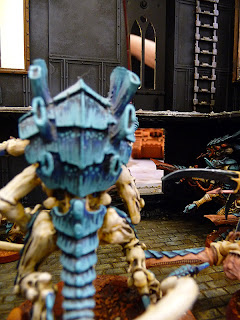 As the game progressed it started to look conceivable that my opponent could in fact do a clean sweep of my troops through combat alone so I tried to make this a possibility. I could have hid my remaining forces and tried to eek out some small satisfaction in hiding but that would be no satisfaction - Tyranids will attack and so the warriors and Termagants all moved forwards to shoot and assault where possible. I'm not sure if they were successful, those darn FnP save negating most of my unsaved wounds. 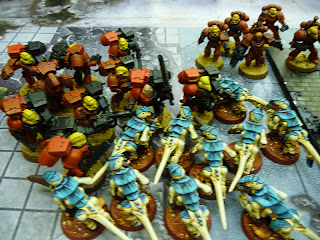 Mephiston continued his massacre of Monstrous Creatures by felling the Tervigon. I'm not entirely sure what his rules are but if he had some dice rolling to add to his attacks I'm pretty sure they were always the maximum possible, he was a beast and made mincemeat of my most dangerous figures. 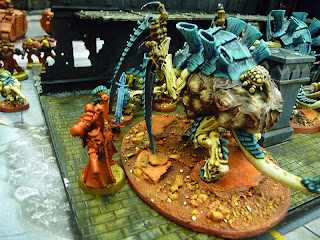 Last to be brought down was the Broodlord and all that remained on the table was the Biovore [heavy support] so he did manage the clean sweep of troops which surprised the organisers. 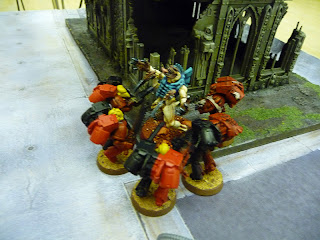 I know that sounds pathetic, that I had 45pts remaining and did so little damage but I think he had to work for all those points. He didn't suffer for it but I think there was definitely a challenge there, even if it was a foregone conclusion.

In the end I placed 14 out of 16, I think I could have done a little better but I'm happy with that. I think with a bit more experience I could be less surprised and more focused on the game. The biggest concern for me is one echoed around the net at the moment and it's Space Marines. Actually Space marines aren't that bad, sure they've decent armour and can shoot straight but it's the non-codex Chapters that are a concern. Experiencing, Space Wolves, Grey Knights and Blood Angels on the same day, all marines with extra benefits - a nightmare. It's bad enough facing those accurate shots and getting through their power armour but when they're getting back up again and ripping the earth apart beneath your feet then it's irrelevant whether they have three or four tanks, which is my usual concern given my lack of anti-tank, as the marines themselves are nigh invincible.

So, more games to play, this was a baptism of fire, not just in competing but keeping organised. 2,000 pts is an awful lot for me and in preparation for the Warhammer tournament I'm going to concentrate solely on 1,000pt battles, to get used to my options, tighten up my play style and become more familiar with my force.
Posted by 40kaddict at 11:02