﻿Now that my Son is showing interest in his Eldar we're slowly getting back to his Fire Prism. I suggested we do the same technique of filling the crystal with a suitable Gel as the Plasma Generator, this was before I noticed the Plasma Generators 'evaporation protocol'. I did have a cool childrens toothpaste that was a really deep blue, with tiny metallic flecks in that would have been awesome but would not show up in contrast to the weapon barrel itself which would be blue to reflect the Iyanden colours scheme - yellow for the Falcon chasis and blue for the turret and cannon. So I opted for some yellow Johnson's baby shampoo. 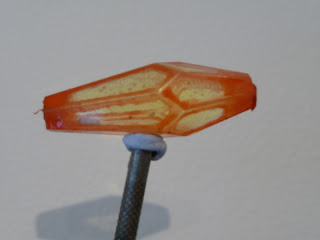 I glued the crystal together then drilled a large hole in one end and a small air release hole in the base. Then I used blu-tac to form a seal between crystal and shampoo bottle and squeezed. 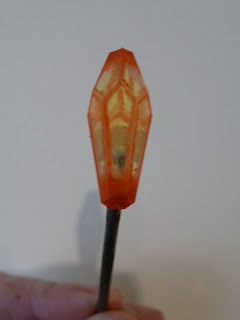 Eventually it filled up, but as you can see somehow the blu-tac got in the way and a small plug of tac ended up inside the crystal :( Nothing to do about that but I then thinned some Vermillion and had at the edges to try and show there was some glow effect happening, which I hoped to carry onto the crystal frame matrix. 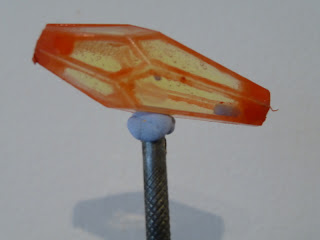 Here's a quick dry fit of it in place, it looks dandy don't you think? 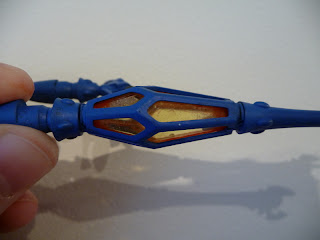 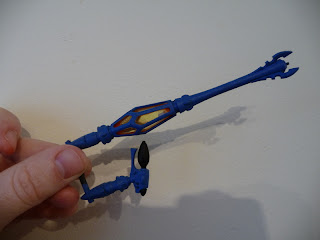 Here it is against a black background and under lights which makes it look more dramatic and glowy. 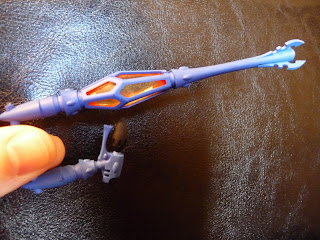 But what about the firing crystal? I suddenly wondered what would happen if I mixed food colouring with gloss varnish and quickly mixed some up and anded up with this result. I think the mix was too much colouring as it didn't dry quite like this, the orange contracted significantly  in the end. 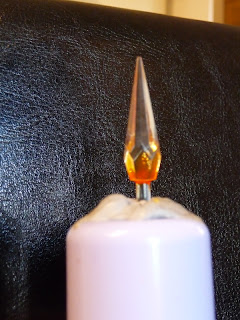 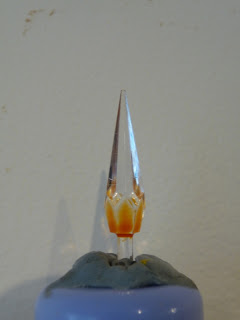 Here too was some glowy FX on the targeting heads-up displays, didn't look like this a few days later I can tell you. 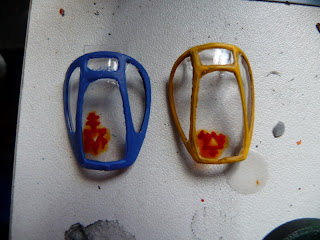 Part of me feels that if we're supplied with these cool clear components you should use/enhance those properties instead of giving in and painting over them. However, the blu-tac in the focussing crystal expanded ﻿and fluffed up over the next few days and and air bubble somehow appeared, the end result was not what I expected. The firing crystal too was a let down. I'm sure if the ratio of varnish to colouring had been more the result would have been better but as it stood I took the easy option in the end and over painted the lot with Iyanden Dark Sun then painted my own crystalline graduation FX in place, that'll be fun to show you soon, although the cockpits remain clear.