Warrior to Hive Guard conversion v2.0 as I continue to mine gold from my amazing bitz pack I work on the second Hive Guard this time here's a shot of adding the end of the crushing claw to the torso. The inside of the base of the claw is gouged out a bit to have a channel. With a bit of flattening at the top of the Warrior torso this should then fit snugly together. 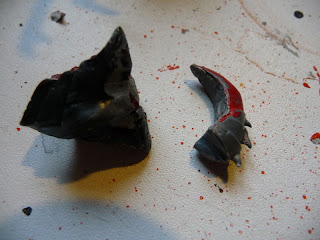 Here it is in place. One mistake I made with v2.0 was that I had sliced off a few millimetres of the base of the claw to make the 'crest' not stand so tall. This time I forgot so it stands prouder than I was planning for. 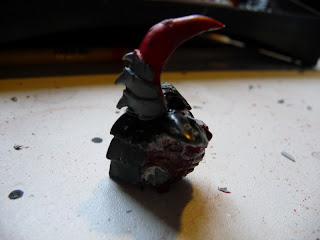 One reason for this is that I wanted a little variety in height for these two Hive Guard. I have some third party plastic 40mm bases that are 2mm lower than the GW counterparts. I'd opted to use these to make this Hive Guard shorter than v1.0 but thanks to the taller crest they are roughly the same height, although their profiles are markedly different. Also of note is just how far you have to position the legs - right on the edge of the base. If you mover them forward any further the figure becomes unstable, thanks to the size of the Impaler Cannon. 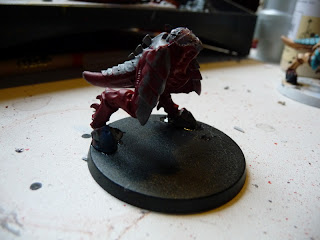 And here's the big difference, extra armour plates from the Termagant upgrade sprue. You've bound to have loads of these, I use two of the pentagon shaped ones with the slightly more ridged triangular plate as the final one at the base. This better reflects the more armoured nature of the Hive Guard, when you see the actual model the head is protruding from the carapace with both a crest at the front and back, with the front one obviously being smaller. 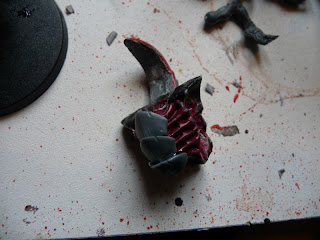 In the end I was so pleased with this addition after I painted v1.0 I painted up three armour plates while they were attached to their sprues and just glued them in place on the finished model, you'd never know they hadn't been their all along.
Posted by 40kaddict at 12:14