With all the nids and the Codex that my son initially got there was no HQ model and at the time there was really only one model I could consider - a Tyranid Prime, but if I converted one of his three warriors I'd be one short of a brood, what could I do?
Luckily I had a near complete 1st Generation plastic Tyranid Warrior from Advanced Space Crusade. I don't know how I got the game, I'm pretty sure it was bought off one of my mates but at the time I think it was primarily for the scouts. My plan at the time was to have a load of Space Marine scouts with power shields and bolt pistols. They were relatively cheap points wise and those home made power shields looked really cool [I'll post one of them up when I get chance]. Now they're redundant but those 'nid warriors suddenly gained a new value...
I had plenty of pieces, some broken, torsos, claws, deathspitters and bone swords. However, when it came to legs I was a little lacking. I had one near complete warrior but it had a right leg attached and only another right leg. So I had to chop the right leg a bit, I built a joint to pin the leg and where the joint was on the other side I 'mauled' it a bit to look like the 'skin' texture'. I also had to split the knee cap, bend and cover in poly-glue and sprue shavings to adjust the pose, this also meant shorten the tendons. Even then the pose wasn't quite right so a handy bit of slate helped balance the model, give it a bit of weight on the base and make the pose more dynamic. Picture 3 shows where most of the second right leg was adapted to be a left leg.
The second part of the conversion wa sthe head. I wanted it to fit in with the other warriors so I took a spare tri-crested head from the warrior sprue. I carved out the mounting point, anywhere behind where the face is glued on [sorry for not having any picures of this]. I carved and carved till it fit roughly on the 'nid head. Any gaps were covered up with spare Termagant toxin sacs as extra Synapse emitters or toxin sacs. A further piece of Termagant armour was added at the back for even more 'cresty' goodness. You can see a lot of this on the close-up in picture 6.
Lastly I got some of the Warrior armour plates and put these on the shoulders to bulk him out a bit more, he is a bit too much insectoid so that adrenal gland on his abdomen also helped [I think a bit of cutting was needed to get a decent fit]. And to finish him off I managed to glue one of the 'implant' tongues. I hadn't wanted to use it because I'm convinced it'll snap off but so far it's done OK. 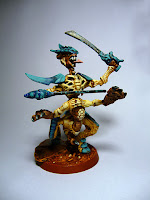 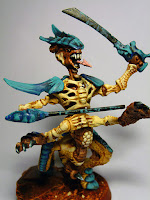 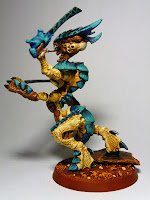 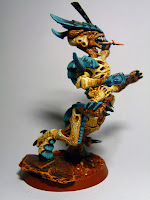 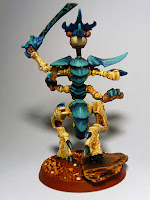 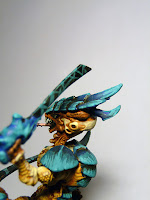 Overall I was really pleased with this conversion. It was one of my first since falling of fthe wagon and it reused some old and previously useless figures. The conversion bits brought it in line with the current range and most of all the sheer size of the beast when you compare it to it's bretheren really shows it as something a bit special. There's no disputing it's the PRIME! What do you think? 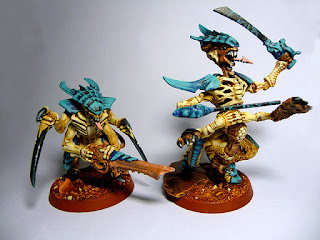 Mea﻿nwhile on the battlefield he's had mixed results. He's great in bringing up the WS and BS of the rest of the brood. I'd kitted them out with deathspitters and a Barbed Strangler. Without his influence their aim isn't so good, with it those deathspitters are lethal! Now I know a lot of people run warriors purely in close combat, and I may have made a mistake not doing that but I didn't want my son to have an army which didn't have anything to shoot in the shooting phase. With the Prime in tow these guys have always done alright, in fact I've wished the Primes rending claws and twin boneswords were the swords and a deathspitter. If they're getting up the field without any run moves so they can fire he's effectively doing nothing until he gets in combat [even then he hasn't performed as I'd have expected, he failed to take Abaddon's last wound once].
I could still convert the deathspitter in place of the claws... and I've a few more bits of old Tyranids left over for another conversion...
﻿
Posted by 40kaddict at 12:32