﻿This Reaver titan was painted in my early style with either stippling or sponging to gettlt the mottled carapce colour. The reds used Humbrol Acrylics Red Gloss colour which is really opaque and glossy but I wet highlighted with orange and yellow to get the results you see below. 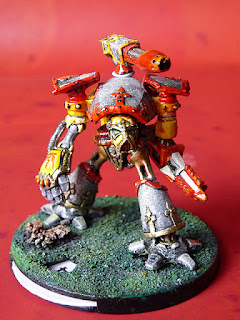 Below you can see I used some of the transfers on his close combat fist. I had loads of these and the ones specifically for Imperial Guard weere also nice on titans, where appropriate. 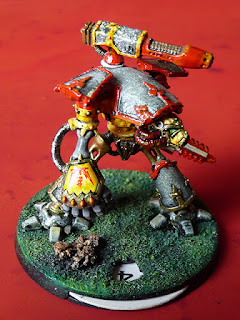 Another intersting load-out. I though long and hard about these, well you have to when you're ordering specific weapons instead of going with what came in the blister pack﻿. Here, he's armed with a harpoon missile, power fist and Plasma Blast Gun. 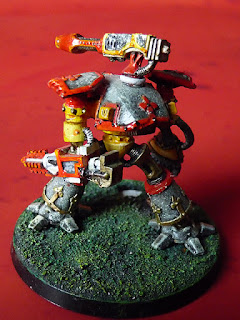 I've still to take photographs of the rest of my mostly unfinished Warlords [around 5] an unfinished Reaver and the incompete Warhound, but I'll drop in some of my Ultramarines next﻿ - watch the skies, death from above!
Posted by 40kaddict at 15:14