I love Warhound Titans. I don't really like them in 40k, especially not the Lucius Pattern but I loved them in Epic. The idea of two loping titans scouting ahead and coming in from the flanks always appealed to me. Quick and dirty, here's one of my War Griffons, I'll photograph his sibling at some other point, he's less finished. 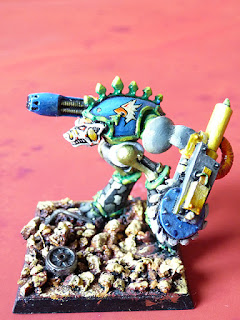 As you can see he's armed with a Plasma Blast gun [am I right?] and a combat saw, just right for darting in to slice up some other titan. I also managed a little Griffon logo and you can just make out a kill mark on the top of the carapace I ca. 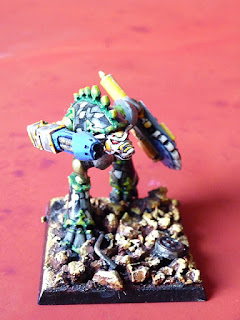 Obviously the colour scheme fits the War Griffons but there are accent colours, like the green and blue. His brother is red and yellow﻿ accents and had an equally interesting lead out. 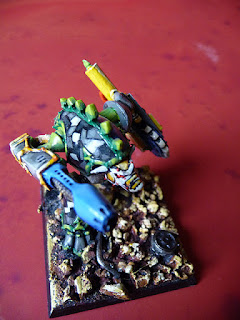 Here's a shot where you can see a little more of his urban camouflage Griffon scheme.
Posted by 40kaddict at 15:13