War Griffons were my Titan Legion of choice. I came across a relatively easy way to paint my Titans, whic I'll come to later. Did a couple of Titans that way and then abandoned it for a slightly more laborius but much better solution that was really easy to do, again have patience. Meanwhile here's a promo pice from a White Dwarf older than my adult teeth. Not sure where the rest of the insignia pages got to, or why I never bought Codex Titanicus, the book this plate was from, but we'll just have to enjoy it for what it is. 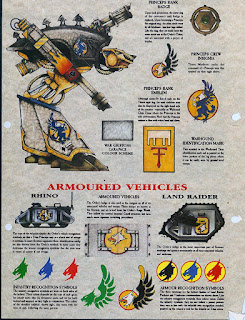 ﻿
Yeah right, Land Raiders and Rhinos﻿ as supprt vehicles for the Titan Legion! Those were the days. Funnily enough I keep forgetting about Hive Fleet Leviathan. According to the Tyranid Codex Gryphonne IV, the forgeworld home of the War Griffons was destroyed by Hive Fleet Leviathan. Many worlds in the system were evactuated or destroyed as the Hive Fleet approached but they thought the forgeworld would survive with their massed titan legions and Skitarii support. They were wrong. So it's kind of odd that once again I chose a force that later on in my GW history would be diametrically opposed to my son's choice in armies.

Some Warlords coming up next, showing the two paint schemes.
Posted by 40kaddict at 16:40