My first War Griffon Warlord Titan. I have no recollection of why I chose this load out, I must have favoured it for some reason. Anyway I either stippled or used a sponge to get the mottled grey effect on the titan. I also got to play around with yellow [my favorite colour ] and add some battle damage and a small amount of weathering. 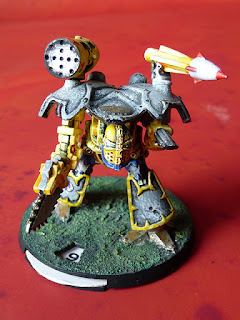 The next titan was painted in a similar fashion, only when I had completed the stippling I then used a fine brush and lined out some urban camouflage. Darker sections and white sections were then added to complete the effect. Although no amount of camouflage will hide a 100m tall G.O.D.machine I really liked the effect and aimed to employ it on future titans. Of course there was an upgrade of Cameleoline paint in Adeptus Titanicus [gone in later version of Epic] so it could work. 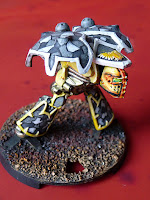 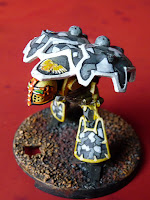 What you can't see in these pictures is the two rocket thrusters on the titans 'big end' you can just make out the nozzle of one in the picture below. This titan was going to be fitted with a titan jump pack, again an upgrade only available in the original Adeptus Titanicus. Scorched earth base effect was nice too... 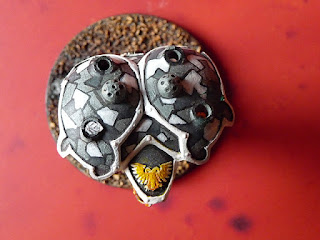 Oh, have a nice Christmas tomorrow, hope Father Christmas brings all the plastic little men you dream of.
Posted by 40kaddict at 15:12