Afternoon #WarHamFam and #WarhammerCommunity I've been #PaintingWarhammer my Ravenwing Talonmaster. Really I should have taken these pics against black, given their colour scheme 😉 but white will do. 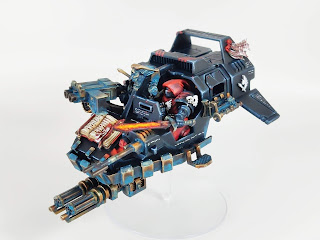 Monkeychuka will be most pleased with these unadulterated images, he's right they do show off the painting a bit more, even though they're a little less atmospheric. 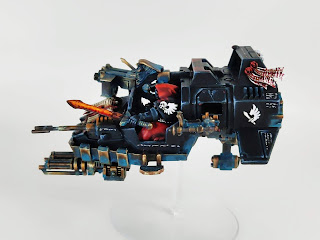 It's weird seeing some of the finish as the weathering in particular looked over the top when I first did it [so long ago]. However, now I think it's fine and fascinating to see how the Turquoise pooled. 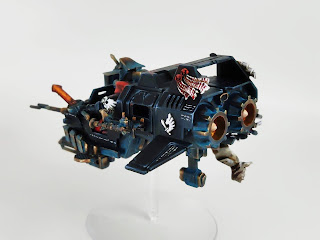 The glow FX aren't exactly my best on the jets, but again I think the overall look is worth more than the effort I put in. I'm getting a lot of satisfaction from the 'cost/benefit' ratio out of this, the cost being my effort in achieving an effect. 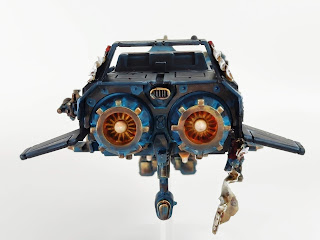 I mean this angle makes those jets look really good, framed with the aged bronze and then the BLESSED VERDIGRIS. I've loved that effect since I first did it on my Dark Vengeance Plasma guys 8 years ago! 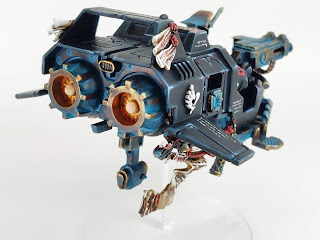 It's often a bit hit and miss, like my purity seals but for the most part the result works out OK. 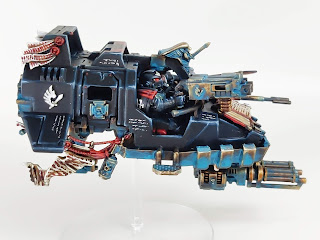 I also added my 'Bear Claw' tribal stripes, both on the crew and the top of the Land Speeder. 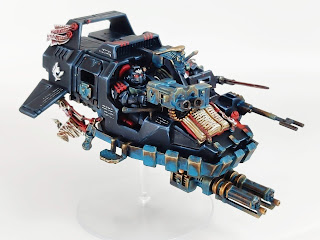 I did the ones on the top both diagonally left and right, the existing Speeders ones is angled right and one is angled left, so it had to be both, as the 'tip of the spear'. But you can just make out the angles aren't quite mirrored perfectly, which is annoying. I'll stick to one set in future. 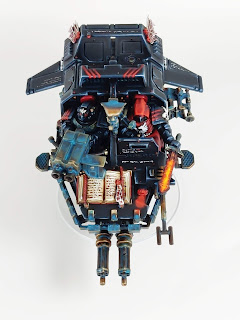 Close-up of the 'lava' sword and the Talonmaster's tribal stripes. 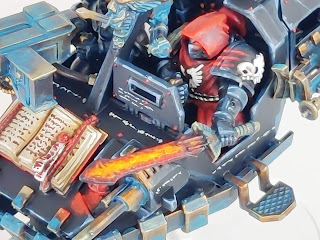 The Gunner's tribal stripes and the now obvious simplicity of the highlights. I think the eye lenses were even simpler than usual, with a few less steps but I don't see much of a difference. 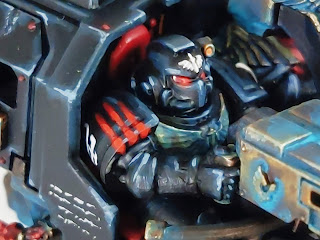 That BLESSED VERDIGRIS tho! And to think I wasn't going to add the hood ornament, but what was I going to do with it otherwise? 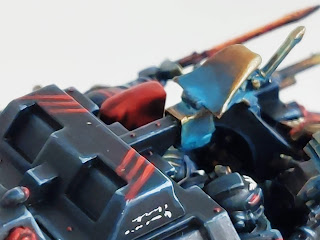 And here we are swapping out the radar dish and honour badge for the Typhoon Launchers. 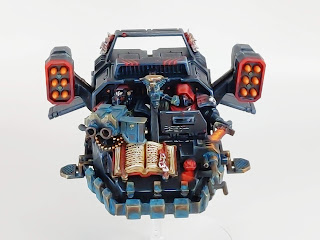 The orange missiles are a bit more vibrant than my previous too, thanks to Trollslayer ORange. 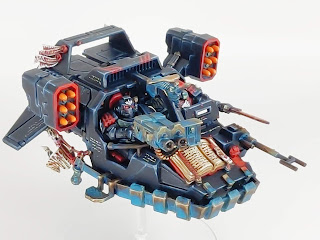 And I love how that ties in with the Power Sword colours, something a silver blade with blue highlights would have introduced more colours to the palette. 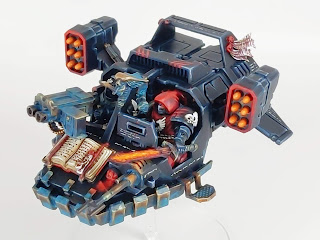 There were still some bits of Tamiya Clear colours to add and I do need to glue some of my Speeder bases together but I really, really love a Speeder squadron.

That's one of those items I think I'd just keep buying more of, unnecessarily! Anyway, since this I didn't quite capitalise on the momentum with my Attack Bikes, just some metallics added. That's because my son is back from university and we've been watching the Expanse. 🚀  Which if you haven't watched it you should as it's possibly the closest thing we have to a 40k TV show right now. The final season in particular has some excellent space battles.
Posted by 40kaddict at 12:13