Afternoon #WarHamFam and #WarhammerCommunity and my second Blood Bowl match and I'm up against David's brother Tim's Dryad team. Its a fascinating army with some 'young' treemen, some Birch and Willow trees. I think the Willows absolutely terrified me, the were strong and all had the equivalent of tentacles and prehensile tails. Essentially once you were in their tackle zone you just couldn't get out. This time I was on my own but I was receiving the ball at kick-off. 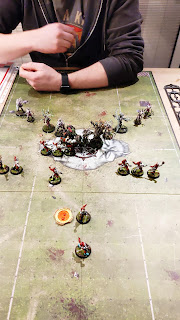 I managed to move over to my right wing and even formed a rudimentary cage round One Eyed Jim. I actually had a play in mind to draw his team over to that side and then reverse and sweep up the left. 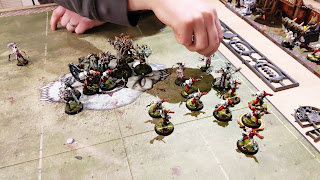 And it somehow worked. Everyone in my team moved over to the left. But there was a particularly sneaky move where my catcher had been knocked down. I knew he couldn't get past the Willow that did it, so I just kept him on the ground. When the Willow eventually moved on he got up and sprinted down the right hand side and then looped over to the middle heading towards the end zone. OEJ snuck up the baseline and completed the pass. Learning from my first game I mooched around in Tim's back field to draw out time and scored at the close of the first half. 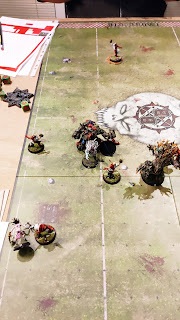 I think I messed up kicking in the next kick off, and positioned it too close to an edge and naturally it scattered off in the direction of the nearest sideline! I think Tim was able to gift the ball to a player and relatively quickly score to draw even 1:1. 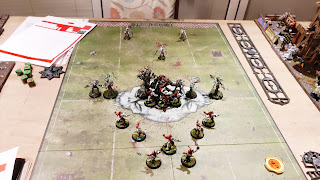 Again I'm vague about what was happening. Often I would just look at the board and my mind would go blank. I was so overwhelmed by my options and then trying to stack them in order of easiness/chance of success/absolute must take place which was difficult to work out. I also always forgot to roll Bonehead for my Ogre and constantly forgot to turn my models round to show they had made an action. 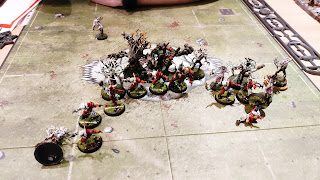 I think at some point I made another break for it and inevitably a 'go for it' roll left me on the ground and Tim was able to snatch up the ball. 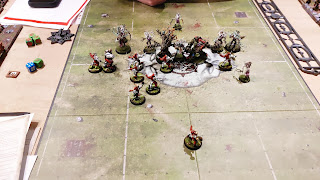 I don't think I was able to recover from that mistake and I was outclassed at the end to lose 2:1. That said I found the game far more tactical and rewarding than my inexperience should allow. There were plays I'd tried and that felt good.
Posted by 40kaddict at 12:05