I managed to arrange a little game with Otty in preparation for Double Trouble 4. Never having solely used my Knights and with their new rules it was a perfect opportunity to familiarise myself with my 3 guys. The main issue with taking the Lancer is you automatically lose half your Stratagems as they invariably work with Questoris Knights, or those with specific weapons. Take away any other Knightly houses and I was left with just on page of Stratagems to choose from! I gave the Lancer Land Strider to add 2" to his move and the Warglaives too. He also had the Sainted Ion Armour for a 2+ save!

Otty brought 2 Broods of Genestealers [one maxxed out], a Broodlord, a Neurothrope and 6 Hive Guard. Otty got first turn, moved the Neurothrope into the crater and the Hive Guard into range of the nearest Warglaive. The fired off two salvoes, taking it down to just 2 wounds 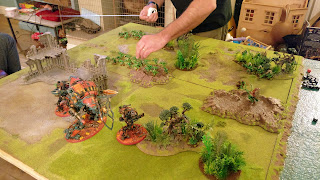 Big Brood advanced, little brood conga'd to secure objectives. No combat this turn but the next turn? 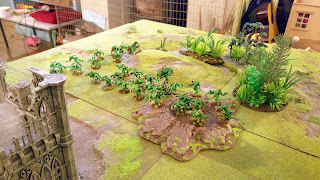 The Lancer advanced, [14" move +2" Land Strider + 2D6" Advance!] so he was really up in their grill first turn. The shock lance put a couple of wounds on the Neurothrope and the charge managed to catch both it and the Hive Guard. I did a lance strike and Titanic Foot Stomp each on both units. I think I killed two Hive Guard but the Neuro remained intact. 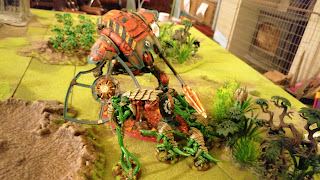 The wounded Warglaive held an objective, it's twin managed to kill 1 Genestealer with its Thermal Lance and hold the other. 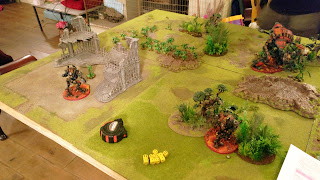 Genestealers sought revenge for the loss of their pal. 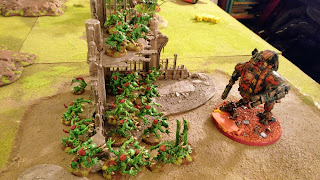 Neurothrope smoted the other Warglaive killing it [he had an auspicious first game]. 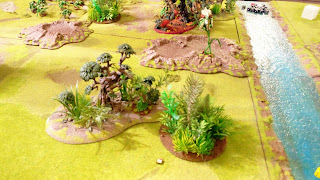 The Neurothrope was very pleased with itself! He even healed his 2 wounds back with a stratagem. 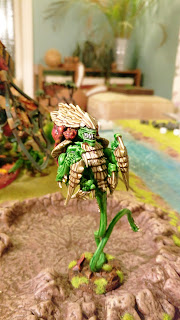 Stealers surrounded the other Warglaive 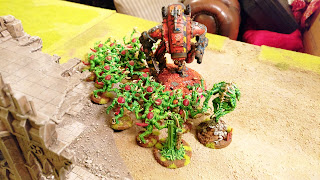 And ripped it to pieces with 80 attacks, hitting on 2s, wounding 5/6s re-rolling 1s [Gorgon]. Neither blew up either, just collapsing in on themselves. 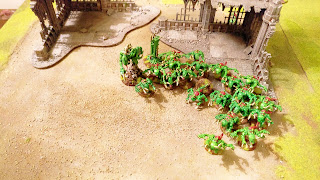 In retaliation the Lancer fell back, shot the Neurothope 2 wounds again then stomped all over the Hive Guard! S8 on Titanic feet is awesome! 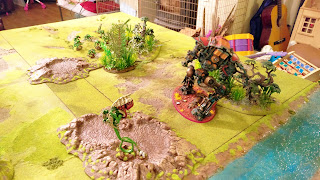 Can't recall how the Neurothrope died, maybe the shock lance did more than the 2 damage? The Broodlord did 6 Smite wounds on the Lancer though as the small Stealer brood closed in. 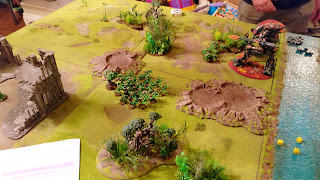 I couldn't kill the squad though, one survived to secure the objective while the Lancer was on 19 wounds. 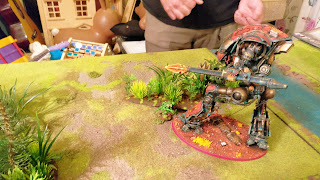 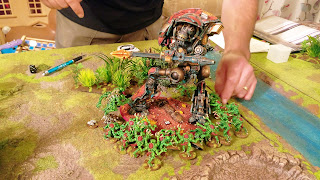 The Broodlord itself very brave to get within range of my lance, but after the massive Smite last turn took psychic feedback with double 1 perils for two wounds on itself. They could only put 4 wounds on me, keeping me within the top tier [House Hawkshroud looking pretty awesome right now] 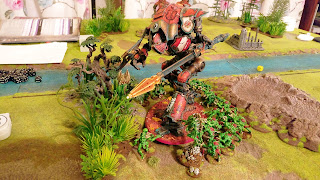 In return I kebabed the Broodlord and stomped the lone Stealer [for Blood Points] and then stomped a couple from the big brood. 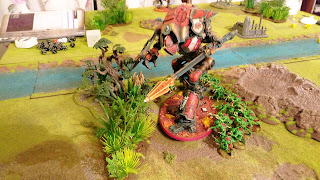 The end game, for honour and curiosity. Otty had won with objectives it was just a matter of seeing who would kill who first. With Fall Back, shooting and attack the Genestealer still managed to knock me down to the bottom tier. This made it increasingly difficult to land stomps. 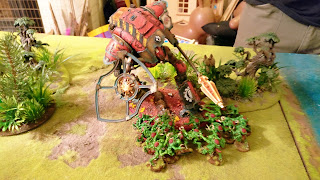 But I thinned the brood, reducing their claw attacks. 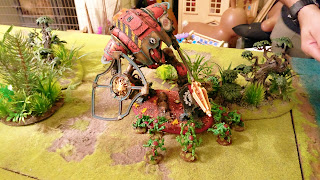 But not enough as they sliced through my armour and the Lancer too fell without fanfare or explosion. 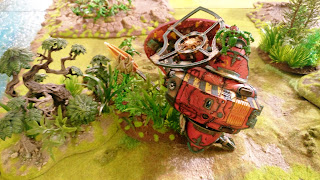 The conclusion - Land Strider is probably unnecessary in this force - they're pretty fast anyway. +1 attacks is more useful as an extra stomp would have made all the difference against the Stealers/Hive Guard. Not much I can say about the Warglaives, perhaps learn not to 'sell them cheaply'. Hopefully at DT my pairings will provide numbers to hold objectives instead of half my army standing around doing nothing until they were swamped!

It does show how effective a large blob of Stealers can be - they killed a Warglaive without loss and took the Lancer down nearly 600pts and they were still alive! Anyway, bring on Saturday!

If you're interested in any more of my Battle Reports, point your cogitators here: www.40kaddict.uk/p/battle-reports.html
Posted by 40kaddict at 12:14