Just a quick one, in amongst completeing the previous future containers I decided to embelish this older green container. It followed a similar pattern to the Maersk Line container and I had a spare stencil template to put a big number on so it was rude not to. 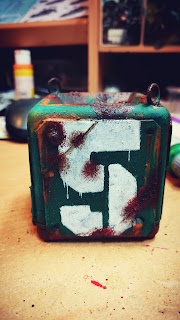 Now although I firmly believe big numbers make anything look cooler there is something about this one that doesn't quite work, perhaps it's just too bright. I also added some more Rhinox Hide sponging and Ryza Rust as well as Valejo Red Oxid paste in places to cover up where the paint has already chipped off. I also weathered up the base a lot to be more durable and fit with the three previous containers. 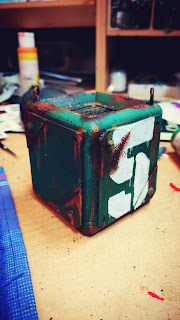 As you can see its overall colour 'silhouette' has changed dramatically. The overwhelming green its now competing with 25% white and the orange and brown is significantly more noticeable. So I'm a little sad I've lost a solid block of colour but I've just got to accept where it's at now. 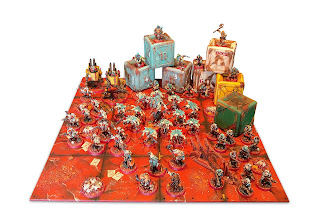 Maybe a little more toning down of the number 5, some silver in places and a varnish. There was no urgency in doing it just something I felt it needed.