I've had two weeks holiday from work but I haven't been away, what I've been doing is finally decorating our back room. I moved out of the 'den' three years ago into my man-cave and it's taken that long to get our act together to finally turn it into a proper dining room. There's still some organising to do but I repainted the ceiling from varnished wood to white - a primer and four thick coats [that primer was the single most unpleasant experience painting I've ever had!]. The walls also got four coats and we eventually got a new carpet down [stain proof to cope with our cat's regular vomiting, she is 18 poor thing] and this sideboard was built. 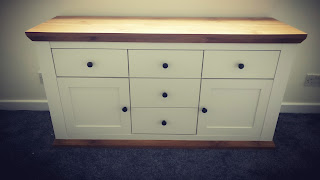 I need to replace the sockets with some fancy silver ones and we'll be getting the table and chairs in soon, which may well be the backdrop for any future games of 40k, if I ever play at my house! But that's what has been keeping me busy these last two weeks, so blogging was put on hold.

In truth my passion for the blog is waning - I'm running that fine balance between using it for my own benefit as a record and wanting it to be successful. The former helps with the creative process the latter is the path to insanity and yet it is hard not to feel a little upset at how the viewership is back to what it was in 2015, although I don't think the medium is dead I definitely think its popularity has waned greatly. Forums too seem to be on the out, 40kforums is closing soon, around 8% of my referrals come from that forum [only just beaten by BoLS].

But I think blogs may never die, but YouTube has clearly taken over and either way the effort to promote your work can be as much, if not more than what it takes to create the content in the first place. The blog is not going anywhere I just need to find the time/mojo to be reinvested in it. That said I have continued apace with my remaining projects of the Hobby Season and [SPOILERS] finished my Old Skool/Nu Skool Rhino/Razorback. 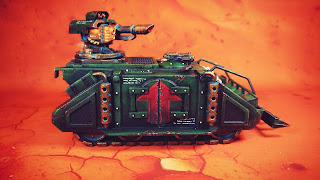 I've also finished up the weathering and varnished the last three future containers, which prompted me to dig out the green one to add a big number on it and some more weathering, I love these things! Like big old kids toy blocks ;) 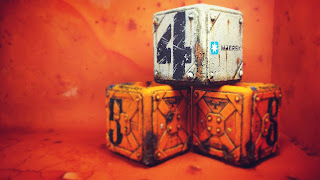 I'll be preparing some TO DONE! posts for both of these. I've been cracking on with building my Knights, both have completed torsos now. I need to sort all the weapons  and get the legs reposed, which Liam has helped with on one. I've loads I want to get on with, its just finding the time to do it.
Posted by 40kaddict at 12:55