Terrain is everything - 40k future container scatter terrain - TO DONE!

Although I was occasionally naughty when i was painting the Bio-titan in that I would get distracted and do some of my future containers there is a benefit when it comes to tackling them alone - there's so much already done. 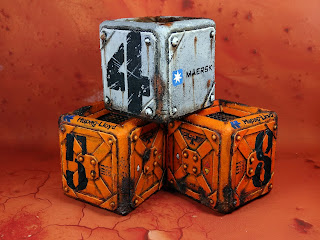 And so they were pretty easy to finish off. That said I can't find a consistent approach to my rusty/scuffed weathering. Sponging Rhinox Hide is a start, followed by Gun Metal and usually a wash to tone it all down. 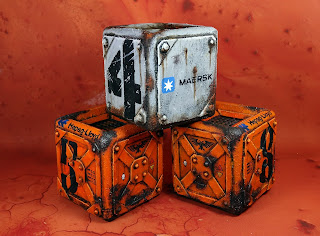 I try Ryza Rust but it just doesn't look right and wouldn't have worked on the Hapag Lloyd containers anyway. The Maersk lines isn't too bad though. 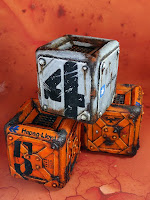 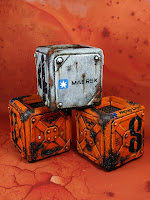 I just love these containers and as I've said before it's such a shame Mentos discontinued the gum they contained. I've started on a foamboard STC but haven;t had time to perfect it yet. 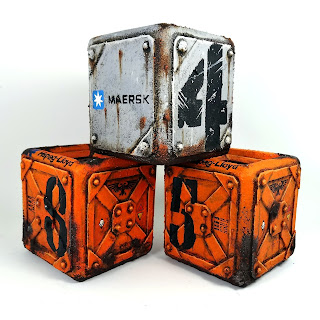 I'm also thinking that you can get wooden, chamfered blocks off ebay and making some reinforcement templates you could achieve something similar. That's not to say Munitorum Containers aren't also up to the task but we like cheap terrain solutions too. 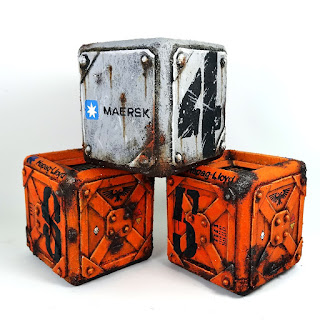 Giddy with excitement I have taken my green container and applied a big number to it and for once I'm thinking it was a mistake. 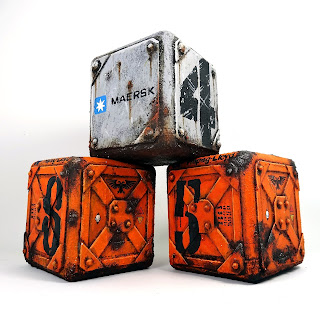 Adding some weathering has shifted it's overall 'greenness' and it looks very different to what it previously was. Nevermind, we'll see if I can rescue it. 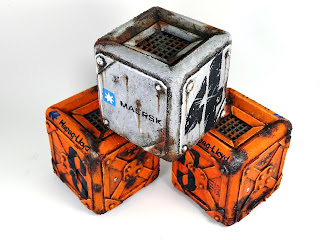 These were great fun to do though and another item that started as a Big Build project, once again reaffirming that although making models is not my favourite part of the hobby setting aside some focus does provide projects that can be completed. Without the making I can't get to the painting! 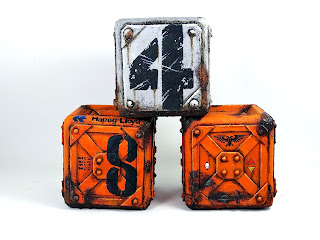 I've a dozen of these now and as I say, although I can't get a consistent approach to weathering I'm definitely happier with how I do them now than years ago. I also have the 'water container' that could be finished off at some pint the construction is flimsy at best so I may not bother with it. 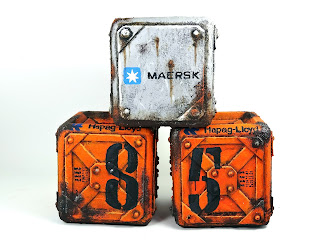 Here's my Big Gamboge Stamp of Approval, I've a few Camera360 shots to share too and then it's my Razorback which also got TO DONE!